Virgin’s Adults Only Cruise Line: Everything We Know

Virgin Voyages, the new adults only cruise line, will debut in April 2020 when their first cruise ship Scarlet Lady begins offering cruises to the Caribbean and Bahamas. 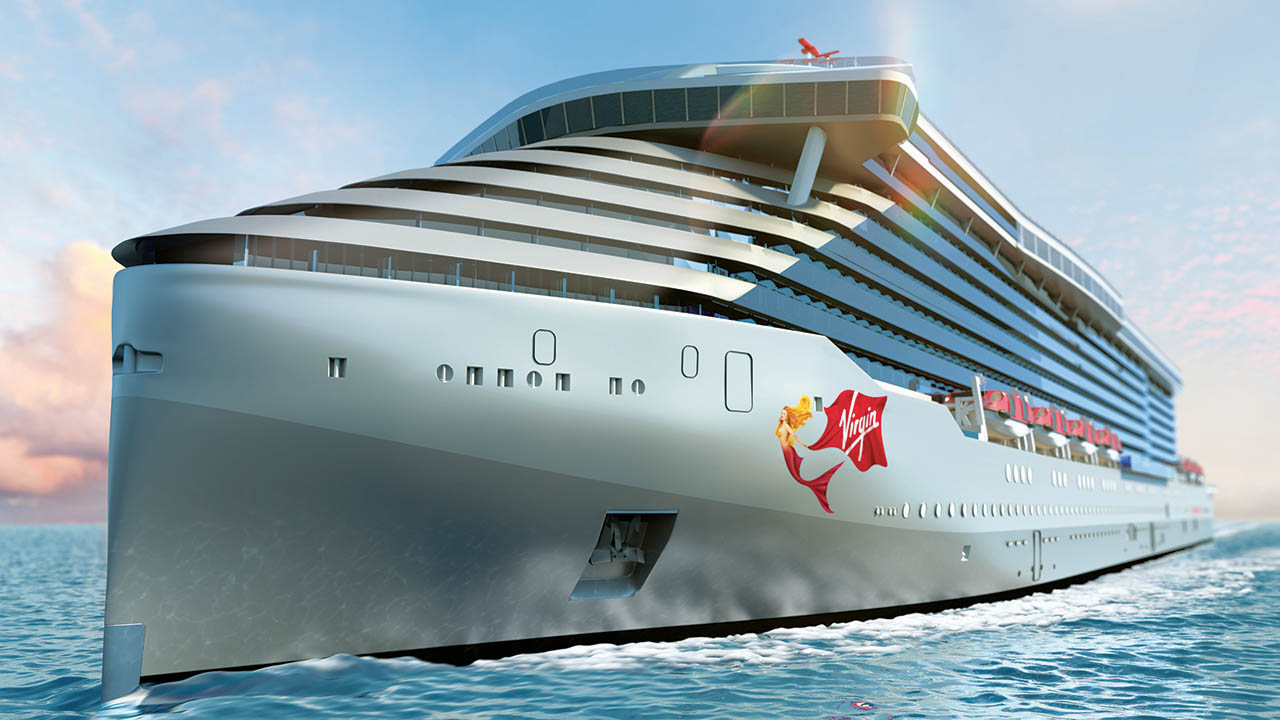 Scarlet Lady, the first of four cruise ships from Virgin, will sail from the Cruise Capital of the World, PortMiami, and offer four and five night cruises to the Caribbean. (Take a Sneak Peek at the ship) Since Virgin Voyages promises to be unlike other cruise lines, here is everything we know so far about this new cruise line.

There will be no nickel-and-diming on board. Cruise fares will include many extras that other cruise lines charge for.

Gratuities or tips, whichever you like to call them, will be included in the price of your cruise. This means that your onboard account will not be charged a daily service fee.

Unlimited WiFi will come at no extra charge. For those who want the ability to stream, you will be able to upgrade to a premium plan.

There will be no formal nights and no buffets or main dining rooms. There will be 20+ places to eat onboard Scarlet Lady and every single one of them is included in your cruise fare. The following is just a few of the restaurants that will be on the cruise ship:

A few of the restaurants will be open 24 hours a day. Basic beverages such as teas and sodas will also be included.

All fitness classes are also included and will come at no extra charge. 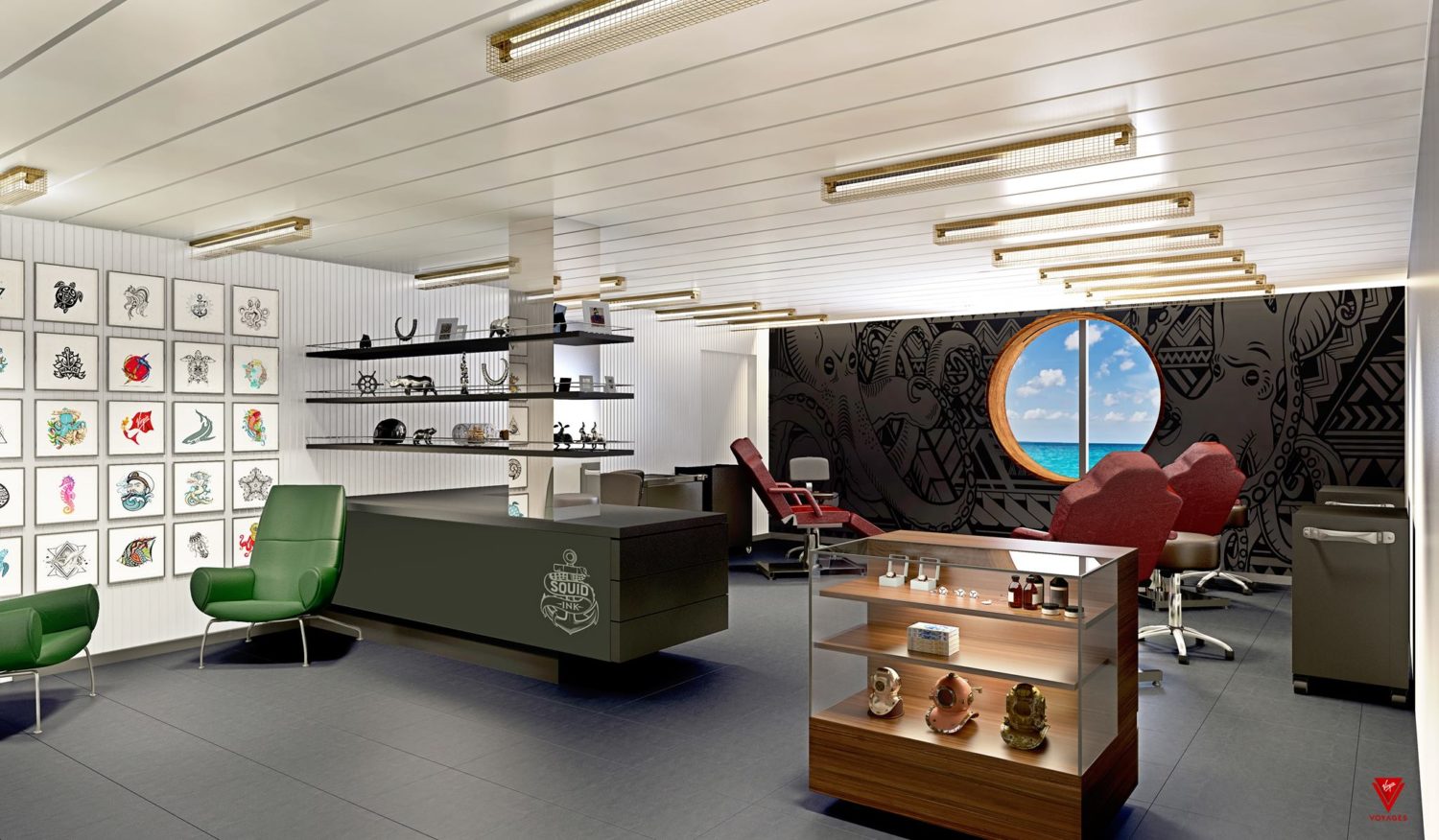 Virgin Voyages is partnering with one of NYC’s most historic tattoo brands, World Famous Tattoo Ink, and their owner Lou Rubino Jr., son of the late great Tattoo Lou Rubino of Long Island.

Scarlet Lady will feature the first transformational cabin beds at sea, single cabins for solo travelers, and 86% of cabins will have a balcony.

While at sea, sailors can enjoy all of the action of the Scarlet Lady and retreat to their private hideaway overlooking the ocean with 93 percent of cabins offering an ocean view and 86 percent featuring a Sea Terrace. The sea will be the headlining star of the cabins aboard the Scarlet Lady with Virgin Voyages’ exclusive patent pending cabin layout designed by PearsonLloyd with Virgin Voyages’ Design team, which uses intelligent architecture to optimize space and views of the ocean.

Virgin Voyages is throwing out traditional clichés on luxury and formalities, and instead bringing Rebellious Luxe to life at sea with their RockStar Suites designed by Tom Dixon’s Design Research Studio as the pinnacle of that experience.

RockStar Suites Sailors will live their best lives all taken care of by the RockStar Services Crew, from time of booking, to sail away and throughout their voyage. There will be backstage access for RockStar Suites Sailors at every corner, with early access to onboard entertainment, restaurants, Shore Things, a private transfer to and from the ship in Miami and an exclusive express VIP pathway to the ship during embarkation.

RockStar Suites Sailors will have their very own wardrobe team to help unpack and repack, complimentary pressing service and nightly express swimsuit drying service– because no rockstar should ever have a wet bottom.

In Rebellious Luxe fashion, Virgin Voyages has reimagined the mini-bar for its rockstars, instead, suites will have a full bar and cocktail kit fit for a rockstar, with the first round on the house.

All suites are clever cabins, with mood lighting that automatically adjusts to match the time of day and in room tablets that allow sailors to adjust the room’s lighting. Sailors will enjoy luxurious comforts like premium linens and a plush European king bed in every suite as well as upgraded bath amenities for pampering.

More photos of the suites that will be offered on Scarlet Lady can be seen here.

All cruises on Scarlet Lady will spend a day at The Beach Club in Bimini. 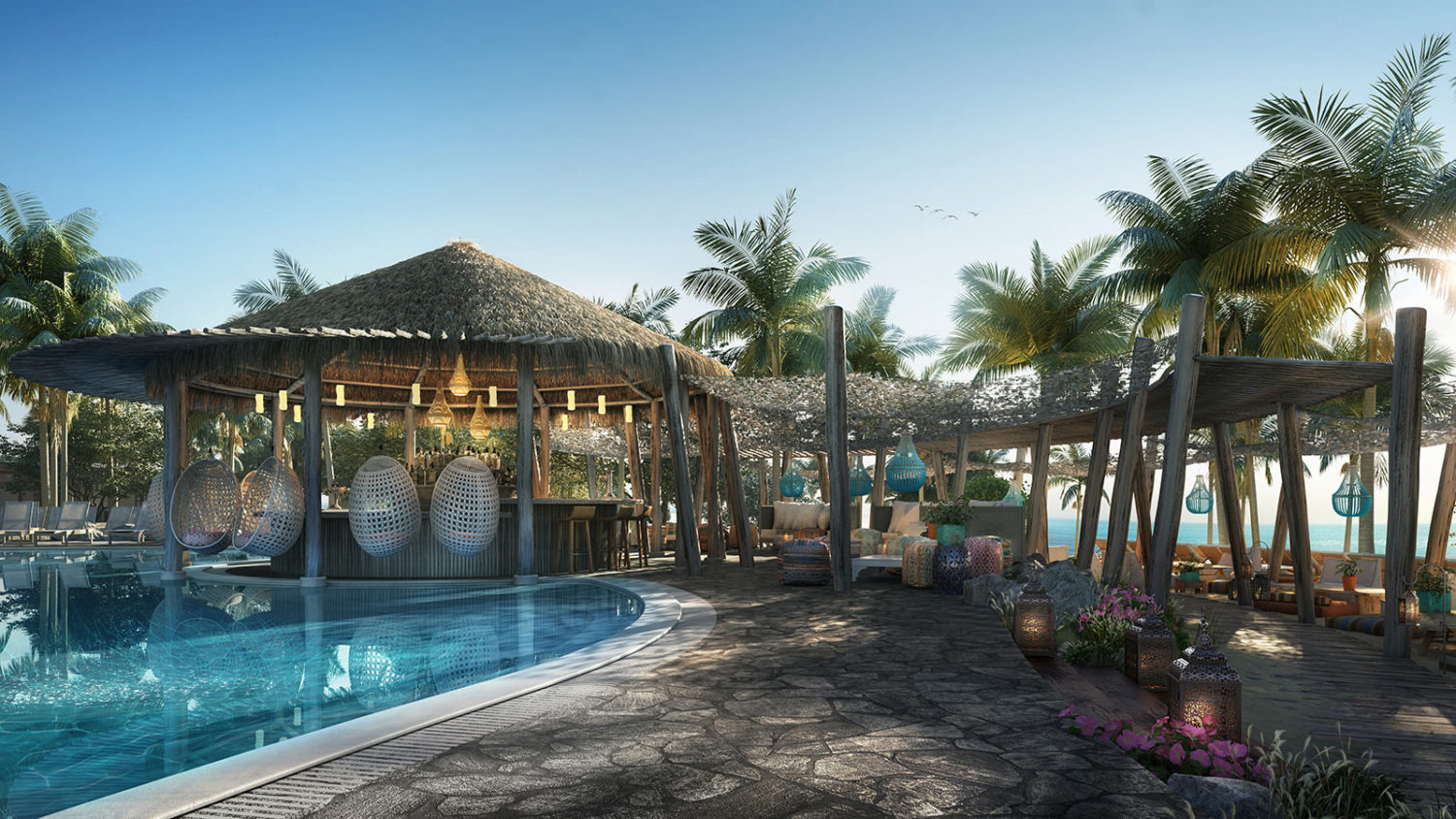 While spending the day in Bimini, sailors can feel the sand in their toes in a stylish setting with white-sand and crystal clear waters and programming that will rival the best beach clubs in Ibiza and Saint-Tropez.

Just a short transfer from the pier, and built by Resorts World Bimini, The Beach Club at Bimini is designed with Miami-based architects EOA, Inc., featuring natural materials and soft earth tones that organically blend into the seascape. The Beach Club at Bimini will overlook the ocean and cascade down to the sea with an expansive lagoon-style pool as the central anchor of the club. 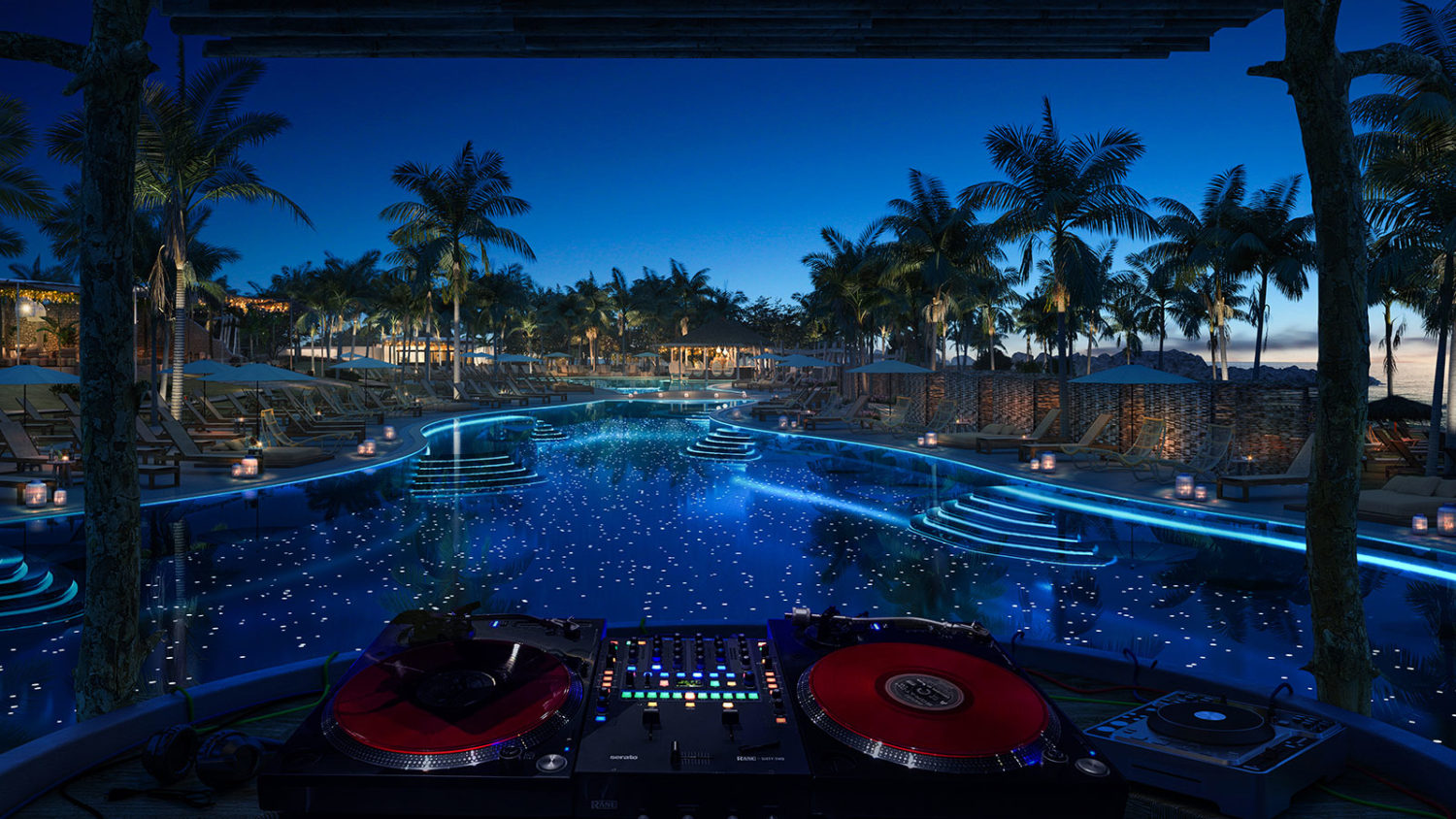 The energy at The Beach Club at Bimini will be gradually amplified as the day progresses and turned back down as dusk settles in. Sailors will reach the high point of the day by the afternoon where DJ-led pool and flotilla parties will be center of the action. The night’s energy will wind down with a beach bonfire to close out the evening with an acoustic musical performance.

Scarlet Lady will be equipped with an on ship record shop called Voyage Vinyl, The Groupie, a private karaoke and gaming lounge, and perfectly curated music and performances by up-and-coming artists as well as music trendsetters for Virgin Voyages’ Sailors to enjoy. 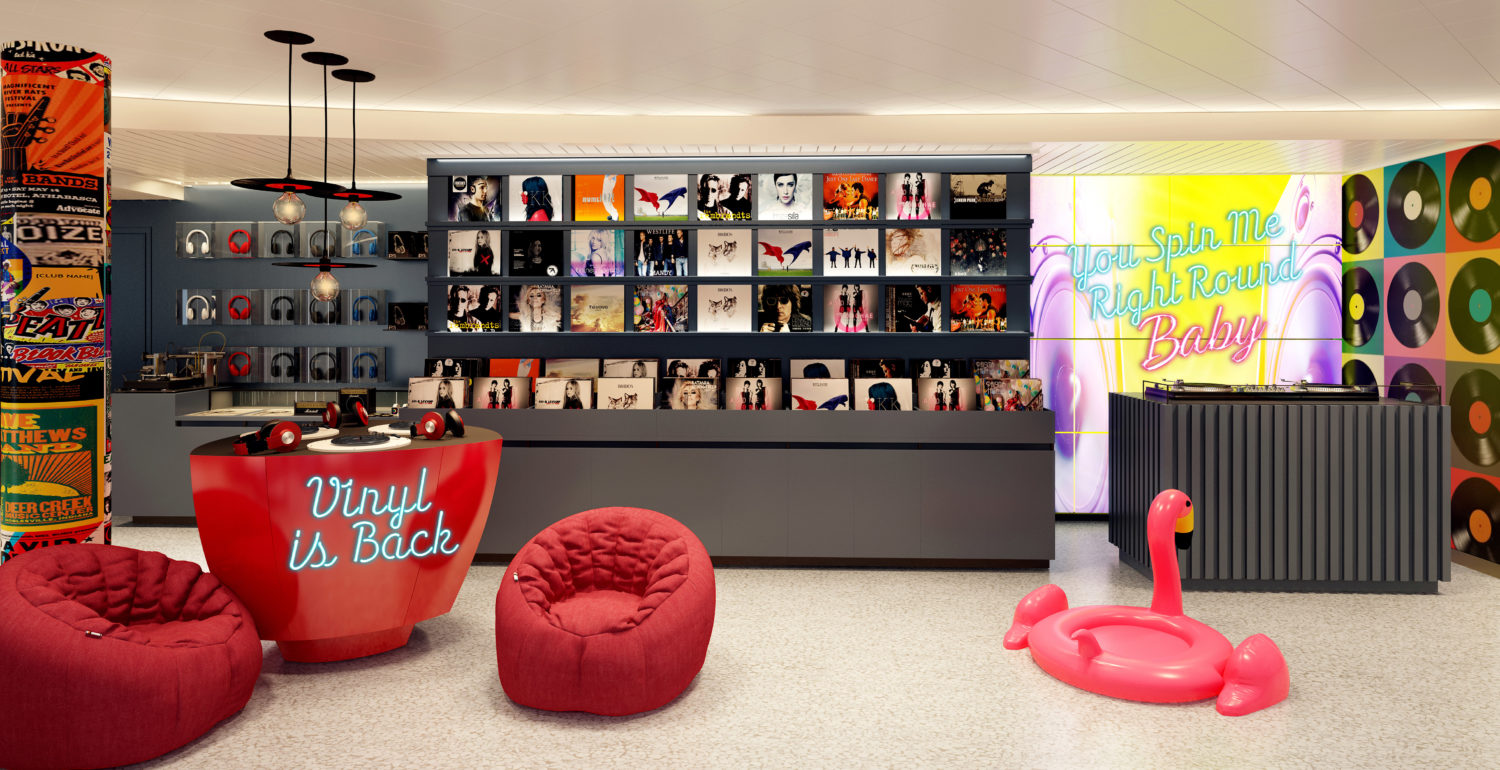 Virgin Voyages will begin offering cruises from PortMiami in April 2020.  The cruise line will have a series of four and five night cruises to the Caribbean with port stops in Cuba, Mexico, and at the line’s private beach club in the Bahamas.  View Prices on Cruises on Scarlet Lady

Ben Souza
Ben is a world traveler who has visited 40+ countries and taken over 70 cruises. His writings have appeared and been cited in various media outlets such as Yahoo News, MSN, NPR, Drudge Report, CNN, Fox, and ABC News. Ben currently resides in Cincinnati, Ohio. Follow Ben on Instagram. Visit Ben Souza on Linkedin. You may email Ben at [email protected]
Cruise NewsVirgin VoyagesVirgin's Adults Only Cruise Line: Everything We Know
Previous article
Carnival’s Perks on Cruises Not Offered by Other Cruise Lines
Next article
Norwegian Mega Ship Completes First Cruise to Alaska