Disney Cruise Line has announced the latest feature of the AquaMouse, a new water ride that will be on their next new cruise ship Disney Wish. 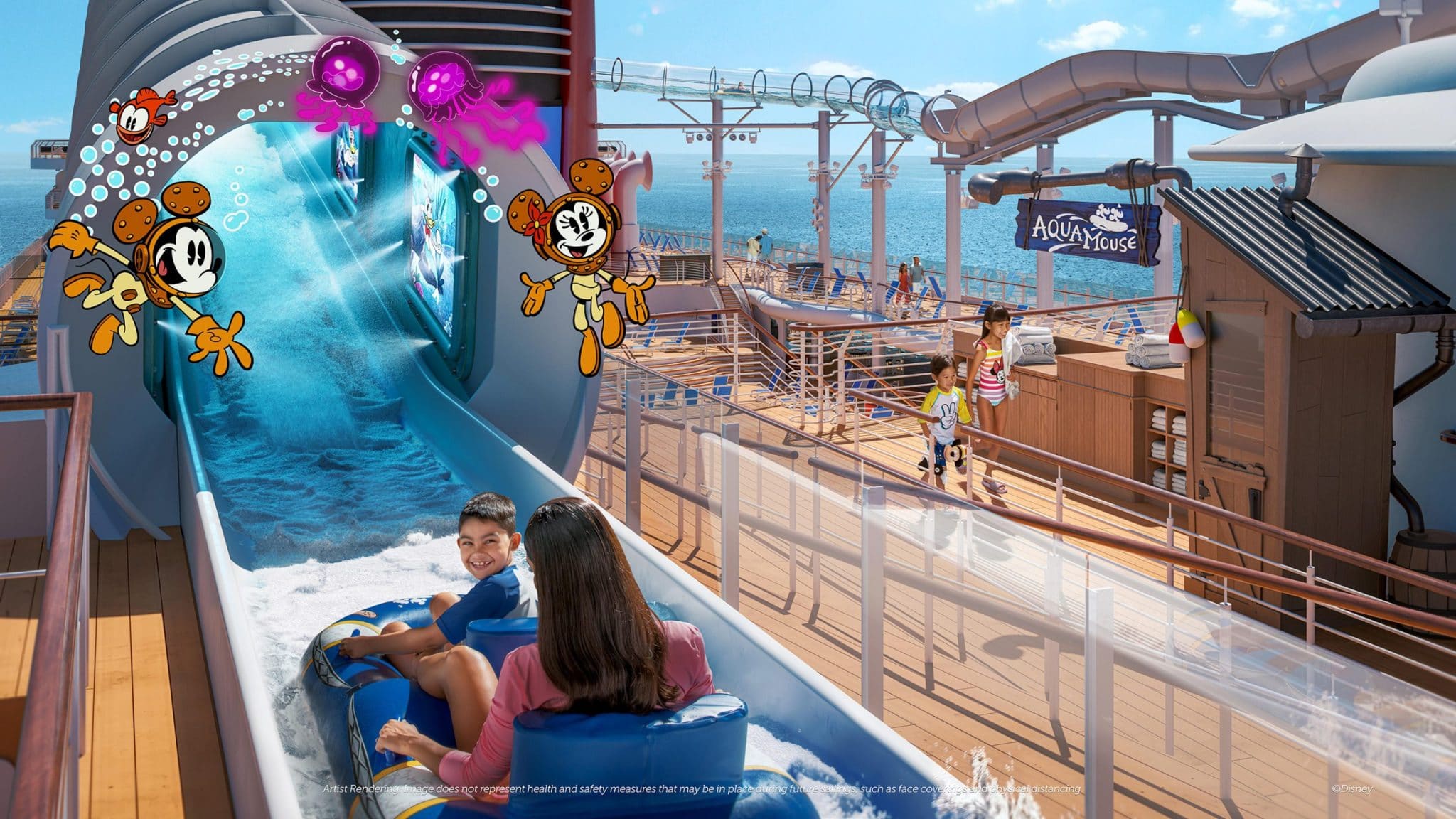 AquaMouse will have two shows as guests ride around the top deck of Disney Wish. The first show “Scuba Scramble” was inspired by “The Wonderful World of Mickey Mouse” animated shorts. The show will immerse guests in a hilarious underwater adventure with Mickey Mouse and Minnie Mouse through show scenes and special effects.

Our second show is “Swiss Meltdown,” where Mickey and Minnie will invite you on a mountain sledding excursion that will inevitably (and hilariously) go awry. When the sun comes out and the snow begins to melt, you’ll be off on a frantic dash to the mountaintop while trying to avoid obstacles like avalanches, leaky rock walls and waterfalls — oh, boy! The story is inspired by one of the Emmy Award-winning “Mickey Mouse” shorts, “Yodelberg,” and composer Christopher Willis adapted his iconic score from the episode for the attraction.

There are many fun Disney Easter eggs to catch during a ride on AquaMouse, such as an appearance by the abominable snowman from the Disneyland attraction Matterhorn Bobsleds. One of my favorite details is that Chip and Dale are hiding in each show, hitchhiking their way to Disney’s private island of Castaway Cay.

Disney Wish will be Disney Cruise Line’s fifth cruise ship and will debut in June 2022. The cruise ship will homeport in Port Canaveral and sail three and four night cruises to the Bahamas.

Ben Souza
Ben is a world traveler who has visited 42 countries and taken over 50 cruises. His writings have appeared and been cited in various media outlets such as Yahoo News, MSN, NPR, Drudge Report, CNN, Fox, and ABC News. Ben currently resides in Cincinnati, Ohio. Follow Ben on Instagram. Visit Ben Souza on Linkedin. You may email Ben at [email protected]
Cruise NewsDisney Cruise LineDisney Cruise Line Is Bringing Snow to Their New Water Ride AquaMouse
Previous article
The Largest Cruise Ship Ever Built Completes Sea Trials
Next article
Which Carnival Cruise Ships Have the Most Space Ratio Per Passenger?