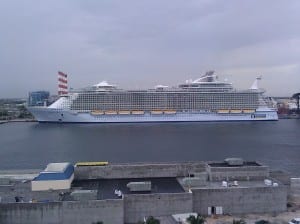 Royal Caribbean has announced that they have canceled the February 23, 2014 sailing for the Allure of the Seas.  The world’s largest cruise ship will go into drydock that week so repairs can be made to the propulsion system on the vessel.

Cruise Fever reported on November 4 that the Allure was having to cut several port stops short on its Eastern Caribbean itinerary because of propulsion problems to one of the ship’s Azipod units.  The ship was sailing at a reduced speed from its usual cruising speed of 22.4 knots.  RCCL said that “irregular wear” on the ship’s propulsion system will force the ship into drydock.

Instead of sailing a Western Caribbean sailing to the ports of Labadee, Haiti, Falmouth, Jamaica, and Cozumel, Mexico on February 23, the Allure of the Seas will drydock in the Grand Bahama Island shipyard.  This will be the first drydock for the 6,000 passenger cruise ship since she began sailing in 2010.

Adam Goldstein, the CEO of Royal Caribbean International, released the following statement: “We sincerely regret that we will be unable to deliver the Royal Caribbean cruise vacation that our guests were looking forward to. We understand that our guests’ vacation time is very precious and can assure you that we did not take this decision lightly. But it was very important to us that we bring Allure back up to speed so that she could continue to deliver the amazing cruise vacations our guests expect.”

Passengers who were booked on the February 23 sailing can choose between a full refund of their cruise fare or sail on select itineraries at the same rate.

Since many of these passengers already have time off of work and plane tickets purchased for that week, Norwegian Cruise Line sent out an email to travel agents to try and get some of the displaced passengers to sail with them.  Two of their newest cruise ships, including the Norwegian Getaway which will be on only its 3rd sailing to the Caribbean, will be departing from South Florida that week. Fares start at $749 on the Getaway and $549 on the Norwegian Epic for the last week in February.

Another choice that passengers will have to choose from is the Royal Princess, also sailing from Ft Lauderdale on February 23.  The 4,000 passenger Royal Princess is the newest cruise ship built by Princess and cruise fares start at only $599 for that week.

However, out of all three of these ships, only the Norwegian Epic will be sailing to the Western Caribbean.  The Getaway and the Royal Princess have Eastern Caribbean itineraries.

Cruise Fever will continue to follow this breaking news and will have all updates as information becomes available.

Ben Souza
Ben is a world traveler who has visited 40+ countries and taken over 70 cruises. His writings have appeared and been cited in various media outlets such as Yahoo News, MSN, NPR, Drudge Report, CNN, Fox, and ABC News. Ben currently resides in Cincinnati, Ohio. Follow Ben on Instagram. Visit Ben Souza on Linkedin. You may email Ben at [email protected]
Cruise NewsRoyal Caribbean Cancels the Allure of the Seas February 23th Sailing
Previous article
Best and Funniest Cruise Commercials
Next article
Royal Caribbean’s Anthem of the Seas Keel Laid