The Costa Fascinosa left the port of Venice on Monday evening and headed for the Greek Islands when the cruise ship encountered a water spout.  The incident was first reported by several Italian newspapers and Cruise Law News. 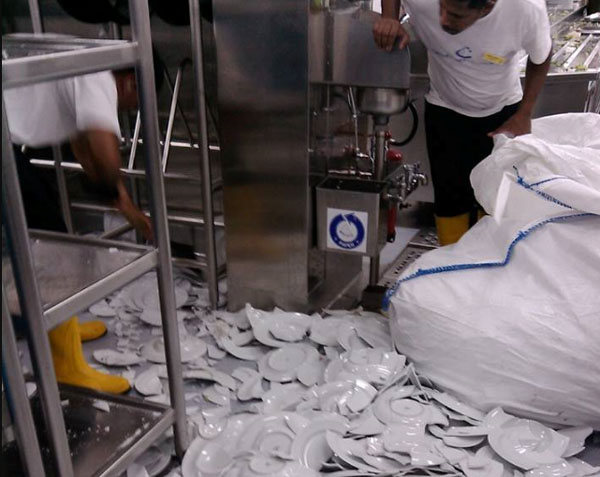 The Fascinosa faced winds exceeding 90 knots and when one of the engines failed with passengers onboard the cruise ship describing the incident as “it was like being on a spinning top”.  The captain gave the order for all passengers to put on life jackets and said that he had “lost control of the ship”.

The rough weather lasted for 2 hours and caused a huge mess in the galley and inside rooms. Dishes, glassware, and furnishing were “flown in the air” by the high winds.  There are reports of passengers crying and praying as the ship tried to weather the storm.  Below is a video taken from the galley that shows some of the damage that was done. (Video Credit: Jimmy Hernandez)

“We are very sorry for what happened and any inconvenience this caused. We confirm that the evening of 22 September, the Costa Fascinosa met with winds over 90 knots that have influenced the course and met with the inclination of the hull .  The commander of the ship immediately activated the procedures necessary to re-establish a regular and normal navigation, and then proceeded to warn and assist passengers. Costa has taken the route planned in the program.”

There have been no reported injuries due to the storm.  Costa Crociere is an Italian owned cruise line that operates 14 cruise ships.  The Costa Fascinosa is a Concordia class ship and has been in operation since 2012.  The ship can hold 3,780 passengers and is 114,500 gross tons.