Cruise Ship Uprighted: Next Step for the Costa Concordia 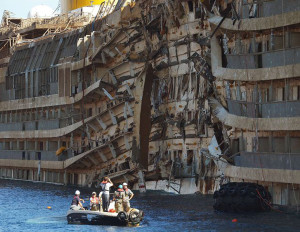 The Costa Concordia cruise ship is sitting upright for the first time since hitting a reef off the coast of Italy 19 months ago.  The parbuckling process took 19 hours, almost double the time that engineers who designed the plan originally estimated it would take.

Viewers from around the world tuned in as Fox, CNN, Reuters, and many other news outlets provided an online broadcast of the procedure that had never been attempted to a ship this size.  The cruise ship was successfully raised 65 degrees showing severe damage to the side of the vessel that was crushed against the rocks under the weight of the ship.

The Concordia is currently resting on a false bottom 90 feet below the surface of the water, only 7 decks of the ship (including the bridge) are currently above water.  The next step is for workers to install caissons to the starboard side of the Concordia.  These caissons will be used during the re-floating stage.

During this stage, workers will also attempt to find the last 2 bodies (one female passenger and one male crew member) that have yet to be recovered from the wreckage.

There were concerns that toxic water from inside the ship would be knocked out from the ship and carried into the wind as storms moved in this week.  There is an estimated 20,000 tons of dirty water that is full of rotting food, cleaning chemicals, and paint thinners inside the cruise ship.  However, water and air quality tests proved that there was no contamination from the vessel.

After the caissons have been installed, a pneumatic system will be used to slowly empty the water from the caissons on both sides of the ship.  The Concordia will then float to a point where only 50 feet of the ship will remain below water.  Once the ship is floating and secure, it will be towed to a salvage yard where the ship will be scrapped.

This entire process is expected to be completed in the summer of 2014.  Titan Salvage, the company that is in charge of the removal process, says that it would be misleading and unrealistic to give an exact date for the conclusion of the work.  The Concordia will be secured and will ride out the winter months in its current location.

Personal items that are able to be recovered from the ship will also be returned to their rightful owners.  Once the ship has been towed to the salvage yard, work will begin on restoring the reef and the areas that have been impacted by this tragedy.

Cruise Fever will continue to monitor the removal efforts of the Costa Concordia and will have all news and updates as information comes in.

Ben Souza
Ben is a world traveler who has visited 40+ countries and taken over 70 cruises. His writings have appeared and been cited in various media outlets such as Yahoo News, MSN, NPR, Drudge Report, CNN, Fox, and ABC News. Ben currently resides in Cincinnati, Ohio. Follow Ben on Instagram. Visit Ben Souza on Linkedin. You may email Ben at [email protected]
Cruise NewsCruise Ship Uprighted: Next Step for the Costa Concordia
Previous article
LIVE: Costa Concordia Being Pulled Upright (Video)
Next article
Royal Princess Suffers Power Outage in the Mediterranean