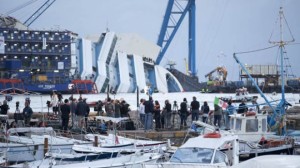 The Costa Concordia cruise ship is finally being pulled upright out of the waters off the coast of Italy.  The ship has been half submerged in water since the vessel hit a reef killing 32 passengers and crew members.

Reuters Video: the Costa Concordia is risen out of the sea off the coast of Giglio Island, Italy

The work began about 9 a.m. on Monday, September 16, 2013.  This was delayed 3 hours due to weather conditions in the area.  Work is going slow but progressing as the workers attempt something that has never been done before to such a huge ship.

Portions of the ship that have been submerged in water can now be seen above the water line.  This process called “Parbuckling” will attempt to raise the ship from 65 degrees to 100% vertical so it can be towed to a salvage yard.  Engineers are using a complex system of remote controls, pulleys, counterweights, and huge chains.

Another famous vessel that was parbuckled was the USS Oklahoma in 1943.  The U.S. military used this same method to upright the ship after the Japanese attack on Pearl Harbor.  However, the USS Oklahoma was only 28,000 tons in size, far smaller than the Concordia which is 110,000 gross tons.

The parkbuckling is expected to take 10-12 hours.  The possibility that the ship will break apart from this process has been ruled by engineers.

After the Concordia is stable and floating, workers will attempt to find the 2 missing bodies that have yet to be recovered.

The total cost of this operation is expected to reach $800 million.  However, much of that cost will be passed onto insurance companies.  Costa Cruise Line is owned and operated by Carnival Corp.