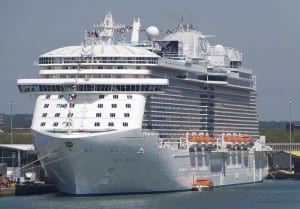 Update: Princess has canceled the remainder of the current sailing.  Passengers will disembark in Naples on Wednesday and Princess will make arrangements for them to be flown home.  They will also receive a 100% refund of their cruise fare and a 25% credit towards a future cruise. No other sailings are expected to be impacted by this problem.  Repairs to the ship will take place in Barcelona, Spain.

Princess Cruises newest cruise ship, the Royal Princess, suffered a power outage today while cruising in the Mediterranean.  Reports came in from Princess Cruises giving details about the situation.  The ship is currently sailing between Mykonos and Naples.

The power failure occurred at 1:30 pm local time and emergency generators kicked in to provide hotel services to the guests and passengers on board.  Toilets and other emergency services are fully functional.

Princess reported that the cruise ship is not in any danger and the captain is giving passengers and crew members updated information about the situation.  The ship is currently the 7th day of a 12 day Mediterranean cruise.  The ship embarked from Venice, Italy on September 15 with 3,600 passengers on board and 1,350 crew members.

Kyle Hearon, whose wife is currently on board the Royal Princess, told Cruise Fever that his wife was able to send him text messages from the ship telling him that they have lights and some power, but were not moving.  Power went off from 2:00 pm until 6:30 pm and tomorrow’s tours have been cancelled.  She responded 2 hours later that the ship had lost power again and she is sitting in a dark cabin.  He stressed that she was not worried or stressed about the situation.

Power is in the process of being restored.  There has not yet been any word on what caused the Royal Princess to lose power.

The Royal Princess is the newest and largest cruise ship from Princess Cruises.  The 142,000 gross ton ship was christened by Her Royal Highness The Duchess of Cambridge on June 13, 2013.

Cruise ships have had their share of problems in 2013.  First the Carnival Triumph made major news in February when the ship had a fire break out in the aft engine room leaving the ship without power in the gulf of Mexico.  In May, Royal Caribbean’s Grandeur of the Seas also had a fire break out on board causing damage to the aft of the vessel.  Just last month in August, Celebrity had to cancel the Alaskan cruise season for the Celebrity Millennium after the ship developed propulsion problems.

Cruise Fever will continue to monitor the situation and will provide all updates as more information becomes available.

Ben Souza
Ben is a world traveler who has visited 42 countries and taken over 50 cruises. His writings have appeared and been cited in various media outlets such as Yahoo News, MSN, NPR, Drudge Report, CNN, Fox, and ABC News. Ben currently resides in Cincinnati, Ohio. Follow Ben on Instagram. Visit Ben Souza on Linkedin. You may email Ben at [email protected]
Cruise NewsRoyal Princess Suffers Power Outage in the Mediterranean
Previous article
Cruise Ship Uprighted: Next Step for the Costa Concordia
Next article
Carnival (CCL) Stock Takes Hit On Earnings