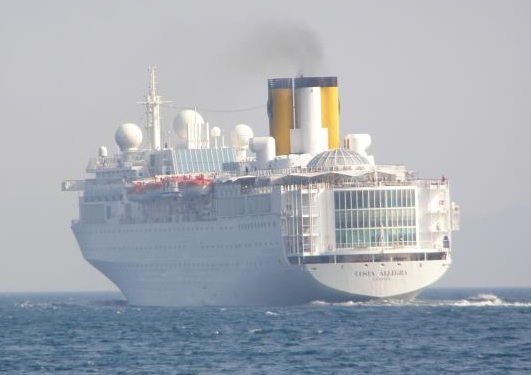 As most of you know by now, the Costa Allegra had a generator fire a few weeks ago while 200 miles off of the coast of Africa. The fire was not out of control and was eventually extinguished by the built in suppression system. None of the crew or passengers were injured, but the fire caused enough damage to leave the Allegra without power. Calling for help, the Costa Allegra was towed to the island of Mahe by a French tuna-fishing vessel the Trevignon.

The 636 passengers and over 400 crew members were stranded on the island while other arrangements were made. Costa Cruises had been having a difficult year, with another of their ships the Costa Concordia being holed by rocks forcing it to be grounded only six weeks before the Allegra incident. In the case of the Concordia, there were 32 deaths.

On March 9, the company announced that the Allegra would not return to full service with Costa.

The MS Costa Allegra was a cruise ship owned by Italy-based Costa, under the domain of the Carnival Corporation.  Built in 1969, this ship was owned by several companies before being acquired by the company Costa Cruises in 1990.

The Allegra is usually scheduled for eleven cruises a year, four spring and seven fall cruises. A large ship, the luxurious Allegra featured a two French chefs, a French cruise director, maitres ‘d, receptionists, and many other staff dedicated to making the trips an upscale experience for their passengers.

So here is the question, how much will these last 2 cruise ship disasters affect the company?  Will future cruisers feel comfortable with this cruise line that has seen its share of bad PR in a very short period of time?

Given the incident with both of their ships, an investigation in Genoa has begun where Costa Cruises has its headquarters. Appointed Chief prosecutor named Michele Di Lecce and his team of investigators are looking into the fire to determine if there was negligence on the part of the cruise line or anyone else connected with the company. While the investigation has not released any information about who is to blame, the future of the company looks grim.

Costa Cruises is also temporarily suspending Red Sea cruises on their ship the Costa Voyager. The company offered a full refund to the passengers who had purchased cruise tickets as well as a 30% discount on any future cruise with their company.

While the future of Costa Cruises is yet to be determined, news about the incident has made many of their customers think hard about booking with the company again. Many repeat customers have expressed a desire to avoid Costa and take their vacations on other lines that have not had the same problems. In addition to their customer base leaving them, Costa Cruises is being criticized for having staff that were not prepared to deal with the fire. Many of the passengers said that the staff on the cruise had no idea what procedures to follow in case of emergencies and were not helpful during the incident. This criticism, if true, could have legal ramifications for Costa.

At this time, Costa Cruises is facing an uncertain future. With these two incidents happening in just a few weeks of each other, their customers may not be coming back to the company. Some experts believe that Costa will not survive their problems and this prediction could be likely.

So what do you think?  We would love to hear your comments on this topic and if you have cruised with Costa before.

Of course these events very rarely happen, but when they happen so close together with the same company involved it does make you stop and think.

J. Souza
Jon got hooked on cruising after his first cruise on his honeymoon, and today he is always looking for cruise deals and reading information about the cruise industry. Jon lives in the foothills of North Carolina and wishes there were a cruise port that far inland. Jon can be reached at [email protected]
Cruise NewsUpdate on Costa Allegra Fire and Aftermath for Costa Cruise Lines
Previous article
Carnival Cruise Ship to Undergo Major Overhaul
Next article
Cruise Questions: Pregnancy, Alcohol, Fuel Surcharge & More