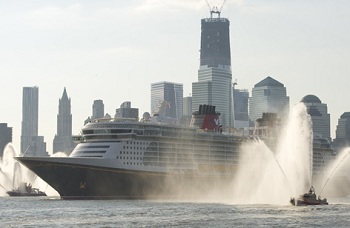 Tuesday this week, the all new Disney Ship, The Fantasy, finally finished its 3,800 mile maiden voyage from Germany and pulled into port in New York yesterday.

The Fantasy is the sister ship of the Disney Dream which debuted a year ago, and it will eventually be sailing out of Port Canaveral, doing 7 night voyages to the Caribbean.  But today it will be christened in New York before it makes its final journey south to the Florida port.

The Fantasy can hold 4,000 passengers and has one of the most state-of-the-art aqua parks on any cruise ship that is sure to keep both kids and adults happy.

This giant ship is sure to turn some heads today as it sits in port in the New York, and Disney is making this a big celebration.  Disney’s CEO and chairman will be at the gala ceremony, and the company promises some special guests as well.

Believe it or not, this is the first time a Disney cruise ship has been to New York City, so it’s a pretty special occasion for both the company and for Disney fans residing in the Big Apple.  But this will not be the last time Disney sails to New York.  This summer Disney will be providing cruises from Manhattan with their ship Disney Magic.  But since it get so cold in New York in the winter time, these sailing will only be available in the summer.

In the golden age of cruising, ships would often come to New York on their maiden voyage, and Disney has tried to pick up that tradition again.

You will be able to start cruising on the Disney Fantasy starting on March 31st of this year, when it starts sailing to the Caribbean.

J. Souza
Jon got hooked on cruising after his first cruise on his honeymoon, and today he is always looking for cruise deals and reading information about the cruise industry. Jon lives in the foothills of North Carolina and wishes there were a cruise port that far inland. Jon can be reached at [email protected]
Cruise NewsNew Disney Ship The Fantasy to Be Christened Today in New York
Previous article
Costa Allegra Update, Passengers Back in Port
Next article
Carnival Cruise Ship to Undergo Major Overhaul