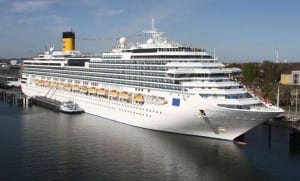 Over 50 crew members on the Costa Pacifica cruise ship were sent to seek additional medical attention after being infected with the measles.  The ship was in the port of Civitavecchia, Italy when the infected crew members disembarked from the vessel.

Although 59 crew members have “probably been infected” with the virus according to Il Messaggero, there have not been any reports of the virus being spread to any of the passengers on the ship.

The crew members were put into isolation in accordance with hygiene and health requirements before being sent to numerous hospitals.  Nine crew members are currently hospitalized in Rome and others have been sent to hospitals in Orbetello.

The captain of the Costa Pacifica is keeping passengers informed of the situation and the cruise is going on as scheduled.  Additional crew members have been added to the cruise ship to help fill the holes of those who got infected.

The Pacifica is currently on a 9 night cruise that left out of the port in Savona, Italy on February 22, 2014.  The cruise has stops in the ports of Marseille, France; Palma De Mallorca, Spain; Civitavecchia, Italy; and La Spezia, Italy.  The ship will arrive back in Savona on March 1, 2014.

Cruise Fever will continue to monitor the measles outbreak on the Costa Pacifica and will update this page if and when more information becomes available.