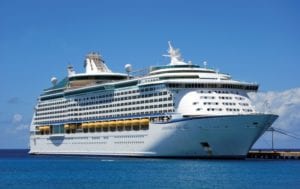 Royal Caribbean Cruise Line has released the names of what they will call their next two cruise ships.  The two Sunshine Class ships will be called the Quantum of the Seas and Anthem of the Seas.

Construction has begun on the Quantum of the Seas and is scheduled to be completed in the Fall of 2014.  The Anthem of the Seas will follow in the Spring of 2015.  Although these ships will be smaller than the Oasis Class, they will be among the largest cruise ships at sea at an estimated 158,000 gross tons.  The ships will accommodate up to 4,100 passengers.  The German shipbuilder Meyer Werft has been contracted to build both cruise ships.

Royal Caribbean has said that they will be releasing details in the next few months on what the Sunshine Class cruise ships will offer passengers.  The ships will be “Designed for WOW”, Royal Caribbean’s new phrase to help describe their ships.  RCCL has not released the itineraries for these new ships or when guests will be able to make reservations.

The Quantum and Anthem of the Seas are in addition to the 3rd Oasis Class ship that Royal Caribbean ordered in late December, 2012.  The Sunshine contract has an option to build a 3rd ship, but there has not been any word on when that decision will be made.

The name Anthem was picked because it is defined as a song of praise and represents the qualities and features of Royal Caribbean.  The name Quantum was picked because it best represented the tone fit that RCCL was seeking in this new class of cruise ships.  They are seeking to go above and beyond, taking a quantum leap forward.

Voting was done by paper ballot by the Project Sunshine Steering Committee and the votes were virtually unanimous.

What are some features that you are looking for in these Sunshine Class class ships?  Cruise Fever would love to know what you think by leaving your thoughts and opinions in the comments section below.