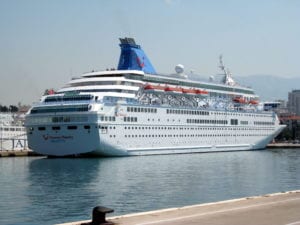 A lifeboat accident in the Canary Islands has left five crew members dead and three others injured on the Thomson Majesty cruise ship.   Thomson Cruises, a British cruise line, was conducting a training drill exercise at the time of the accident.

Reports coming in from Spain state that a lifeboat fell 20-30 meters into the water before overturning.  Officials have yet to determine what made the lifeboat with crew members in it to suddenly fall.   Accidents when testing lifeboats is not uncommon and the seafarers’ union advises members that they should not sit in the lifeboats when drills are conducted.

The reason that they advise these drills to take place with empty lifeboats is because recent research has suggested that more crew members/passengers die in lifeboats than are being saved in them.  While a bit dated, a 2001 investigation by the Marine Accident Investigation Branch in Britian showed that 15% of all deaths from professional seafarers involved lifeboat drills.

Thomson Cruises issued the following statement, “We are working closely with the ship owners and managers, Louis Cruises, to determine exactly what has happened and provide assistance to those affected by the incident”.

Among the dead are three Indonesians, a Filipino and a Ghanaian.  Two of those who were seriously injured were Greek nationals while a third Filipino was slightly injured.  The injuries that these three suffered are not considered life threatening.  There were no passengers in the  lifeboat when it fell.

The Thomson Majesty is a 20 year old ship that can carry up to 2,000 passengers.  The ship is currently stationed in the Canary Islands and sails 7 night cruises that stop in the ports of La Gomera, Fuerteventura, and Tenerife.  The ship was owned by Norwegian Cruise Line until 2004 when Norwegian sold the ship to Star Cruises.  Louis Cruises bought the ship from Star in 2009 and has been operated/chartered by Thomson Cruises ever since.

Cruise Fever will continue to monitor the situation in Spain and update this page with more information as it becomes available.  Our thoughts and prayers go out to the family and friends of these five that perished today in this accident.