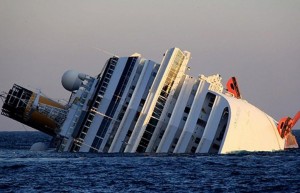 On January 13, 2013 at approximately 9:45 pm will mark one year since the Costa Concordia cruise ship hit a reef off the coast of Italy killing 32 passengers and crew members.  While work continues 24/7 on removing the massive ship from the water, there are lawsuits and the trial of the captain, Francesco Schettino.  Schettino is facing multiple manslaughter charges, causing a shipwreck, and abandoning ship.

There will be one minute moment of silence at 9:45 pm on the island of Giglio that will be followed by the sounds of ship’s sirens marking the time that the Concordia hit the reef.  The memorial is expected to be attended by several hundred people.

Earlier that day, there will be a special mass at the Church of Saints Lorenzo and Massimiliano.  The church is in sight of the wreckage that is still half submerged in the water.  Titan Salvage, a US based salvage company, and the Italian firm Microperi won the bid to remove the cruise ship.

A special website has been created that not only monitors the cleanup process of the Concordia, but also explains the stages that are necessary to safely remove the vessel from the water.  There are 5 stages in the removal progress  holdbank system and stabilization, underwater support and portside sponsons, the Parbuckling, starboard sponsons, and refloating.   Visit www.theparbucklingproject.com for more information.

Immediately after this accident, cruise bookings took a brief nosedive as images of a half submerged 4,000 passenger cruise ship were plastered all over the television networks and internet.  This fear of cruising quickly faded as the industry began to move past this and to make sure that it would never happen again.

This incident also prompted CLIA and all the major cruise lines to adopt changes in the way that muster drills were performed.  Muster drills must now be completed before the ship leaves port on embarkation day.  There were also some reports of passengers who were kicked off their cruise for purposely skipping the muster drill.  It was a wake up call on how serious safety needs to be handled on the seas.

Even though there were some critics that questioned, “Are the new mega cruise ships too big?’, cruise lines have announced orders for many more of the mega ships that can hold 3,500 or more passengers.

It is important for cruise lines, ship’s officers, and crew members to remember what happened to the Costa Concordia. Safety of the passengers and crew members must remain as the highest priority on board.  It is also important for the cruise industry to look forward as cruising continues to grow in popularity.

The best years are ahead for cruise lines and for passengers who enjoy cruising. However, we should all join in from around the world for a moment of silence on January 13 to remember the 32 lives that were lost one year ago.

Ben Souza
Ben is a world traveler who has visited 42 countries and taken over 50 cruises. His writings have appeared and been cited in various media outlets such as Yahoo News, MSN, NPR, Drudge Report, CNN, Fox, and ABC News. Ben currently resides in Cincinnati, Ohio. Follow Ben on Instagram. Visit Ben Souza on Linkedin. You may email Ben at [email protected]
Cruise NewsCosta Concordia: One Year Later
Previous article
What are the World’s Largest Cruise Ships?
Next article
Norwegian Cruise Line Goes Public, Listed on the NASDAQ