What are the World’s Largest Cruise Ships? 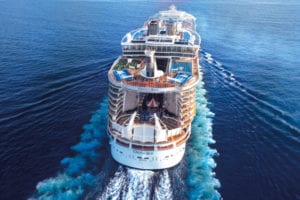 Two popular cruise questions that we are often asked is, “What is the world’s largest cruise ship?” and “Are cruise ships bigger than the Titanic “.  To answer the second question first, yes, nearly all cruise ships are larger than the Titanic.  In fact, most are at least twice the size and some are 5 times larger.  If the Titanic was around in 2013, it would be a very small ship compared to what Royal Caribbean, Carnival, Norwegian, Disney, Princess, and the ships from all the other lines have in their fleets.

Out of the ten largest cruise ships in the world, seven of them belong to Royal Caribbean.  As a matter of fact, Royal Caribbean currently has ten out of the largest fifteen in the world.  However, that will soon change as Norwegian and Princess have ordered several ships (6 total) that will be among the fifteen largest.

The largest cruise ship in the world is Royal Caribbean’s Allure of the Seas which is 1,187.05 feet long and is 225,282 gross tons.  The Allure is three inches longer that her sister ship, the Oasis of the Seas.  Both of these cruise ships are the only ships that can carry over 6,000 passengers.

The third largest cruise ship is the Norwegian Epic which is 100 feet shorter than the Allure and Oasis and comes in at 155,873 gross tons.  The Epic is the only other cruise ship that can carry up to 5,000 passengers.  The size of a cruise ship is not measured in length or the height of the beam, but rather on the gross tonnage of the vessel.

Royal Caribbean’s Freedom Class (Freedom, Liberty, Independence of the Seas) come in fourth through sixth place on the list.  While the ships are 30 feet longer than the Epic, they are 1,400 gross tons less.

Cunard’s RMS Queen Mary 2 is the seventh largest cruise ship in the world, but it is the 3rd longest behind the Allure and Oasis of the Seas at 1,130 feet in length.

MSC Divina, which was launched in 2012, comes in at eighth place.  The Divina has max capacity of 3,900 passengers.

Royal Caribbean rounds out the top ten with two Voyager Class ships, the Navigator and Mariner of the Seas.

While Carnival Cruise Line has the most ships of any cruise line in their fleet, they do not have any of the fifteen largest cruise ships.  Their largest ships, the Carnival Dream, Magic, and Breeze, are currently 16-18th in size.

This list of largest cruise ships will continue to change as cruise lines have ordered several more mega ships.  Royal Caribbean has ordered another Oasis Class ship that will be the same size as the Oasis and Allure.  The Oasis Class ship is in addition to the two Project Sunshine  ships.

Norwegian has four ships ordered that will be among the top fifteen, including two Breakaway Plus ships that will be second in size to the Oasis Class when they are launched in 2015 and 2017.

Ben Souza
Ben is a world traveler who has visited 40+ countries and taken over 70 cruises. His writings have appeared and been cited in various media outlets such as Yahoo News, MSN, NPR, Drudge Report, CNN, Fox, and ABC News. Ben currently resides in Cincinnati, Ohio. Follow Ben on Instagram. Visit Ben Souza on Linkedin. You may email Ben at [email protected]
Cruise FactsWhat are the World's Largest Cruise Ships?
Previous article
A Guide to Christian Cruises
Next article
Costa Concordia: One Year Later