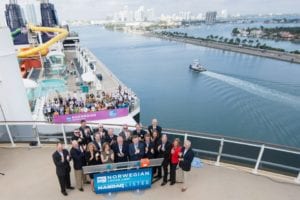 Shares of Norwegian Cruise Line closed up over 30% from the IPO price of $19 a share in the first day of trading to close at $24.79 a share.  Norwegian raised $447 million by selling a 12% stake in the cruise company totaling 23.5 million shares.  Norwegian said that they went public to raise money to help pay down part of the $3 billion that the company is in debt.

Norwegian Cruise Line currently has 11 cruise ships sailing throughout the world and has four more of the newer mega cruise ships ordered.  CEO Kevin Sheehan said in a phone interview, “Every time you bring out one of these beautiful new ships, it gets new people to take notice”.

Norwegian hopes to take advantage of the demand for cruising that weathered the recent financial downturn.  All of the major cruise lines have plans to add cruise capacity by adding many new cruise ships in the next few years.    The Norwegian Breakaway and Getaway are already under construction with the Breakaway scheduled to begin sailing 7 night cruises out of New York to Bermuda in May 2013.

The IPO price put Norwegian near the same area where Carnival Corp. has been trading, roughly 12 times earnings.

Norwegian has not said whether or not they will offer shareholders room credit on cruises like Royal Caribbean and Carnival offer.  They currently offer up to $250 in stateroom credit on each cruise for owning at least 100 shares in each company.