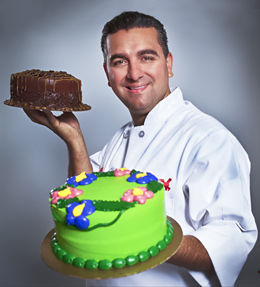 The Norwegian Breakaway is about to sweeten the deal with what is expected to be a world-class bakery.  The TLC television star of “Cake Boss” will be opening an extension of his family-business bakery aboard this brand new cruise ship that is expected to launch in May of 2013.

Buddy Valastro is the master baker of Carlo’s Bake Shop in New York City and star of the hit show, “Cake Boss”.  The shop is world-renown for its elaborate fondant cakes, cannolis, chocolate truffles, and other baked goodies.

“Buddy is known as the ultimate baker, so we knew he was the best choice for our new bakery on Norwegian Breakaway,” Norwegian CEO Kevin Sheehan says in a statement accompanying the announcement.

The 4,000 passenger Breakaway is the largest cruise ship ever to make New York City its home.  And with several amenities designed to attract New Yorkers and make them feel at home, this new addition of an iconic New York bakery is sure to get some attention.

The bakery will be on deck 8 of the Breakaway and will offer baked goods such as cakes and pies, dark chocolate mousse, freshly bakes cookies, cupcakes, cheesecakes, tiramisu and other confections.  But one of the biggest draws should be the opportunity to pre-order custom cakes for celebrations such as birthdays and anniversaries.

For the cruisers wanting to learn some baking tips from the pros, the bakery will also offer cupcake decorating classes while aboard the Breakaway.

J. Souza
Jon got hooked on cruising after his first cruise on his honeymoon, and today he is always looking for cruise deals and reading information about the cruise industry. Jon lives in the foothills of North Carolina and wishes there were a cruise port that far inland. Jon can be reached at [email protected]cruisefever.net.
Cruise NewsNorwegian Cruise Line Hires ‘Cake Boss’ for Cruise Ship Bakery
Previous article
Norwegian Cruise Line Goes Public, Listed on the NASDAQ
Next article
Top 10 Most Visited Cruise Ports From the US