A Guide to Christian Cruises

Christian cruises have really taken off in popularity the past few years. A Christian cruise is where an agency rents out the entire ship for a cruise, offers Christian entertainment while the casino is closed and no alcohol is served. This creates a nice Christian atmosphere that has lead to their popularity.  These cruises often cost 2-3 times the normal price of the cruise.  If you are interested in going on one, don’t wait until the last minute, many are sold out months in advance.

It is worth noting that some of these cruises do not charter the entire ship, so alcohol is served and the casino is open.  If you are able to book the same cruise directly through the cruiseline, then the ship is not chartered.

There are several different cruises that bring in national singing groups and popular Christian pastors and speakers to speak during the cruise. The cruises are generally the 4 day trip to the Bahamas and take place in the winter, because who doesn’t want to get away from the cold and head to the Bahamas in February?  However, there are Christian cruises through the year that visit ports in Mexico, Alaska, and throughout the Caribbean that are a week long.

2014: The 2014 KLove cruise will be the first 5 night cruise in the 11 year history of the Friends & Family Music Cruise.  The cruise will take place on the Carnival Victory out of Miami, Fl and will stop in Ocho Rios, Jamaica and Grand Cayman Island.   Payment plans are available and KLove have yet to announce the artists or entertainers that will be on this cruise.  Friends & Family Cruise 2014

Bill Gaither and friends will be having a 7 night Carribean cruise from February 22 through March 1, 2014 . Artists that will be on this cruise are the Gaither Vocal Band,  the Nelons, Russ Taff, the Isaacs, Martins and several other groups.  The cruise will take place on Holland America’s ms Westerdam sailing out of Ft Lauderdale, Florida and will stop in the ports of Half Moon Cay, Bahamas, Grand Cayman Island, Cozumel, Mexico, and Key West, Florida.  Gaither Caribbean Cruise

Turning Point Ministries will be having a week long Alaskan cruise from July 20-27, 2013 on Holland America’s ms Westerdam.  The cruise will leave out of Seattle, WA and stop in the ports of Juneau, Glacier Bay, Sitka, Ketchikan, and Victoria, BC.   Joining David Jeremiah will be Marshall Hall, Ian Oakley, Dennis Swanber, and Jan & Dan.   David Jeremiah Cruise 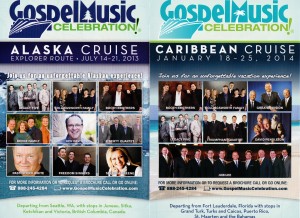 If you’re looking for plenty of Southern Gospel music mixed with all the fine amenities of luxurious cruising, Gospel Music Celebration offers 2 cruises to 2 different parts of the world.  The Alaskan cruise takes place July 14-21, 2013 and leaves out of Seattle, WA.  The Caribbean cruise is from January 18-25, 2014 and departs from Fort Lauderdale, Florida.  Southern Gospel singing groups Legacy 5, Greater Vision, Booth Brothers, Triumphant Quartet, Collingsworth Family and more will be there to sing and entertain you as you cruise.  These cruises are on Holland American ships.  Check out the flyer here and for more information, check out gospelmusiccelebration.com.

Cruise Fever will continue to update this page as future Christian cruises are announced.

Ben Souza
Ben is a world traveler who has visited 40+ countries and taken over 70 cruises. His writings have appeared and been cited in various media outlets such as Yahoo News, MSN, NPR, Drudge Report, CNN, Fox, and ABC News. Ben currently resides in Cincinnati, Ohio. Follow Ben on Instagram. Visit Ben Souza on Linkedin. You may email Ben at [email protected]
Specialty CruisesA Guide to Christian Cruises
Previous article
2012 Cruise Year in Review
Next article
What are the World’s Largest Cruise Ships?