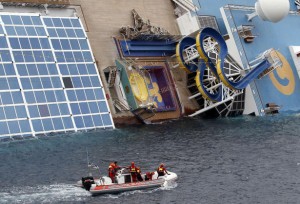 It was quite a year for cruise lines in 2012.  Several cruise ships hit reefs, a few had fires break out, and the norovirus sickness plagued several ships.  Not all the news was bad, most of the cruise lines announced they will be building more of the mega cruise ships in the next few years after the unbelievable success of those that had been built the last few years.

The top cruise news story of 2012 was the Costa Concordia accident when the ship hit a reef off the coast of Italy and killed 32 passengers and crew members.  This disaster shook up the cruise industry causing many to cancel cruises due to fear of taking a cruise.  New safety drills were put into place by CLIA (Cruise Lines International Association) to ensure the safety of everyone on board.

The Azamara Quest and the Costa Allegra had fires break out on the ships which caused both ships to lose much of the power on board. Passengers reported rough conditions on board until they were able to be rescued.  They seemed to make the most out of a bad situation when passengers on the Quest were reported to have been partying and having a good time even though there was overflowing plumbing, no air conditioning, and warm food.  Fire on board a vessel is the biggest concern for crew members.

Other ships to run into problems were the MSC Poesia that hit a reef off the coast of the Bahamas (little to no injuries to passengers or the ship) and the Silver Shadow that hit a cargo ship in Vietnam.  The Caribbean Princess had to cancel two cruises and cut one cruise short after having propulsion problems in San Juan, Puerto Rico.

There was also sad news when cruise passengers were taking excursions in Mexico.  In February, 22 passengers from the Carnival Splendor were robbed at gunpoint while on a cruise excursion in Puerto Vallarta, Mexico.  In November, a Florida couple were killed while on an excursion in Cozumel, Mexico after their sand buggy lost control and hit a metal bar.

Even though 2012 was a rough, and at times sad year for cruise lines, the future of cruising continues to look bright as they continue to update and add new cruise ships.

There were four new cruise ships that began sailing under the major cruise lines in 2012.  The 3,690 passenger Carnival Breeze was the largest of the four.  Disney continued to add to their small but family favorite fleet when the Disney Fantasy was launched in March.  The Costa Fascinosa and the MSC Divina were the other two that were christened.

Norwegian Cruise Line is currently building their two largest ships in a new class of ship called the Breakaway Class.  The Norwegian Breakaway and the Norwegian Getaway will begin to sail in 2013 and 2014.  Norwegian also announced plans to build a “Breakaway Plus” ship, with little details other than it will be a similar size (4,000 passengers) as the Breakaway ships.  The deal also includes an option to built a 2nd Breakaway Plus ship if they choose.  It is worth noting that Norwegian was originally planning on building two Epic Class ships until the economy took a turn south in 2008.

Although not a cruise ship, the USS Constitution took a short 17 minute cruise in Boston harbor in August.  It was the first time in 15 years that the 215 year old ship set sail.

Rounding out the cruise news for the year, Carnival created a policy to stop deck chair hogs, cruise lines were hit with a few ridiculous lawsuits, Royal Caribbean began offering Freestyle Coca-Cola machines, and a few cruise lines are experimenting with “all you can drink” packages.

The cruise industry’s future looks bright after an up-and-down year in 2012.  Cruise Fever is confident that with the new safety features put in place by cruise lines will help strengthen the industry that continues to grow in popularity.

Ben Souza
Ben is a world traveler who has visited 42 countries and taken over 50 cruises. His writings have appeared and been cited in various media outlets such as Yahoo News, MSN, NPR, Drudge Report, CNN, Fox, and ABC News. Ben currently resides in Cincinnati, Ohio. Follow Ben on Instagram. Visit Ben Souza on Linkedin. You may email Ben at [email protected]
Cruise News 2012 Cruise Year in Review
Previous articleMSC Announces the Longest Water Slide Ever Built on a Cruise Ship
Next articleA Guide to Christian Cruises