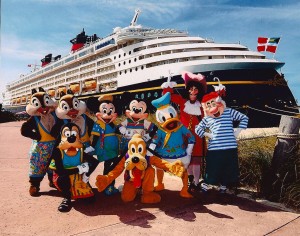 Disney Cruise Line was voted the Best Cruise Line for Families in 2013 in the Cruise Fever Fan Awards.  Voting was done by the readers of CruiseFever.net throughout 2013 and concluded on December 31, 2013.

From the entertainment offered on board Disney cruise ships to the popular Disney characters, it helps create the perfect amenities and activities geared towards families.  They are also the only cruise line that does not have a casino on board their ships.  DCL offers cruises on the Disney Wonder, Magic, Dream, and Fantasy.  Disney was also the first cruise line to offer a fireworks show at sea.

Royal Caribbean, which offers the Dreamworks Experience, was the runner up in voting.  Royal Caribbean was voted the Best Overall Cruise Line in 2013 in the Cruise Fever Fan Awards.   Carnival Cruise Line finished in 3rd and will begin to roll out Seuss At Sea in 2014.  Rounding out the top 5 were Norwegian Cruise Line (Nickelodeon) and MSC Cruises (kids sail free).

Cruise fans had to the option to vote in nine different categories offered by Cruise Fever.   Multiple votes from the same IP address were discarded.   The results below are the opinions of the readers of CruiseFever.net.

Complete results of the voting will be announced over the next week.

About Cruise Fever:  CruiseFever.net provides cruise news, tips, and reviews to help cruiser passengers make the most of their cruise vacations.  Founded in June of 2011, their website has received over one million page views in less than 2 and a half years.  They have an active Facebook page with over 10,000 fans.  Cruise Fever has 18,000 followers on Instagram, making them the 2nd largest cruise presence (Royal Caribbean is #1) on the popular social media site.