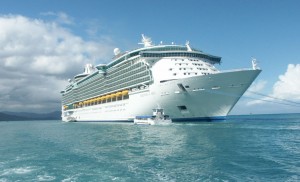 Royal Caribbean was voted the Best Cruise Line in 2013 in the Cruise Fever Fan Awards.  Voting took place on CruiseFever.net during 2013 and concluded on December 31, 2013.

Royal Caribbean continues to set the standard in the cruise industry for main line cruises.  Their “designed to WOW” cruise ships have a history of innovation that made their passengers “loyal to Royal”.  The largest cruise ships in the world, the Oasis and Allure of the Seas, continue to be wildly popular.  Their ships, service, food, and entertainment are the reason that Royal Caribbean was voted Cruise Fever’s Best Cruise Line in 2013.

Carnival Cruise Lines finished a distant but surprising 2nd place considering the amount of negative media that the cruise line received in 2013.  Carnival spent much of 2013 in damage control following the “poop cruise” and several mechanical problems with some of their cruise ships.  The fact that they were able to finish 2nd place in voting shows the loyalty of their cruisers and the strides that Carnival has made in clearing up the Carnival brand name.

Disney Cruise Line finished in 3rd place despite having only four cruise ships in their fleet.  Coming in 4th place was Norwegian Cruise Line, whose Freestyle Cruising has been extremely popular in getting first time cruisers to cruise with them.  Rounding out the top 5 was Princess Cruises.

Cruise Fever readers voted the Caribbean as their top cruise destination with nearly half of the vote.  The Mediterranean, Alaska, Europe, and Bermuda rounded out the top 5 in the Best Cruise Destination category.

The top dining choice in 2013?  Freestyle/Anytime dining was far and away the most popular following by early seating.  Late seating and the buffet were tied for 3rd with specialty restaurants finishing last.  This shows a trend in recent years as cruise passengers have begun to slowly shy away from traditional cruise dining.

Voting for the “Best Cruise Line for Families”, “Best New Cruise Ship for 2013”, “Best Cruise Blog”, “Best Private Island”, and “Best Home Based Travel Agency” will be announced in the coming days.

About Cruise Fever:  CruiseFever.net provides cruise news, tips, and reviews to help cruisers make the most of their cruise vacations.  Founded in 2011, their website has received over one million page views in less than 2 and a half years.  They have an active Facebook page with over 10,000 fans.  Cruise Fever has 18,000 followers on Instagram, making them the 2nd largest cruise presence (Royal Caribbean is #1) on the popular social media site.

Ben Souza
Ben is a world traveler who has visited 42 countries and taken over 50 cruises. His writings have appeared and been cited in various media outlets such as Yahoo News, MSN, NPR, Drudge Report, CNN, Fox, and ABC News. Ben currently resides in Cincinnati, Ohio. Follow Ben on Instagram. Visit Ben Souza on Linkedin. You may email Ben at [email protected]
Cruise NewsRoyal Caribbean Voted Best Cruise Line in 2013
Previous article
2013: Cruise Year In Review – The Good, The Bad, And The Ugly
Next article
Disney Cruise Line Voted Best Cruise Line for Families