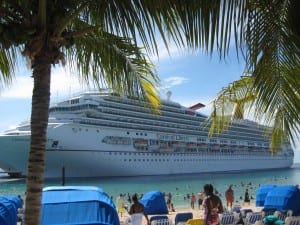 From cruise ship fires to Royal Caribbean announcing that they are building a ship larger than the Allure of the Seas, 2013 was an eventful year in cruising.  Let’s take a look over the past 12 months and review the good, the bad, and the ugly of the 2013 cruise season.

Although meteorologists predicted a busy hurricane season, it was one of the quietest seasons in the past few years.  This was good news for cruise passengers as only a handful of cruise ships had to make minor changes to their itineraries due to storms in the Atlantic and Caribbean.  Fewer storms also gave cruisers calm waters as they sailed to various islands.

Norwegian and Princess each had new 4,000 passenger cruise ships launched in 2013.  The award winning Norwegian Breakaway became the largest cruise ship to sail out of the Port of New York.   The Royal Princess was christened by the Dutchess of Cambridge on June 13, 2013.  Both of these cruise ships have had stellar reviews from cruisers.

Royal Caribbean cut the first piece of steel to their 3rd Oasis Class ship.  This yet to be named ship will become the largest cruise ship in the world eclipsing the Allure of the Seas by a mere 2,000 gross tons.

Viking River Cruises announced that they plan to launch an ocean cruise line to compliment their large fleet of river cruise ships.  The ships will be smaller (48,000 gross tons) than most modern cruise liners and will hold just under 1,000 passengers.  This luxury line of ships will be in a similar class as Azamara.

Several cruise lines , including Disney and Royal Caribbean, decided to ban smoking on cruise ship balconies.  We know that some of our readers will say that this belongs in the bad or ugly section of 2013.  We put it where we did because the majority of cruisers that we polled agreed with the cruise lines on the ban.

Royal Caribbean had its fair share of problems in 2013.  A fire broke out on the Grandeur of the Seas that caused noticeable damage to the aft of the ship.  Since the fire was not near the engines, it did not affect the generators on board and modern comforts such as indoor plumbing were available.  Six sailings were canceled so repairs could be made to the ship.

On November 4, Royal Caribbean admitted to having propulsion problems with the world’s largest cruise ship, the Allure of the Seas.  Many of the stops in port on Eastern Caribbean sailings were cut short to give the ship time to make it to the next port.  RCI canceled the February 23, 2014 sailing and repairs will be made to the azipod units at that time.

Cleanup continued on the Costa Concordia as the ship was successfully parbuckled in September.  The last human remains were also found and the ship will not be towed to a salvage yard until spring.

One of the newest cruise ships wasn’t immune to problems that can occur while at sea.  The Royal Princess had to cancel a sailing due to a power outage while cruising the Mediterranean.

The Alaskan cruise season for the Celebrity Millennium was cut short after being plagued with propulsion problems.

It is no secret the trouble that Carnival Cruise Line had in the first quarter of 2013.  It started on February 10 when the Carnival Triumph had a fire break out in an engine room causing the ship to lose power.  The media, including CNN and other cable news outlets, took the story and glorified everything bad that was happening on board.

Although it was far from luxury on board with little indoor plumbing, no air conditioning, and no hot meals, it was enough to damage Carnival’s reputation in the cruise industry.

Just one month later, the Carnival Dream and the Carnival Legend ran into problems one day apart.  Passengers on the Dream had to be flown back from St. Maarten so repairs could be made to the ship.  This string of incidents lead Carnival to a complete maintenance overhaul of their ships.

A cruise ship accident on the Thomson Majesty left five crew members dead during a training drill exercise on February 10.

Cruise Fever is looking forward to the 2014 cruise season believes that the best is yet to come for those who love to take cruise vacations.

Ben Souza
Ben is a world traveler who has visited 42 countries and taken over 50 cruises. His writings have appeared and been cited in various media outlets such as Yahoo News, MSN, NPR, Drudge Report, CNN, Fox, and ABC News. Ben currently resides in Cincinnati, Ohio. Follow Ben on Instagram. Visit Ben Souza on Linkedin. You may email Ben at B[email protected]
Cruise News 2013: Cruise Year In Review - The Good, The Bad, And The...
Previous articleTravel Improves Health According to New Study
Next articleRoyal Caribbean Voted Best Cruise Line in 2013