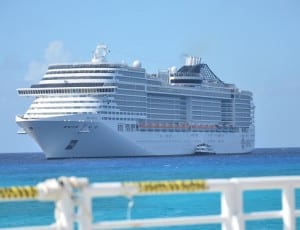 On a 3 day cruise out of Port Miami I had the chance the check out the MSC Divina.  I must say that it is one of the most elegant, beautiful, and luxurious ships on which you can cruise for the price.

MSC has recently been trying to break into the American market, after offering mostly European cruises for years.  I have seen how the cruise line has made some subtle changes that really impressed me on this recent cruise.  From improvements in entertainment and food quality, it’s clear that MSC wants to compete with the likes of Carnival and Norwegian Cruise Lines.

One of the first things you will notice on an MSC ship is that the company is used to catering to multiple languages.  Most of the crew will speak 5 or 6 languages, the dinner menu is in 5 languages, and often there are passengers on board that speak Italian, French, or German.

On my first cruise on an MSC ship with the MSC Poesia, every announcement was made in 3 languages and even the activities director had a translator at the end of every show in the theater.  Fortunately for me (as an English speaker), this MSC cruise was more catered to an English audience and announcements were made only in English.

Watch VIDEO tour of the MSC Divina below:

There are 3 main pools on the Divina and another pool in the exclusive yacht club.  The center pool has 3 kiddie pools around it that are about 6 inches deep, and there are dividing walls to help keep smaller children out of the main pool.  The garden pool at the back of the ship is used for water aerobics as well as just a regular pool.  The pool in Le Sirene is a beautiful part of the ship that has a retractable roof and 3 hot tubs around it.  I counted at least 12 hot tubs throughout the ship so it’s not hard to find an empty hot tub to relax in privacy.

The Solarium is only accessible if you pay a small fee ($5 for half a day or $10 for a full day) but it offers a large hot tub as well as comfy seating stations for 2 that can be reserved.  This is deck 18 and offers great views all around the ship. 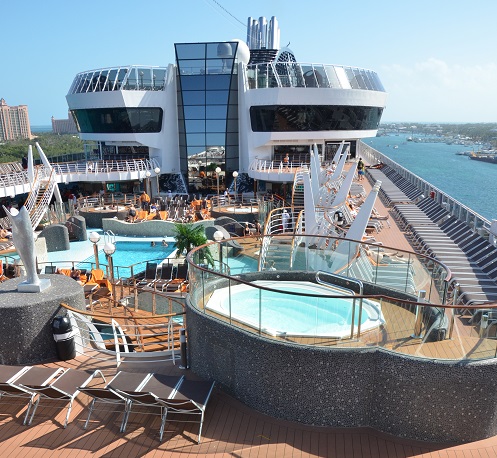 What is there to eat?

I found the food in the main dining room to range from fair to good.  The desserts were excellent, but the menu choices were somewhat limiting in scope.  The wait staff was kind enough to make any changes to my orders, although a little more attention to detail would have been appreciated.  All in all, the main dining room food was good and usually a much better option than the buffet.

The Calumet buffet is beautiful and elegant as well with a mixture of oriental and Aztec décor.  The pizzeria in the buffet offers all kinds of pizza any time you want (from noon to midnight).  I enjoyed the wonderful flavors of the thin pizzas and the constant variety.   Hamburgers and French fries were served in the buffet several times, and I’m not sure if this was a plan to make American passengers feel at home or not.  The hamburgers were pretty good though.  The rest of the buffet offered varieties of meats, pastas, and vegetarian choices.  My favorite part of the buffet is at the very back of the ship where there is more spacious seating and a great view out the windows.

The specialty restaurants include the ritzy Ristorante Italia, the chain Eataly Steakhouse,  and the Galaxy Disco which is on deck 16 and offers great views while you eat.

Be sure to try the gelato while on board the Divina.  It cost me $4.05 for some gelato in a waffle cone but it was incredibly delicious.  You can also get ice cream for free on the pool deck between noon and 6pm.

Fun things to do on the MSC Divina 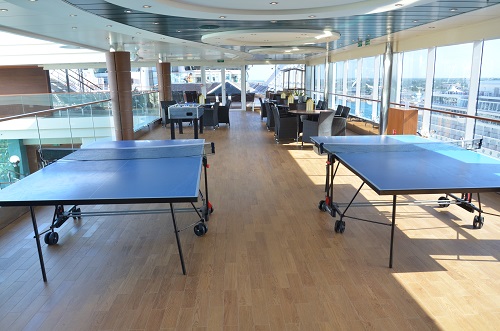 While sometimes it’s nice to just relax on a cruise ship, some cruisers like to entertain themselves as well.  Here are a few amenities the Divina offers.

The sports arena has a tiny basketball court that is awkwardly positioned on the small space more suitable for soccer as it has small goal posts on either end, but the basketball goal is mounted to the side of a wall.  I was told that sometimes tennis is played here, but that would take up the entire arena if just one match was going on.

The arcade is small but adequate and has some shooting and racing games.  But if you really want to have a racing experience, there is a formula 1 racing simulator in which you can sit inside a race car and feel the car move as you drive down the track.  There is an extra cost for this, however, as there is for the 4D theater that is right next to the simulator.  Viewers in the 10 seat theater will feel their hair blow back and the seats move as the 3D screen pops out at them and they ride a roller coaster or take part in a few other 4D adventures.

There are ping pong tables and a foosball table right above the Le Sirene area toward the front of the ship, but to get ping pong balls or foosballs you have to walk to the opposite end of the ship and sign them out.  The same goes for playing basketball, and if you don’t return it MSC will charge you $30.

There is a small bowling alley in the sports bar.  There are only 2 lanes and the pins are small but it looks like a lot of fun as you go head-to-head with your opponent and your scores are shown on the big screens.

Speaking of the sports bar … I really liked the layout.   There are 7 or 8 stations with big screen tvs.  While I was on the ship there were some big NFL games so the sports bar was a popular area.  You can also order wings and burgers here, but it’s going to cost 7 or 8 dollars a plate.

There are trivia challenges and games throughout the week as well and in the Daily Program you will see sports challenges like volleyball and basketball competitions at their private island.

There is a cozy 11,000 square foot casino on the Divina as well, full of slot machines, black jack tables etc.  They even have those quarter machines so it’s a good place to visit when the ship is rocking =). 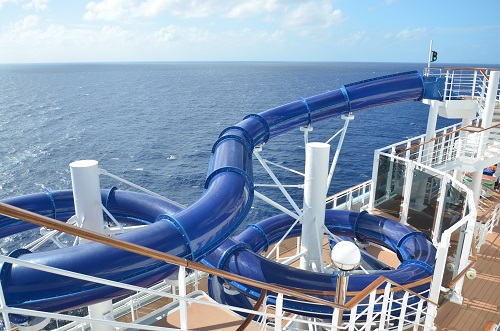 The shuffleboard court is in a really bad area, being right near the entrance to the waterslide so if you tried to play during the day your game will have to constantly be suspended.

I do like that the waterslide is not near the main pools but off by itself.    You will happen to walk by it a lot on deck 14 as it’s one of the only access points to the garden pool in the back so be careful not to slip on the wet surface of the deck.

There is a large LED TV screen on the main pool deck that plays a few movies and music concerts.  The MSC crew pick up all the lounge chairs at night so there isn’t really a good place to watch the movies unless you pick up a chair and move it onto the center area.

The Aurea Spa provides a serene and relaxing atmosphere.  The massage rooms and wet and dry saunas are all brand new and top notch.  In the main lobby of the spa there is a smoothie bar where you can get a healthy drink after a workout or therapy session.  The fitness center was impressive with exercise bikes for spinning classes, treadmills, ellipticals, free weights, and all kinds of exercise machines. There was also a room for yoga classes next to the gym.

The jogging track on the ship is really a joke so if you want to run, you will have to hit the fitness center. 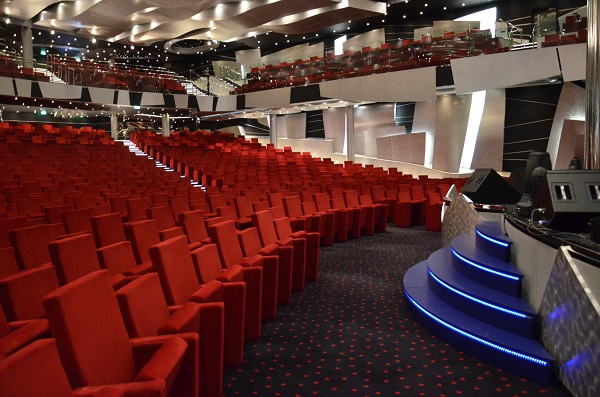 The Pantheon Theater is a beautiful  1,600 seat theater with wonderful décor in deep brilliant reds and shiny silver.

MSC has come a long way with their entertainment.  The shows on the Divina were enjoyable and fun.    While on this 3 day cruise some of the shows included a tribute to ABBA, a tribute to Michael Jackson, The Witches of Paris, and Wonderland (MSC’s take on Alice in Wonderland in which the hatter has a striking resemblance to Johnny Depp).  The shows dazzled the senses with elaborate costumes and daring acrobatics.  The crowd seemed to really love the shows and even if the music selections were not everyone’s cup of tea, the performances certainly offered 40 minutes of entertainment that left you smiling.

The lounges on the ship are well themed and decorated to provide a fun and relaxing atmosphere.  I particularly liked the Golden Jazz lounge that featured dueling pianos.  These guys were very good and were well-received by the guests.

I had an ocean view room on deck 5 of the Divina, and it was much more spacious than I thought it would be.   The bathroom was both simple and elegant and offered a spacious shower due to the doors being collapsible plastic walls (you can see them in the video).   The crew did a good job of keeping my room clean, although I didn’t have any animal-shaped towels waiting for me on my bed.  The bed was comfy but was situated so far from the flat screen TV that it was a little impractical to watch from bed.  There was plenty of closet space, a safe to store my valuables, a minibar, a hairdryer, and two 110 outlets along with two 220 outlets.

Check out a video review of my ocean view room on the Divina below:

Overall, the MSC Divina was a beautiful ship which felt classy in every aspect.  As to the food and service that MSC provides some improvements can be made, but I have already seen many improvements with MSC in the last couple years, so I know they are listening to their guests.  Their prices are very reasonable so it’s well worth checking out the Divina for yourself.

J. Souza
Jon got hooked on cruising after his first cruise on his honeymoon, and today he is always looking for cruise deals and reading information about the cruise industry. Jon lives in the foothills of North Carolina and wishes there were a cruise port that far inland. Jon can be reached at [email protected]
ShipsMSCMSC Divina Cruise Ship Review, Tips and VIDEO Tour
Previous article
Disney Cruise Line Voted Best Cruise Line for Families
Next article
Queen Mary 2 Delayed in New York Due to Snow

8 Reasons to Take a Cruise on MSC Seaside, the Hottest New Cruise Ship Sailing to the Caribbean

8 Must See Features on MSC Divina

8 Reasons to Take a Cruise on MSC Seaside, the Hottest New Cruise Ship Sailing to the Caribbean

8 Must See Features on MSC Divina