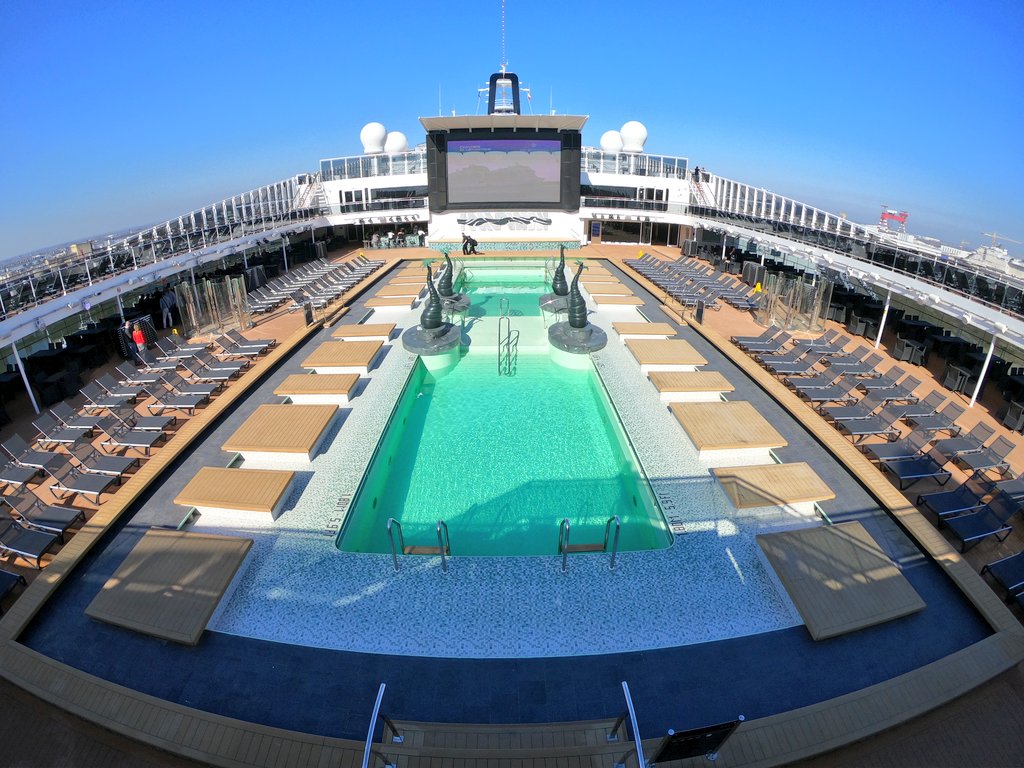 MSC Cruises invited me onboard to get a sneak peek of their newest cruise ship before the christening ceremony. MSC Bellissima is the second Meraviglia class ship from the cruise line and comes in at just over 171,000 gross tons. The first Meraviglia class ship, MSC Meraviglia, will sail a handful of cruises from New York later this year before repositioning to the Cruise Capital of the World, PortMiami.

After spending several nights onboard MSC Bellissima, here are the seven things that I loved about this new cruise ship.

One of the trademark features on MSC Bellissima is the overhead LED screen that lines the promenade. It’s the longest LED screen at sea and it’s nearly as long as a football field. It reminded me of Freemont Street in Las Vegas.

The screen changes every 30 minutes creating a different feel each time you walk through the area. Several times each evening, the LED screen turns into a really cool light and sound show. The promenade is full of shops, specialty restaurants, and lounges. 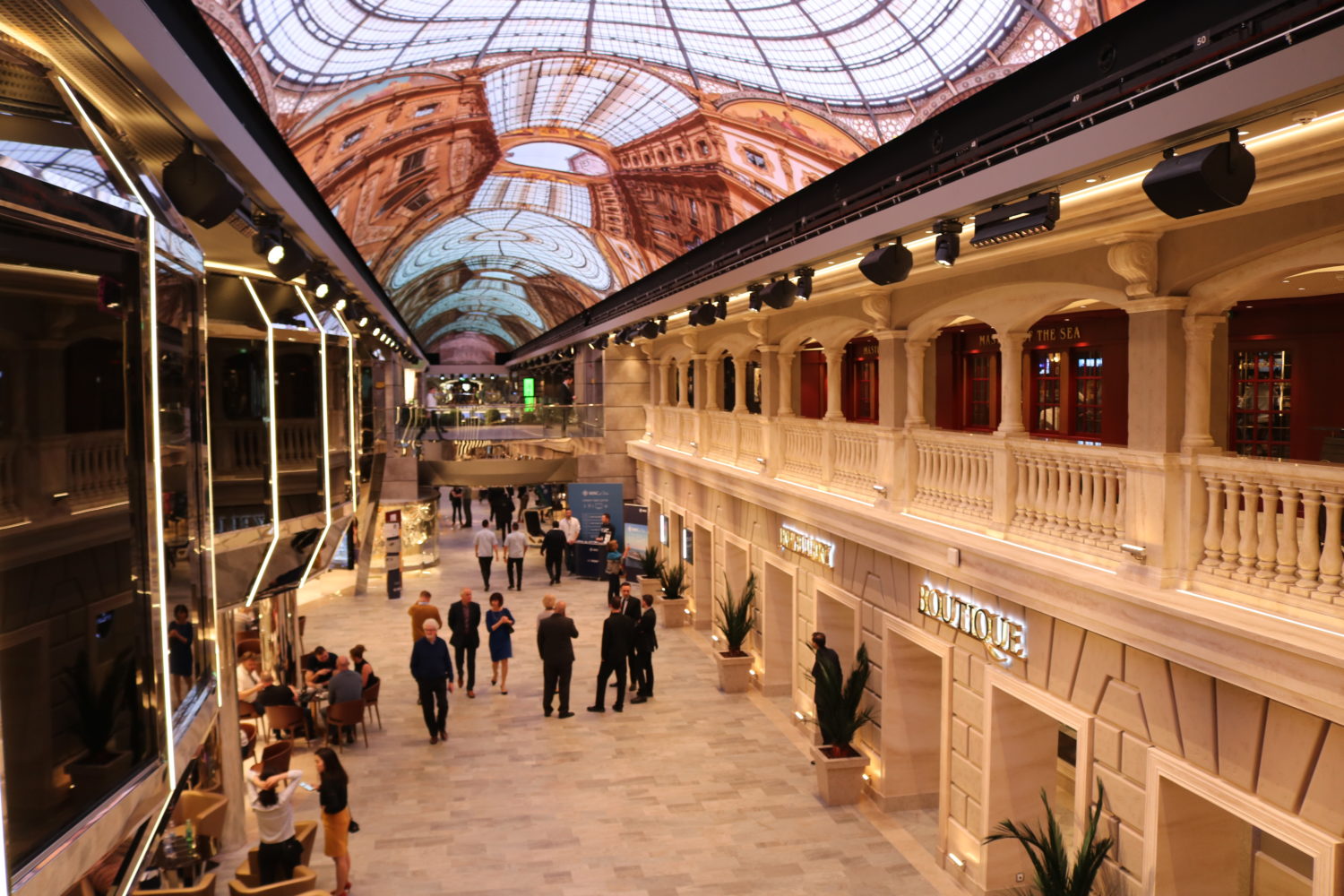 Have you ever been a cruise ship that had a long promenade and tried to walk through it when an activity was going on? It’s not fun trying to squeeze by everyone is it? On MSC Bellissima, the second level has a walkway that extends the entire length of the promenade. This dramatically helps passenger flow through the heart of the ship.

Let’s be honest for a moment. We all hate waiting in lines but we know that it’s part of taking a cruise. MSC Cruises has added several new features that will help eliminate/shorten lines and make your cruise go smoother.

MSC has eliminated the need to register your credit card when checking in for your cruise. There are kiosks all over the ship where you can do at it your convenience. For those who want to pay cash, there are other machines where you can load cash right onto your onboard account. This keeps the line down at guest services. The less time you spend in line, the more time you can spend enjoying your cruise. 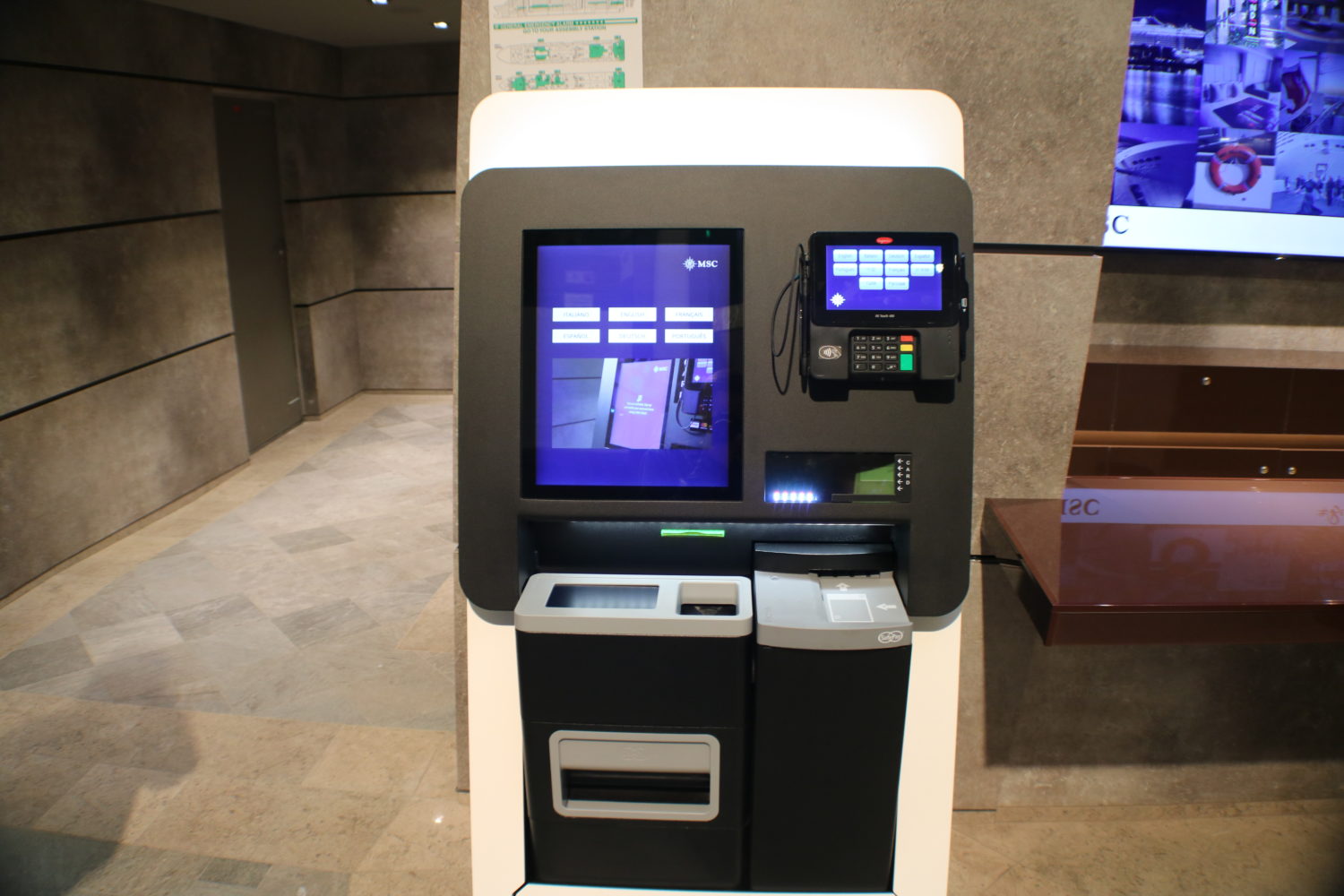 A chocolate factory on a cruise ship? That’s exactly what Jean-Phillipe Chocolat and Café is on MSC Bellissima. Jean-Phillipe Maury is a two time world champion in pastry.

Located on the lower level of the awesome promenade, you can customize your own chocolate bar or watch the chocolatiers make chocolate.

There’s also an ice cream parlor and créperie.  The coffee is nothing short of divine not only here, but also all around the cruise ship. 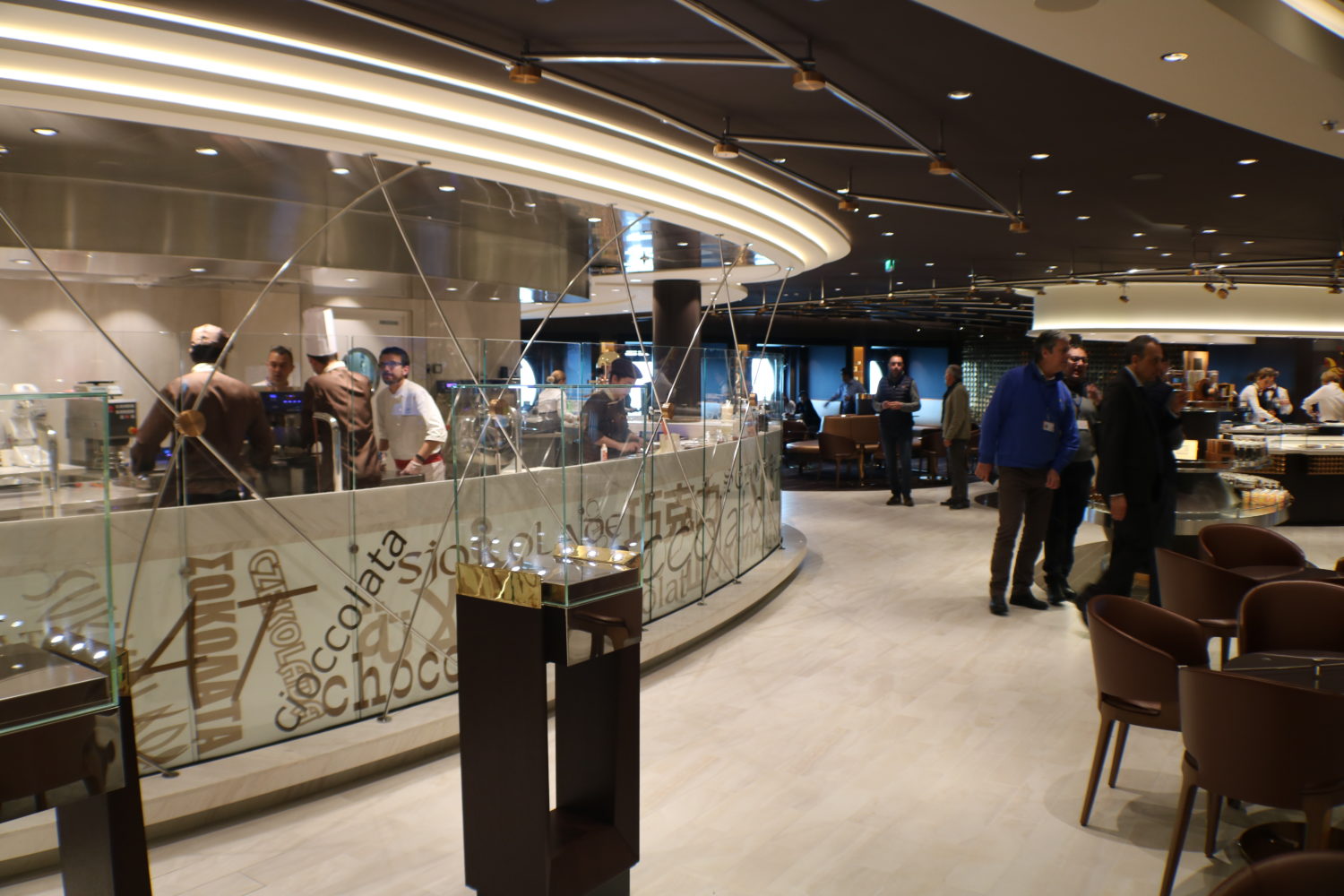 Anyone who has been a reader of Cruise Fever knows that I love dining at specialty restaurants on cruises.  MSC Cruises has partnered with celebrity chefs and I was able to try the food at several of the restaurants onboard.

Butcher’s Cut is an American steakhouse onboard and I dined at one evening. It was one of the best meals I’ve had in a steakhouse on a cruise.

I was also able to try HOLA! Tapas Bar by 2* Michelin chef Ramon Freixa and it did not disappoint.  There’s also a French bistro, teppanyaki restaurant, and a sushi bar.  All of the specialty restaurants are located around the 300 foot long promenade.

As ships have gotten larger over the past decade, the main pool areas seem to be shrinking. MSC Bellissima has a nice open pool deck with a large TV screen. This is going to be a great way to spend a sea day. 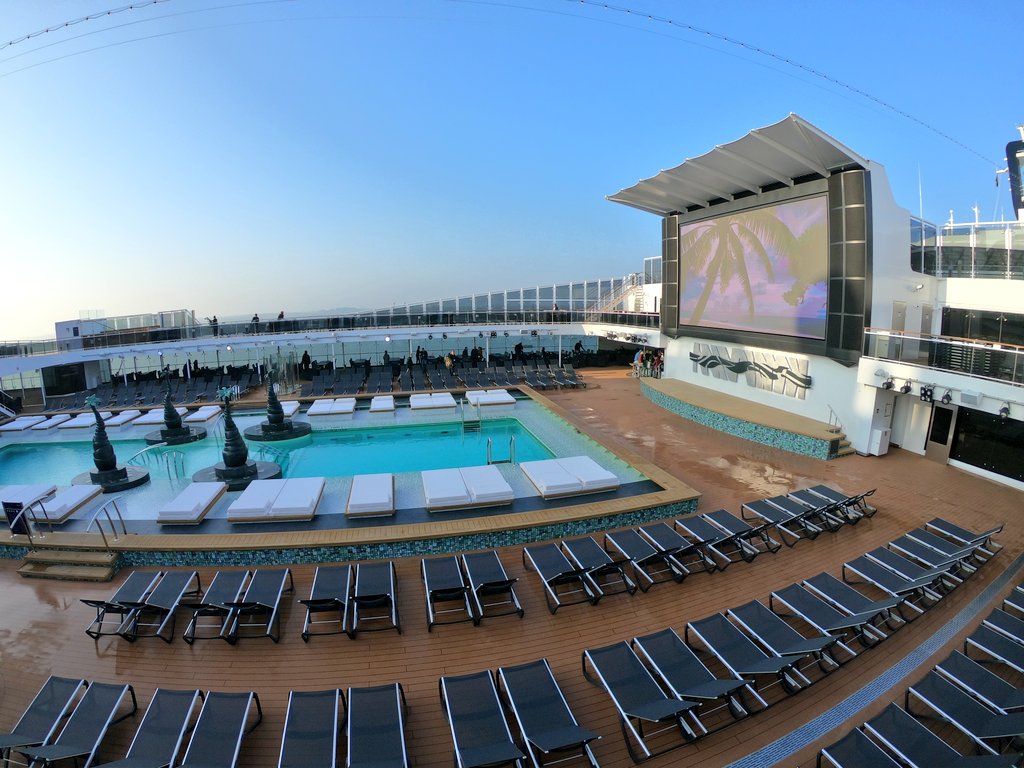 There’s also an indoor/outdoor pool with four hot tubs and an aft pool by the water park.

The sports zone has a little bit of everything. There’s an indoor basketball court, a full size bowling alley, two F1 simulators, a 4D theatre, and virtual reality games. It’s a great spot for families to spend time together. 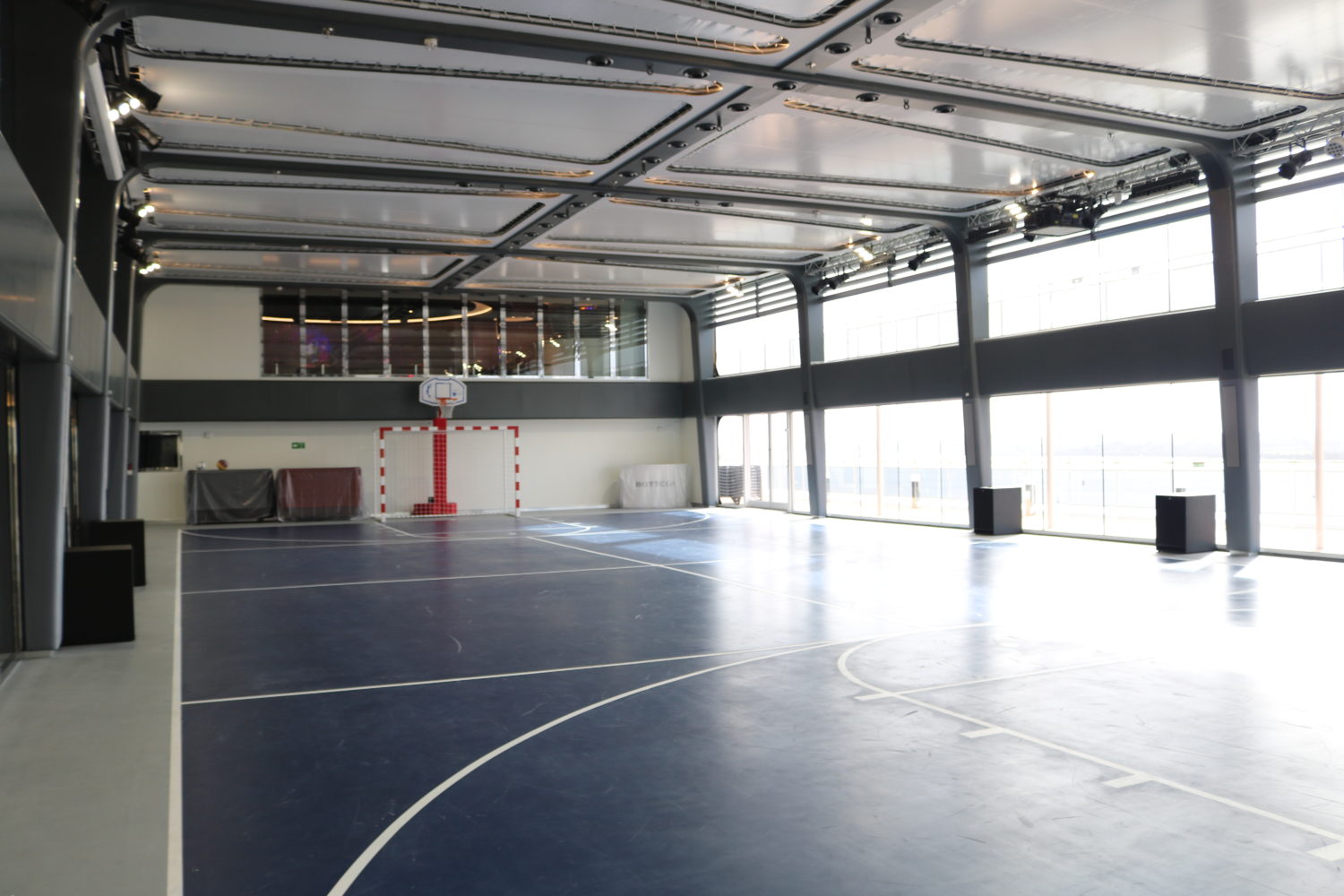 MSC Cruises is incorporating technology to make the cruise experience even better. MSC Bellissima features a cruise industry first, a virtual assistant named Zoe that is found in every stateroom. 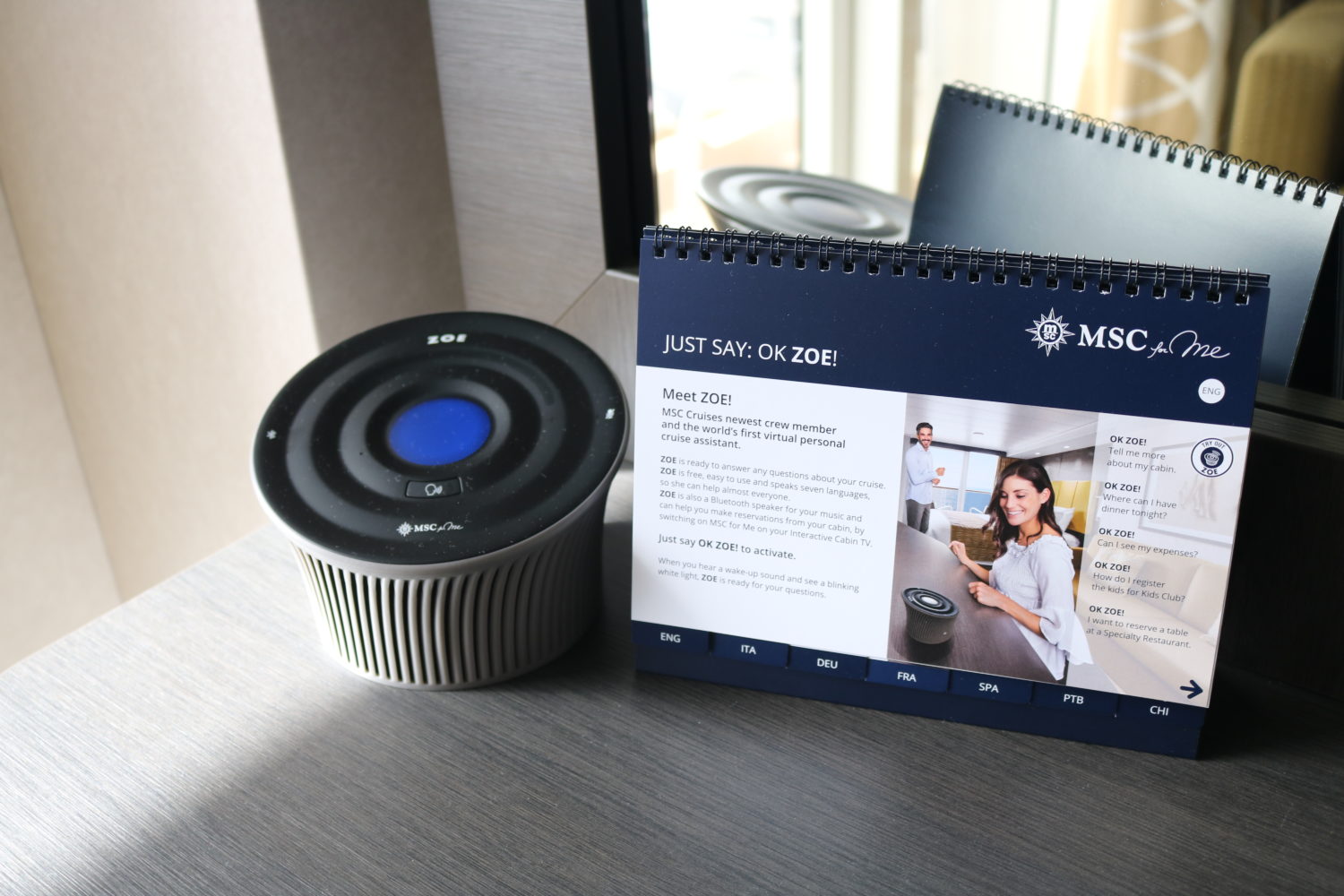 What is Zoe? It’s just like Amazon’s Alexa, but for cruises. You can ask Zoe any question about your cruise, and get an immediate response. From the times of the shows to what time you will be in port, Zoe will tell you. You can even book reservations for specialty restaurants with Zoe. (Tip: Book the steakhouse Butler’s Cut, it’s phenomenal.)

Zoe isn’t replacing the human element of customer service on cruises, it’s just an additional enhancement to make your cruise even better. Zoe understands seven languages and over two million questions were asked during the testing process of this new digital virtual assistant.

Odds and Ends That I Loved

MSC Bellissima raises the bar on entertainment on cruises with two brand new Cirque du Soleil at Sea shows. There’s a custom made theater in the aft of the ship that is used exclusively for these shows.

The spa has an awesome thermal suite area with a great variety of different saunas and steam rooms.

There’s an awesome aquapark with several different waterslides that will be the perfect way to cool off on a hot sea days.

The Swarovski crystal staircases, a trademark on all new MSC cruise ships, make the perfect backdrop for photos.

After spending five days onboard MSC Bellissima, I can’t wait until MSC Meraviglia arrives in Miami later this year.

Ben Souza
Ben is a world traveler who has visited 40+ countries and taken over 70 cruises. His writings have appeared and been cited in various media outlets such as Yahoo News, MSN, NPR, Drudge Report, CNN, Fox, and ABC News. Ben currently resides in Cincinnati, Ohio. Follow Ben on Instagram. Visit Ben Souza on Linkedin. You may email Ben at [email protected]
ShipsMSC7 Things I Loved About MSC Bellissima
Previous article
Cruises to Tahiti and Bora Bora on Sale for the Next Two Weeks
Next article
Carnival Cruise Line Announces Officers for Cruise Ship Receiving $200 Million Renovation