I am currently sailing on one of the world’s newest cruise ships, Costa Toscana. This new ship was christened two days ago in Barcelona and is offering cruises around the Mediterranean. 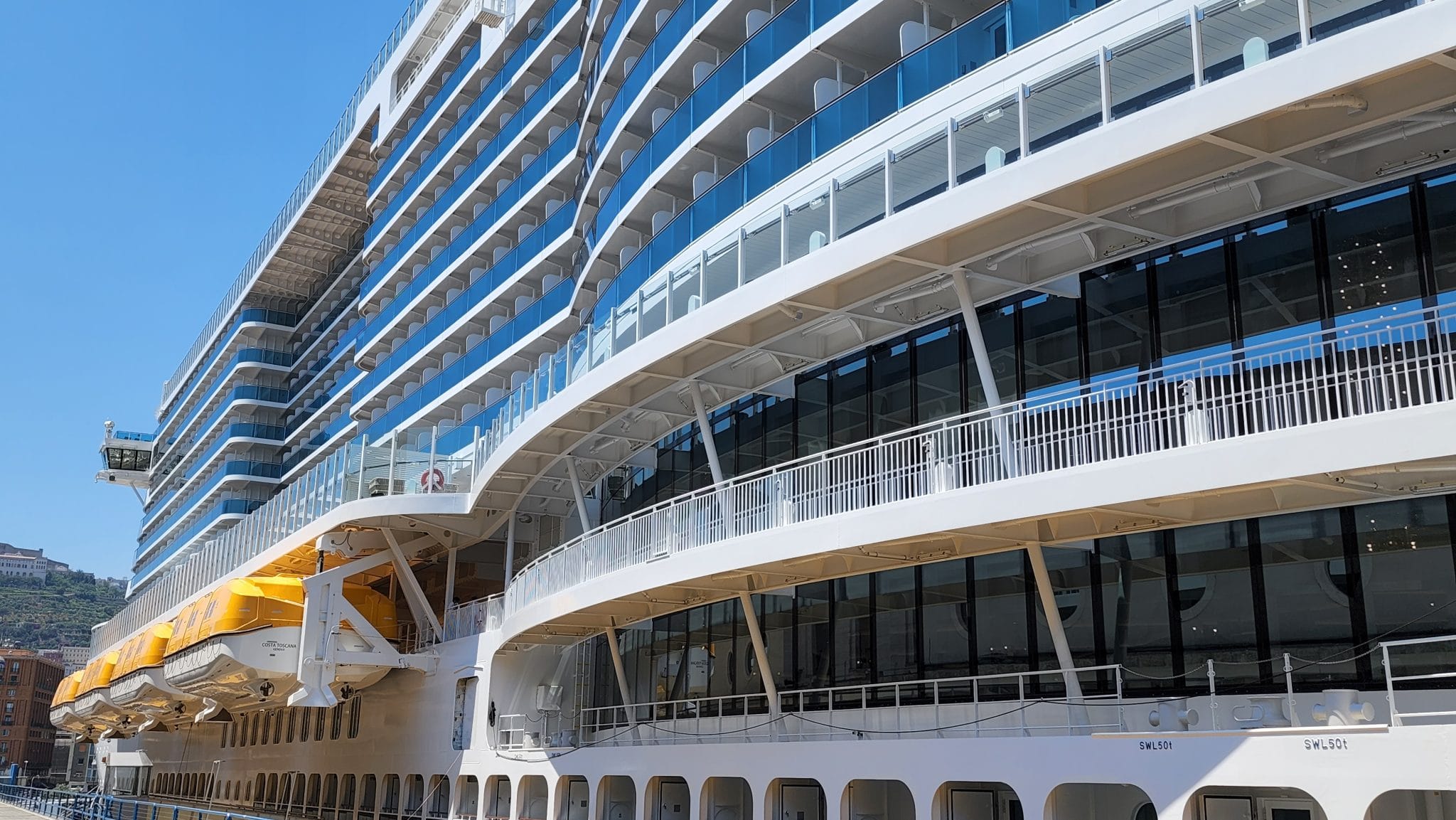 After spending a couple days onboard the ship, here are my first impressions of Costa Toscana. Note: I am sailing as a guest of Costa Cruises for the ship’s christening and to check out everything that this ship has to offer.

Embarkation: I boarded the ship in Rome (Civitavecchia) and embarkation was a total breeze.  Since you can board the ship in just about all of the ports offered on the cruise, you don’t have everyone checking in on the same day.  This dramatically cuts down on lines and makes embark take just a couple of minutes.

I stayed in the heart of Rome for one night pre-cruise and took the train from Rome to the port.  A first class ticket was only 15 Euros and it took a little under an hour. It was super easy and much cheaper than taking a cab that would cost 10x as much.

Ship: Costa Toscana is one of Carnival Corporation’s 180,000 gross ton LNG powered cruise ships. It’s a sister ship to Carnival’s Mardi Gras but has many different features.  The Colosseo (atrium) is one of my favorite parts of the ship.  I will go into more detail on it after the cruise is over but it’s one of the best, if not the best atrium on any cruise ship.

Many shows take place here as there’s stadium seating on decks 6, 7, and 8 surrounding the Colosseo.  From wraparound screens to a rising floor, this unique space offers almost unlimited potential for entertainment in the heart of the ship.

The indoor pool area is also one of my favorite spots and this is something that I think every ship should have.

Crew: The crew on Costa Toscana have been wonderful so far.  From my cabin steward to those who work at Cafe Vergnano 1882 (coffee shop), I am always greeted with a friendly hello and many already call me by name when they see me.

Also, I want to give a shoutout to Alvin who works at Leonardo Gran Bar.  He’s been awesome this entire cruise. I can’t say enough good things about him.

Entertainment: If there is one thing that is lacking on this ship, it’s not entertainment. At night, there is live music all over the ship and shows in the theatre and atrium.  The entertainment goes late into the night and the ship is alive until well past midnight.

Food: This has been one of the most surprising things about my cruise so far.  I have never sailed on Costa Cruises before a few weeks ago and was a bit hesitant based on things that I heard from the past.

I have yet to have a bad meal on the cruise and everything has been great so far. I have dined at several of the specialty restaurants including the pizzeria, steakhouse, Nutella Bar, and the pub. The food has really impressed me and the steak in the steakhouse was one of the best I’ve had on a cruise.

While I can’t speak for most of the ships in Costa’s fleet, the dining on Costa Toscana has been a pleasant surprise.

Spa/Thermal Suite: They were offering a special in the spa where you could get a 50 minute massage and thermal suite access for the week for only 199 Euros.  The thermal suite is huge and has everything from a traditional sauna and steam room to a snow room and salt room.  Everything is spaced out with some rooms down hallways so it feels big and roomy.  When you’re trying to relax, this is important instead of having everything right off of the pool in there.

This is an Italian cruise line so the majority of passengers on the ship are Italian.  However, English is spoken by all crew members and the cruise director will speak in Italian and English after/before shows.

I will have a full review of Costa Toscana after I get home from this seven night cruise. Until then, you can follow along on Cruise Fever’s social media sites at Twitter, Instagram, and TikTok (@CruiseFever).

Our cruise visits Naples (where I went to the place where they invented pizza), Barcelona, Valencia, Marseilles, and Savona.

Ben Souza
Ben is a world traveler who has visited 40+ countries and taken over 70 cruises. His writings have appeared and been cited in various media outlets such as Yahoo News, MSN, NPR, Drudge Report, CNN, Fox, and ABC News. Ben currently resides in Cincinnati, Ohio. Follow Ben on Instagram. Visit Ben Souza on Linkedin. You may email Ben at [email protected]
Cruise NewsFirst Impressions of One of the World's Newest Cruise Ships, Costa Toscana
Previous article
Cruise Ship Switching Cruise Lines Over to Carnival
Next article
What Happens if There is a Hurricane During My Cruise Dates?