Queen Mary 2 Delayed in New York Due to Snow 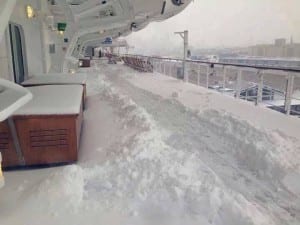 Update: The Queen Mary 2 sailed from New York at approximately 12:30 a.m. on January 4, 2014. The ship is scheduled to arrive in Southampton on time.

Winter Storm Hercules, which dumped up to 2 feet of snow on the Northeast, has delayed the Queen Mary 2 in New York City.  The cruise ship was scheduled to leave port at 5 p.m. on Friday, January 3.  Cunard released a statement saying the the ship will not depart before midnight and that check-in will close one hour prior to sailing.

The cruise line decided to delay the departure of the ship to allow extra time for passengers who have been delayed arriving in New York.  Many of the flights heading into the airport in New York were delayed until the massive snowstorm moved out of the area.

The Queen Mary 2 is scheduled for a 6 night transatlantic cruise that ends on January 10, 2014 in Southampton, England.  The cruise ship was built in 2003 and is the only transatlantic ocean liner in service between New York and Southampton.

Built for ocean crossings, the vessel has a top speed of 30 knots (35 mph) and has 40% more steel than a regular cruise ship.  She was the largest cruise ship in the world when she was built but has now been surpassed by 6 other cruise ships (5 Royal Caribbean, 1 Norwegian).

Cruise Fever will continue to monitor the Queen Mary 2 in New York and will update this page as more information becomes available.