MSC Cruises, the Swiss-based world’s largest privately-owned cruise line and brand market leader in Europe, South America and South Africa, hosted the glamorous, high-profile event in Le Havre, with entertainment from top international performers and an exclusive gala dinner in the company of special guests, authorities, key partners from the travel industry, global media and top management from MSC Cruises and its parent company MSC Group. Gianluigi Aponte, MSC Group’s founder and executive chairman as well as the ship owner, attended together with the Aponte and Aponte-Vago families.

Pierfrancesco Vago, MSC Cruises’ Executive Chairman, gave the following statement: “We have an ambitious vision for the future and MSC Meraviglia marks the start of the second phase of growth for our Company. For this reason, this evening is an extremely proud moment for all of us at MSC Cruises as we see the first of our next-generation ships being named.”

MSC Meraviglia is the Company’s new flagship and the 13th addition to the MSC Cruises fleet as well as the first new MSC Cruises ship due to come into service under the Company’s industry-unprecedented investment plan.

Both the ship herself and tonight’s event have been inspired by the wonders of the world, as Meraviglia literally means wonder. The christening ceremony itself was hosted by one of Europe’s most loved comedians, Gad Elmaleh. The audience was entertained by internationally renowned artist Patrick Bruel who performed a selection of his most loved songs. UNICEF Goodwill Ambassadors Kids United also performed to represent a diverse world, promoting peace and tolerance. 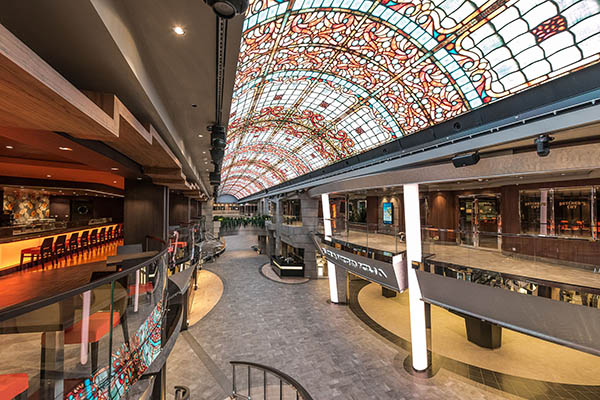 At 1,034 ft. long and 214 ft. tall, with an impressive 19 decks and capacity of 5,700 guests (4,488 at double occupancy), MSC Meraviglia is not only poised to become one of the biggest cruise ships at sea, but also one of the hottest holiday destinations, packed with innovative features to provide an unforgettable experience.

MSC Meraviglia will commence her maiden voyage from Le Havre to Genoa on June 4 and then her summer itinerary from Genoa from June 11. MSC Meraviglia will offer multiple embarkation ports in the Western Mediterranean including the popular ports of Genoa, Marseille and Barcelona as well as visit other much sought after Mediterranean destinations including Naples, Messina in Sicily and Valetta in Malta.