Port Everglades has announced an investment of over $100 million for a complete makeover of Cruise Terminal 25, which will continue to be a preferential berth for Royal Caribbean Cruises, Ltd. as part of a new long-term agreement approved unanimously by the Broward County Board of County Commissioners. 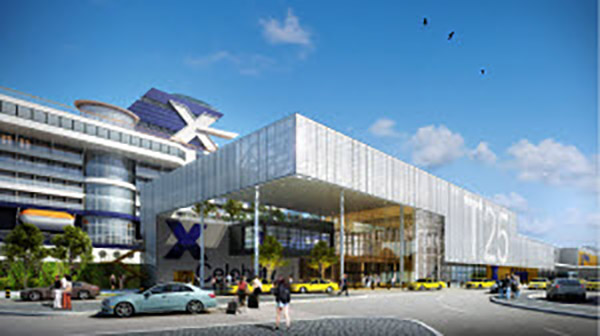 The new agreement replaces the current RCCL agreement, which expires at the end of 2017, and continues through September 30, 2026, with options to extend the terms for an additional four years, followed by an additional five years. RCCL owns both Royal Caribbean International and Celebrity Cruises cruise lines, both of which sail from Port Everglades.

Cruise Terminal 25 was originally built in 1992. A section to provide an additional elevator was completed in 2004.

Beginning December 2018, Celebrity Edge, the first ship in Celebrity Cruises’ new class of ships in nearly a decade, will also be sailing out of Port Everglades. Designed in 3-D, and featuring the work of A-list global architects and designers, the 2,918-guest Celebrity Edge was designed to bring the outside in and aims to make discerning global travelers redefine how they experience the world and how intimate a vacation can be.

Port Everglades Chief Executive and Port Director Steven Cernak, gave the following statement: “Renovating Cruise Terminal 25 was already part of our Master/Vision Plan, and was scheduled to begin this year. Giving preferential berthing rights to Royal Caribbean allows us to build a facility that meets their expectations for the new generations of larger cruise ships and for the new Celebrity Edge, which is scheduled to homeport at Port Everglades beginning in December 2018.”

Ben Souza
Ben is a world traveler who has visited 42 countries and taken over 50 cruises. His writings have appeared and been cited in various media outlets such as Yahoo News, MSN, NPR, Drudge Report, CNN, Fox, and ABC News. Ben currently resides in Cincinnati, Ohio. Follow Ben on Instagram. Visit Ben Souza on Linkedin. You may email Ben at [email protected]
Cruise NewsPort Everglades Investing $100 Million to Renovate Royal Caribbean Cruise Terminal
Previous article
Royal Caribbean Brings Back Corkage Fee
Next article
Five Signs You Might Like A River Cruise