Carnival Cruise Line will be sending their newest and largest cruise ship, Carnival Panorama, to California when the ship makes its debut next year. 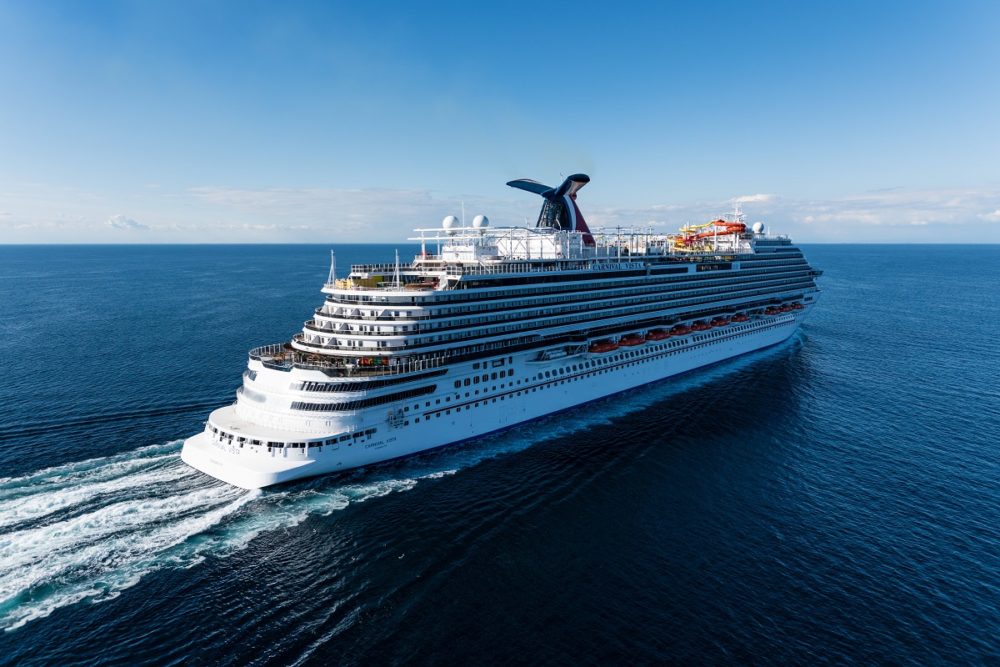 Carnival announced several significant initiatives designed to further bolster its leadership position on the West Coast: the deployment of Carnival Panorama to Long Beach in 2019 – the first new Carnival ship based in Southern California in 20 years; the grand re-opening of its 146,000-square-foot state-of-the-art Long Beach Cruise Terminal, and a multi-million-dollar port development project in Ensenada, Mexico, that will provide guests with one-of-a-kind experiences ashore.

In 2019, Carnival will make history when it deploys its third Vista-class cruise ship, the 3,960-passenger Carnival Panorama, on seven-day Mexican Riviera cruises from Long Beach, providing an exciting new seagoing vacation option to this vital and fast-growing market.

Like its name implies, Carnival Panorama will include venues offering both indoor and al fresco experiences, including the Fahrenheit 555 steakhouse, Library Bar, and Bonsai Sushi, along with open-air attractions like the groundbreaking bike-ride-in-the-sky attraction SkyRide, a massive WaterWorks aqua park, and the SportSquare recreation area.

Also featured will be a vibrant Havana section with tropics-inspired staterooms and its own Cuban-themed bar and pool, Family Harbor featuring extra-roomy accommodations, the Family Harbor Lounge, and Ocean Plaza, a spacious dining and entertainment venue with indoor and outdoor seating. Other innovations unique to Carnival Panorama will be announced in the near future.

Reservations for Carnival Panorama are expected to open in late March 2018.

Carnival’s Long Beach Cruise Terminal – the busiest in North America with ships docking five days a week representing a 70% utilization rate – has been operated by Carnival since 2003 and encompasses the world’s largest, free-span geodesic dome originally built to house also Howard Hughes’ Spruce Goose plane and served as the location for many famous Hollywood movies.

With the expansion, Carnival is now utilizing 100% of the dome, up from a portion, for its operations. The renovation of the Long Beach Cruise Terminal more than doubles the size of the facility’s space while dramatically enhancing the overall passenger experience and operational flow. It also includes the expansion of portside shore power to enable larger ships to plug into the local electric grid, reducing exhaust emissions while docked.

The terminal’s striking design features California’s recognizable landmarks, bringing indoors the state’s iconic natural elements, including a backdrop of the majestic Sierra Nevada mountain range. In a nod to the dome’s former tenant, a replica of the Spruce Goose hangs from above, as well as the original model of the plane used in the 2004 movie, “The Aviator.” The dome also includes the cruise industry’s first 1980s-style arcade which is available for families to enjoy.

The grand re-opening of the terminal coincides with the arrival of Carnival Splendor to Long Beach, which operates seven-day cruises to Mexico and longer-length voyages to Alaska and Hawaii, representing a 40 percent capacity increase on this route.

The 113,300-ton Carnival Splendor is currently the largest ship based year-round in Southern California and offers a variety of onboard amenities, including a 22,750-square-foot Cloud 9 Spa, a reservations-only steakhouse serving prime dry-aged beef and other gourmet fare, a sliding magrodome covering the main pool area, and nearly 600 balcony staterooms.

Carnival Splendor joins Carnival Imagination and Carnival Inspiration which sail three- and four-day cruises to Ensenada and Catalina Island. Together, these three ships carry approximately 600,000 guests annually from Southern California on more than 250 three- to 14-day cruises, offering an unbeatable mix of destinations that appeal to a broad range of consumers, including families seeking an attractive and affordable vacation option.

Ben Souza
Ben is a world traveler who has visited 40+ countries and taken over 70 cruises. His writings have appeared and been cited in various media outlets such as Yahoo News, MSN, NPR, Drudge Report, CNN, Fox, and ABC News. Ben currently resides in Cincinnati, Ohio. Follow Ben on Instagram. Visit Ben Souza on Linkedin. You may email Ben at [email protected]
Cruise NewsCarnival Cruise Line Sending New Cruise Ship to California
Previous article
Most Sought-After Cruises Around the World
Next article
Windstar Cruises Returns to Alaska in 2018 With New Cruise Tours