Itinerary – Viking sails this itinerary from London to Bergen and in reverse from Bergen to London.  We sailed from London to Bergen and if you had the choice, I would choose to begin in London.  Why? Every port we visited throughout the cruise got better and better as we lead up to the stop in Geiranger (more on that below). There is not one bad port stop on this itinerary.

After two days in London, we made three stops in Scotland: Edinburgh, Orkney Islands, and the Shetland Islands.  After leaving Scotland, we headed north of the Arctic Circle to visit Lofoten, Honningsvåg, and Tromsø, before finishing the cruise in Molde, Geiranger, and Bergen. We visited medieval castles, saw the Shetland ponies, cruised through gorgeous fjords, and walked on glaciers.

Midnight Sun – Why is this itinerary called Into the Midnight Sun?  For several days on our cruise, we enjoyed 24 hour a day sunlight. Yes at 1 am, the sun is shining and it’s really something to experience.  Below is a photo that we took at midnight one night of our cruise. 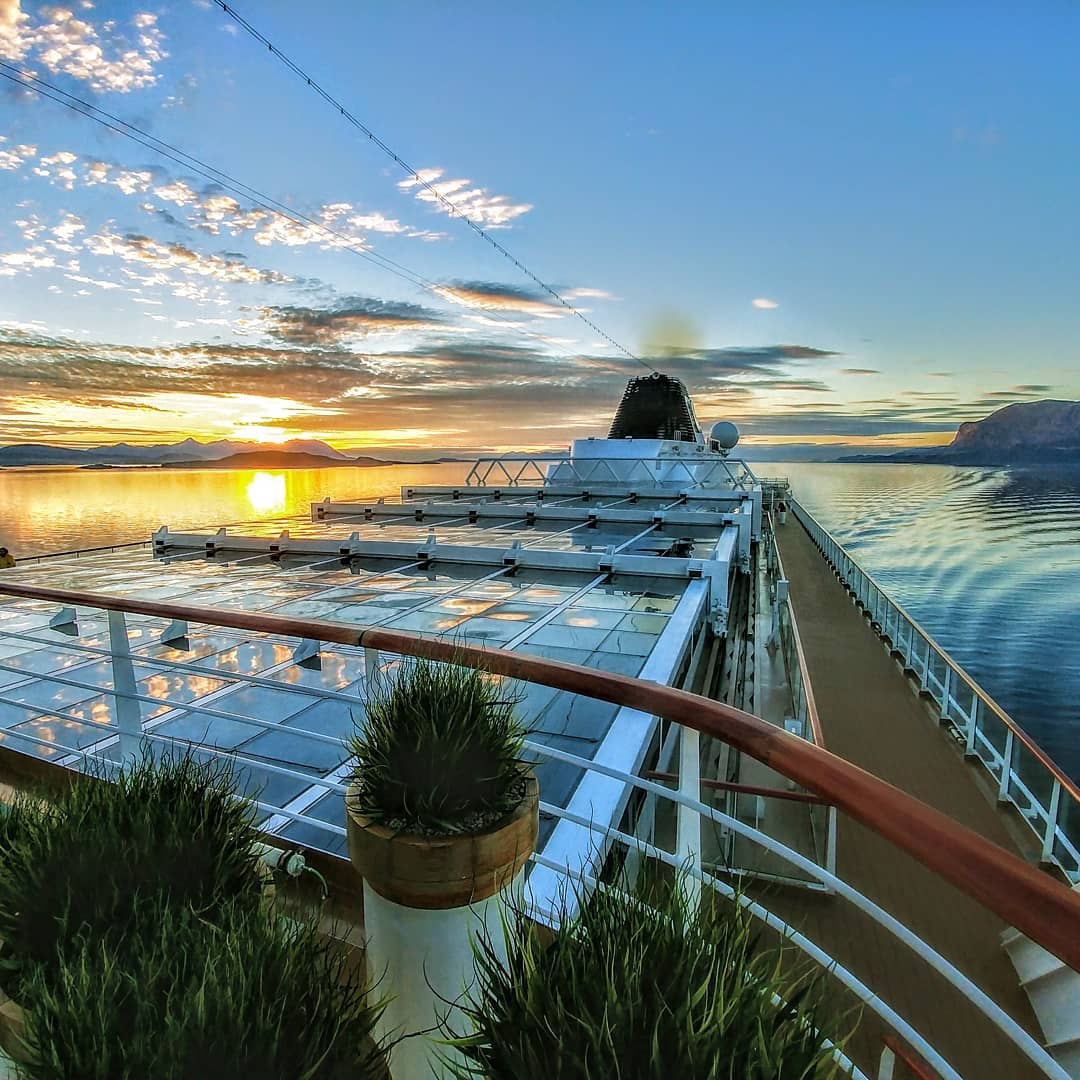 Sea Days are Scenic Days – There are three sea days on this itinerary, although it’s really only one true sea day.  Why? During the last two sea days, we cruised through the fjords of Norway offering some of the most spectacular sights I’ve ever seen from a cruise ship.  We passed the Seven Sisters Mountain Peaks, a mountain with a hole in the middle of it, numerous picturesque little towns, snow capped mountains, and beautiful scenery.

Overnight in London/Bergen – In both cities, you have an overnight stop.  Why is this important?  This allows you to actually visit and see those cities.  Without the overnight stop, you’d either have to arrive early or stay late (both on your dime) to see both of these incredible places.

One Free Excursion in Every Port – When you’re visiting some of the most beautiful places on earth, staying in the cruise port area is just not an option.  With Viking, they offer one free excursion in every single cruise port.  This adds up to significant savings throughout your cruise.

When we were in Honningsvåg, the included excursion took us to Nordkapp, the northernmost point in Europe that offers incredible views.  While we were there, I noticed several buses from another cruise line also there.  I looked up the excursion on that cruise line’s website and it was listed as costing “$$$” (3 dollar signs).   It was the exact same excursion that Viking offers for free with the same stops.

Non Stop Views – If you are looking for a cruise that offers views like you’ve never seen before, than this itinerary is perfect for you. 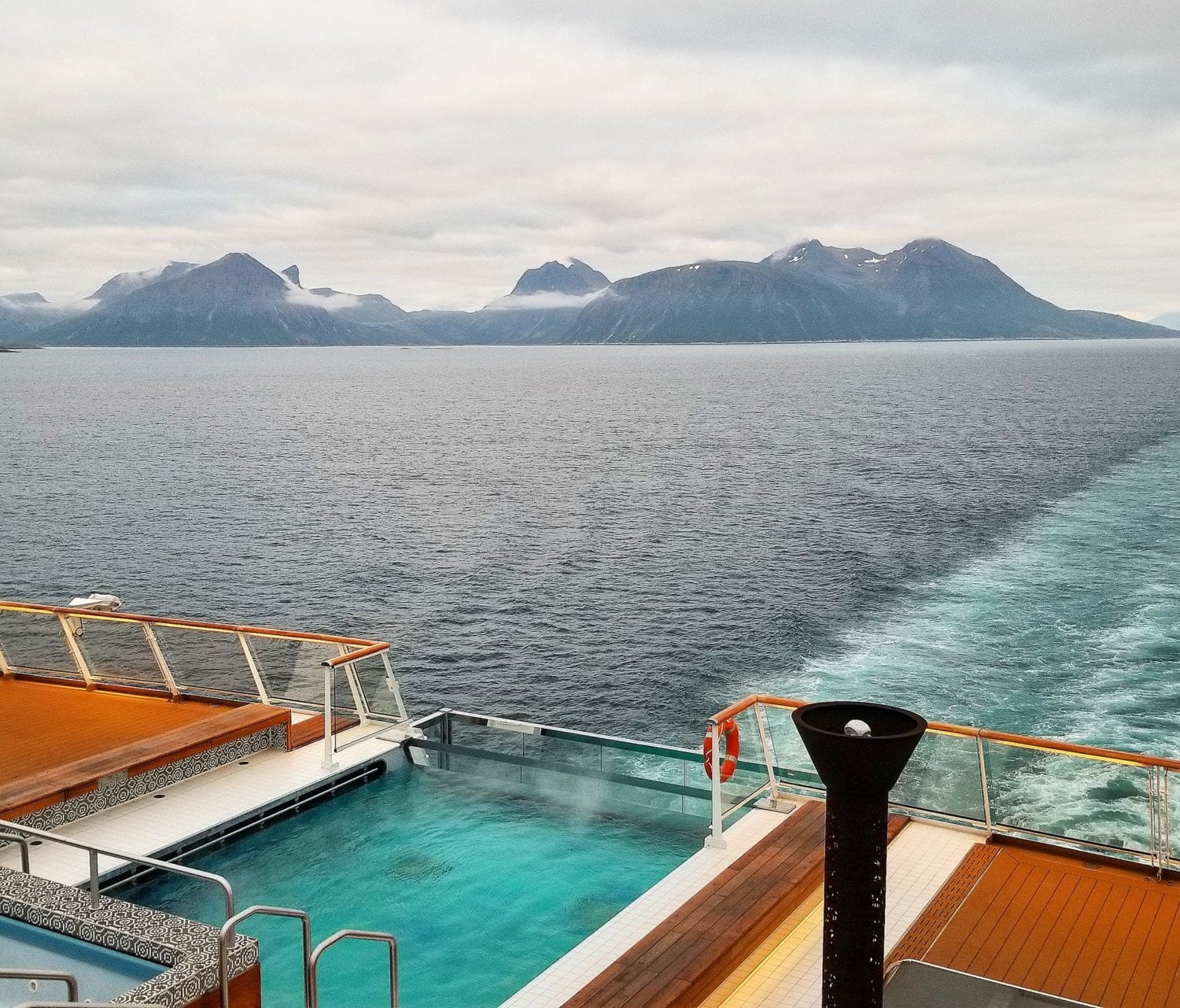 Geiranger – Forget the Caribbean or Alaska, you’d be hard pressed to find a more breathtaking cruise port than Geiranger, Norway.  If there was ever a day when you should wake up early to enjoy the most spectacular views, this is it.

When I woke up that morning, I walked out to my balcony and just a few yards away was an 800 foot waterfall known as Seven Sisters Waterfall.  As you sail between the one thousand foot cliffs on both sides of the fjord, the entrance into Geiranger is something you’ll never forget. Tip: You’ll also want to be out on deck when you leave port, the incredible views last several hours.

Visit North Cape – North Cape (Nordkapp in Norwegian) is the northernmost point in Europe. The plateau sits on top of 1,000 foot cliffs and the views are just incredible. There’s a visitor center with video cinema where you can learn all about the Midnight Sun.  The stop was one of the highlights of our cruise. 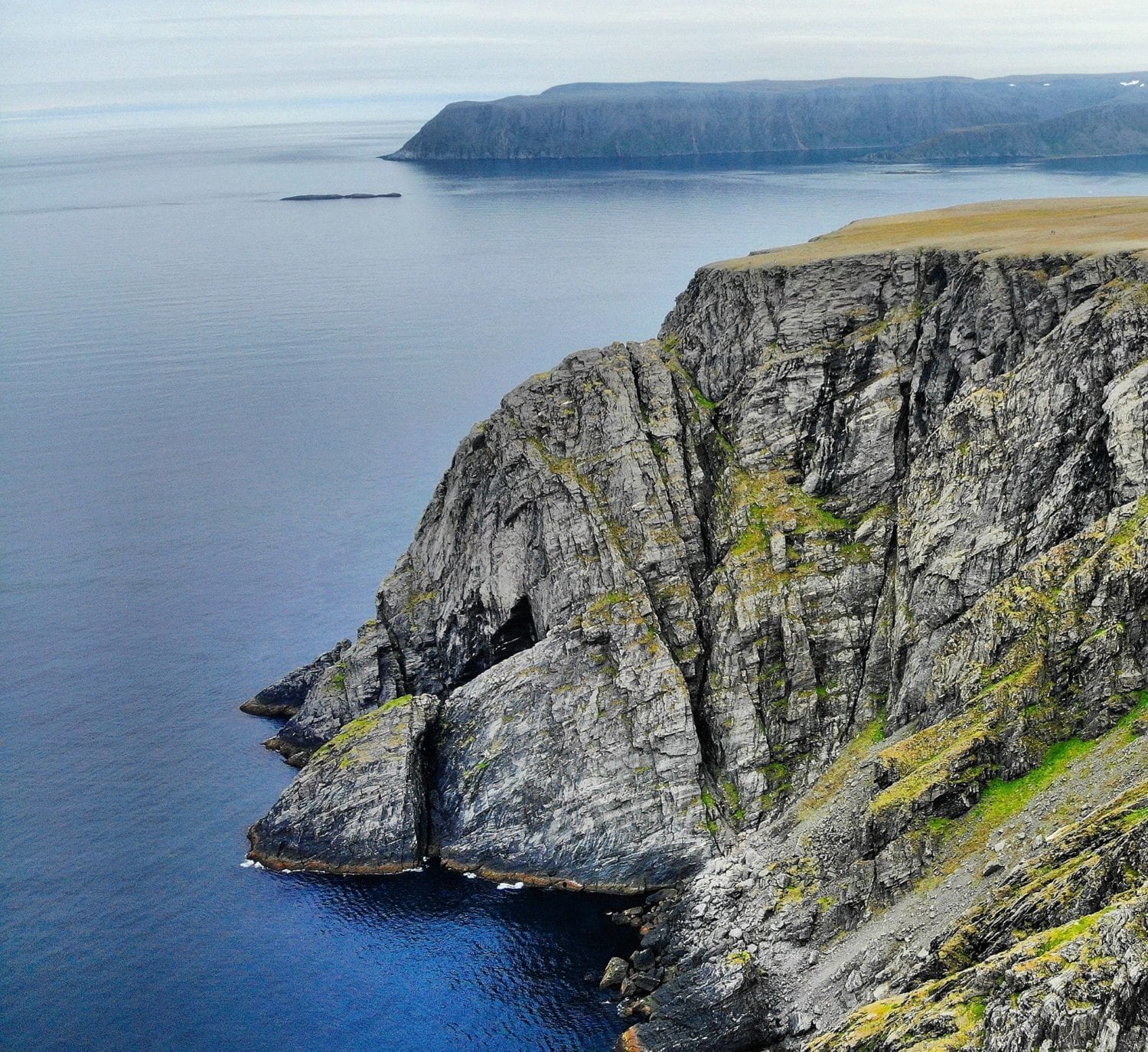 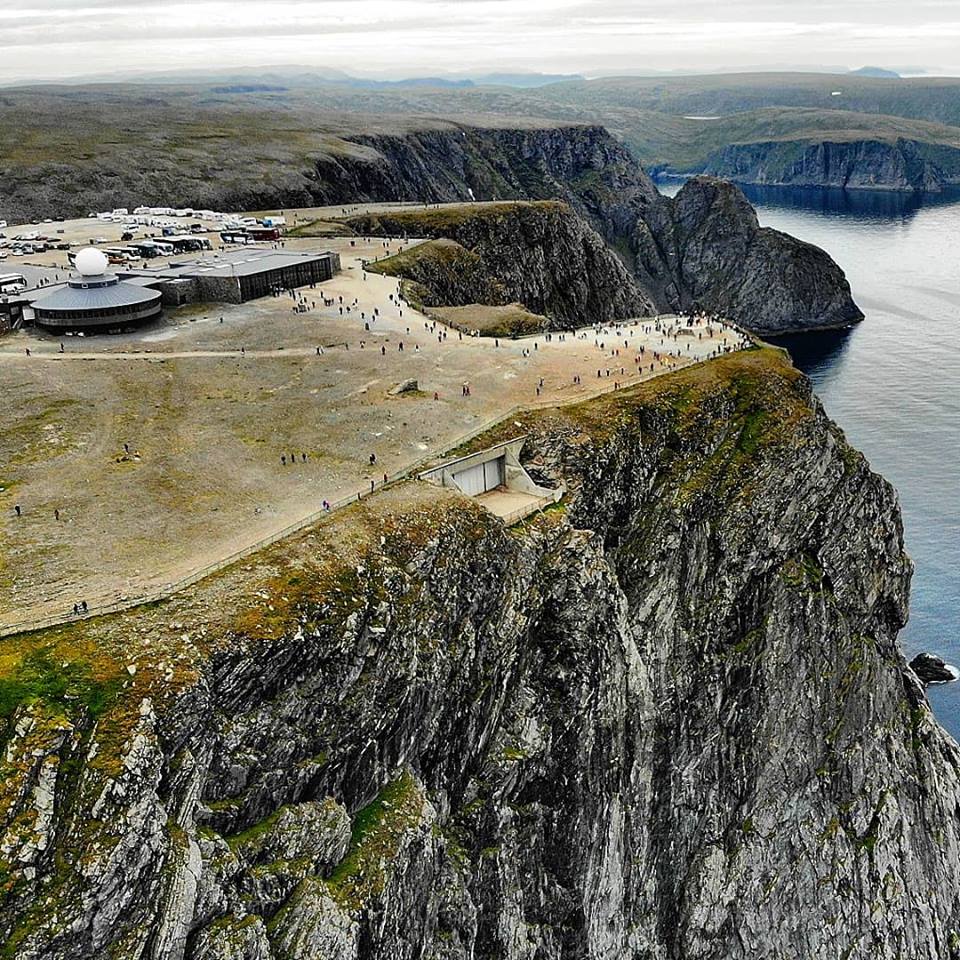 Viking Cruise Ships – Once you sail on a Viking ocean ship, you’ll always want to sail on a Viking ship. The ships offer so many little things that help to greatly enhance your cruise.  Every cabin comes with a private balcony and there are more power outlets in each stateroom than any other ship I’ve been on.  In the day and age of smartphones, smartwatches, digital cameras, and other electronics like tablets that need plugged in, having four power outlets and nine USB outlets in each cabin is a lifesaver.

The bathrooms are particularly awesome, with heated floors, no fog mirrors, and a large shower with glass doors.

Take a Video Tour of our Cruise Ship, Viking Sky

No Nickel and Diming – One of the biggest benefits of taking a Viking cruise is that you aren’t nickel and dimed throughout your cruise.  The following is all included in your cruise fare: WiFi, specialty coffees, specialty dining, room service, thermal suite in the spa, and drinks during meals.  There’s no art auctions, photographers, bingo, or any other of that nonsense.

Plenty of Loungers by the Pool – We’ve all been there, you head up to the pool on a sea day to only find that every single lounger is “reserved”, even though 75% of them are unoccupied.  During our two week cruise, I saw exactly zero loungers reserved.  There were always plenty of loungers by the pool, even if you arrived an hour after breakfast.

Because of the generous space to passenger ratio on the ship (930 max passengers on a 48,000 gross ton ship), you’ll never have a problem finding a place to sit anywhere around the vessel.

Blue Nose Crossing Ceremony – To celebrate the maritime tradition of crossing the Arctic Circle, the Order of the Blue Nose Crossing Ceremony took place on the pool deck.  Passengers who participated in the cold water plunge received a aquavit shot and a blue nose.  This was the only time during the cruise when the pool deck was packed but it was enjoyed by everyone.

Resident Historian Onboard – Each Viking cruise ship features their own resident historian.  Jeremy Paterson was the resident historian on our cruise and was often seen with passengers around the ship discussing history about the areas that we were visiting.

Enrichment Lectures –  What’s the point of traveling around the world if you don’t take time to learn about the places you are visiting?  Many days of the cruise featured enrichment lectures that talked about the history of Vikings, Norway, Ragnarok, Scotland, and the Arctic.

Staff – Last but not least, the staff on Viking ships take great cruises and turn them into trips you’ll never forget.  Read: The Viking Difference Starts with the Crew

Note: I was a guest of Viking Cruises for this sailing but opinions in this article are 100% my own.

Ben Souza
Ben is a world traveler who has visited 42 countries and taken over 50 cruises. His writings have appeared and been cited in various media outlets such as Yahoo News, MSN, NPR, Drudge Report, CNN, Fox, and ABC News. Ben currently resides in Cincinnati, Ohio. Follow Ben on Instagram. Visit Ben Souza on Linkedin. You may email Ben at [email protected]
Opinion16 Reasons to Take the Into the Midnight Sun Cruise on Viking...
Previous article
8 Carnival Cruise Line Cruises You Need to Take
Next article
Carnival Cruise Line Extends $49 Deposit Discount