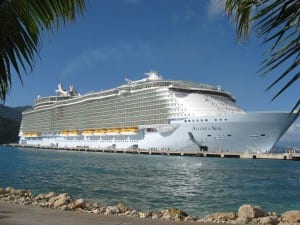 The world’s largest cruise ship, Royal Caribbean’s Allure of the Seas, has been plagued with propulsion problems over the past few weeks. RCCL has not released any details about what is causing the problems, or which of the three Azipod units were affected.

The propulsion problems have slowed the Allure down from its maximum cruising speed of 22.6 knots.  This has caused Royal Caribbean to shorten stops in several ports over the past 3 weeks.

Cynthia Martinez, the director of Global Corporate Communications for RCCL released the following statement: “Allure of the Seas currently has a small restriction on her top speed.  All equipment is fully operational, and there is no impact on the maneuverability of the ship or on the safety of our guests and crew”.

Last week, the Allure of the Seas kept the same itinerary although several ports were cut short to allow the ship to make all of its scheduled stops.  This meant one less hour in Nassau, Bahamas and three less hours in St Thomas, U.S. Virgin Islands.

The 6,000 passenger ship left Ft. Lauderdale on Sunday afternoon (November 3, 2013) for a seven night cruise to the Western Caribbean.   Royal Caribbean has yet to announce the first dry dock for the Allure, although her sister ship the Oasis is scheduled to go into dry dock in 2014.

Rumors have floated around the internet over the past year about problems that the Oasis/Allure of the seas were having with the Azipod units.  This is the first time that Royal Caribbean has admitted to having problems with them.

The Allure of the Seas is currently the largest cruise ship in the world coming in at 225,000 gross tons.  The ship is 1,187 feet long and rises to 236 ft above the water line on 16 passenger decks.

Cruise Fever will continue to monitor the progress of the Allure of the Seas and will update this page as more information comes available.