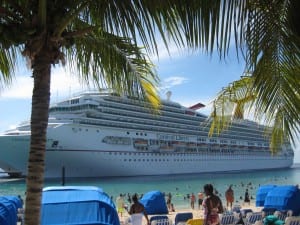 As hurricane season winds down and cold weather begins to settle on northern states, the 2013-2014 Caribbean cruise season is kicking into high gear as cruise lines move cruise ships back to the warm waters of the Caribbean.

While cruise lines have ships that visit the Caribbean year round, they have far more ships sailing there during the winter months.  Ships that were sailing in Europe, Alaska, and New England will now be headed to tropical destinations for the winter.

Over the past week, Norwegian Cruise Line has welcomed the Norwegian Epic, Dawn, Jewel, and Pearl back to the Caribbean.  The Pearl was Norwegian’s sixth ship to return.   In January, Norwegian’s newest cruise ship, the Getaway, will join these six ships giving Caribbean cruisers even more choices to choose from with Freestyle Cruising.

Royal Caribbean’s Independence of the Seas and Liberty of the Seas are currently on trans-Atlantic cruises from Europe and will arrive in Ft Lauderdale in the next week to begin cruises to the Caribbean.   RCCL two largest ships, the Allure and the Oasis, sail year round to the Eastern and Western Caribbean out of Ft. Lauderdale.

Carnival, the largest cruise ship company in the world, has the most year round sailings to the Caribbean.  The newly renovated Carnival Sunshine (formerly the Carnival Destiny), is arriving for the Caribbean cruise season on November 17.  The Sunshine will be sailing out of New Orleans.

Two of the most anticipated new cruise ships for the Caribbean cruise season are the MSC Divina and the Royal Princess.  The 4,000 passenger MSC Divina will be making its debut in Miami on November 20.  MSC is bringing a taste of the Mediterranean for year round cruises out of Miami as MSC tries to grow its small American cruise market share.

The Royal Princess, also a 4,000 passenger ship, is the largest cruise ship in the Princess fleet.  The Royal Princess arrived in Ft Lauderdale a few days ago as the ship will sail to the Caribbean for the next 6 months before heading back to Europe.

Ben Souza
Ben is a world traveler who has visited 40+ countries and taken over 70 cruises. His writings have appeared and been cited in various media outlets such as Yahoo News, MSN, NPR, Drudge Report, CNN, Fox, and ABC News. Ben currently resides in Cincinnati, Ohio. Follow Ben on Instagram. Visit Ben Souza on Linkedin. You may email Ben at [email protected]
Cruise NewsCruise Ships Head to South Florida As Caribbean Season Heats Up
Previous article
Cyber Monday Cruise Deals 2013
Next article
Cozumel Review: One Day at Port Driving Around Cozumel