Cruise lines are not only building larger cruise ships this year, they are also enlarging smaller ships.  One of those smaller ships was cut in half this week at a Fincantieri shipyard in Palermo, Sicily. 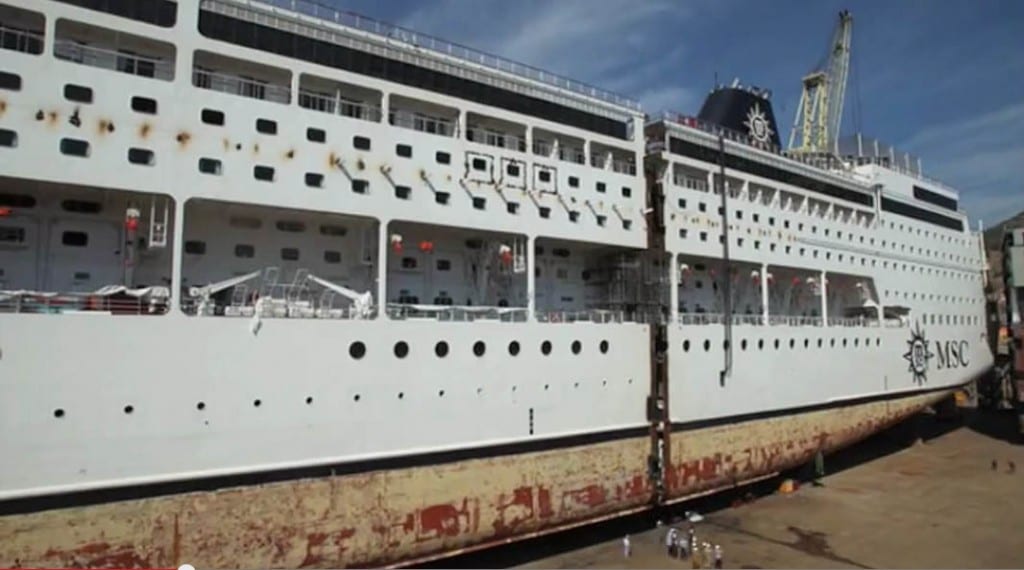 The MSC Armonia, which was built in 2001, is currently the smallest cruise ship in MSC’s fleet at 56,000 gross tons and can carry 2,000 passengers.  The Armonia was cut in half from top to bottom so a prebuilt 79 foot section can be inserted.

This is the first of four overhauls for MSC Cruises as they plan on enlarging 4 cruises ships as part of the Renaissance Program.   The $273 million renovation will enlarge the MSC Opera, MSC Sinfonia, and the MSC Liricia.

The entire process will take 11 weeks and the MSC Armonia is scheduled to resume cruises on November 17.  The expansion will add 193 new cabins, an upgraded spa, expanded restaurant and buffet areas, and a waterpark on the top deck.

Ben Souza
Ben is a world traveler who has visited 42 countries and taken over 50 cruises. His writings have appeared and been cited in various media outlets such as Yahoo News, MSN, NPR, Drudge Report, CNN, Fox, and ABC News. Ben currently resides in Cincinnati, Ohio. Follow Ben on Instagram. Visit Ben Souza on Linkedin. You may email Ben at [email protected]
Cruise News Cruise Ship Cut In Half: 80 Foot Section Added
Previous articleFirst Impressions of the Carnival Breeze: Live from the Ship
Next article7 First Impressions of the Vision of the Seas: Live from the Ship