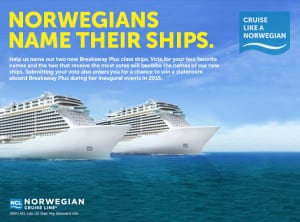 Norwegian Cruise Line is once again asking for help in the naming of two new cruise ships.  The two new ships are part of the Breakaway Plus Class that are set to debut in 2015 and 2017.  Not only can you help name two future cruise ships, but your vote will also enter you in for a chance to win a cruise on one of these new ships for the inaugural events.

The contest is being held on Norwegian’s Facebook Page.  There are 10 choices to choose from and you can choose two different names.  The two names that receive the most votes will be the names of the two Breakaway Plus cruise ships.

This contest is similar to the one that Norwegian Cruise Line held for the first two Breakaway Ships back in 2011.  In that contest, Norwegian asked everyone to submit names on what they could call the ships.  Whichever names that they picked, the person who first submitted the names would win an all inclusive trip on one of them.  (balcony stateroom, round trip airfare, transportation etc)

Out of the thousands of names that were submitted, Norwegian chose the Norwegian Breakaway and the Getaway.  The names were first submitted by Kim Powell and Dennis Hultman.

For this contest, participants much choose from 2 of the following names:

To enter in the contest, visit Norwegian Cruise Line’s Facebook page and click on the “Norwegian Name Their Ships” tab.  Terms and conditions of the contest are also available on their page directly under the “Vote Now” button.  Voting is not available on mobile devices.

The contest is open to legal residents of the 50 United States (including District of Columbia), and Canada (however not in Quebec) who are at least 18 years old at the time of entry.  You are allowed to vote once per day.  The winner will be selected at random on or about October 21, 2013.

What are you waiting for?  Visit Norwegian on Facebook and start voting today, tomorrow, and the next day and hopefully we will see you as the winner of an amazing cruise on one the new state of the art Breakaway Class cruise ships.