Isaac Delays Half a Dozen Cruise Ships From Coming to Florida 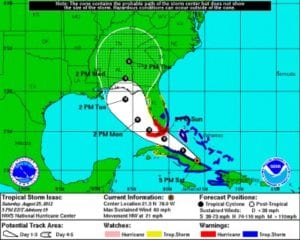 Tropical Storm Isaac is strengthening today as half a dozen cruise ships were scheduled to come back to port today and yesterday.

Cruise passengers that must remain at sea for an extra day or two may be enjoying some extra free food and cruise amenities, but their delay in coming back also has delayed the departure of other cruises as well.

There are at least four cruise ships out of the port of Miami that are being delayed because of the storm including Carnival’s Valor and Imagination, Royal Caribbean’s  Majesty of the Seas, and Norwegian’s Sky.

With the storm tracking northwest the ports are expecting these ships to return sometime today.

The largest cruise ship in the world was also affected by Isaac.  Royal Caribbean’s 5,400 passenger Allure of the Seas, expects to return to its home port of Port Everglades sometime on Tuesday, which is 2 days behind schedule.

The delay for the Allure of the Seas means that the following cruise passengers will only have a 5 day cruise instead of 7, and the ship will skip ports of call in Jamaica and Haiti.

The Carnival Imagination, Norwegian Sky, and Majesty of the Seas will only be a few hours behind schedule and there have been no reports of changes in their itineraries as of yet.

Another half dozen cruise ships have had to alter their courses because of Tropical Storm Isaac, including the Carnival Dream, Carnival Destiny, Carnival Liberty, Carnival Legend and Carnival Ecstasy; Norwegian’s Norwegian Gem; and Royal Caribbean’s Monarch of the Seas.

Isaac is expected to become a category 1 or 2 hurricane by Tuesday as it heads for the gulf coast region of the United States.

We will be keeping a close eye on this storm as it affects the cruise industry and the residents of the gulf coast regions.  If you have any questions about your particular cruise you should go to the cruise lines website to see if any changes have been made in your itinerary.

This is also a good time to consider getting travel insurance for your next vacation.

J. Souza
Jon got hooked on cruising after his first cruise on his honeymoon, and today he is always looking for cruise deals and reading information about the cruise industry. Jon lives in the foothills of North Carolina and wishes there were a cruise port that far inland. Jon can be reached at [email protected]
Cruise News Isaac Delays Half a Dozen Cruise Ships From Coming to Florida
Previous articleTropical Storms Joyce & Isaac Force Cruise Lines to Alter Itineraries
Next articleRidiculous Lawsuits Target Cruise Lines