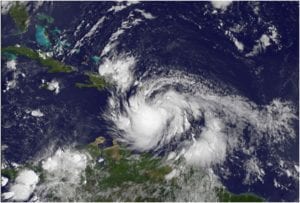 Cruise lines are changing cruise itineraries due to two tropical storms that are currently in the Atlantic Ocean and in the Caribbean.

Tropical Storm Joyce had maximum sustained winds of 35 mph but has weakened into a little more than thundershowers.  The storm is forecasted to turn north towards Bermuda but is not expected to regain strength.

Norwegian Cruise Line has announced a change for the Norwegian Dawn that is departing from Boston on Friday.  The ship will arrive in Bermuda on Sunday at 8 am, 3 hours ahead of schedule.  This change is being made to maximize the passengers time on shore if the Dawn needs to leave Bermuda early due to TS Joyce.

Tropical Storm Isaac currently has maximum sustained winds of 65 mph and is causing several cruise lines to make changes to itineraries.  The storm is located SE of the Florida Keys and is moving NW at 18 mph.   TS Isaac is expected to gain strength as it enters the warm waters of the Gulf after it hits the Florida Keys.  There is a tropical storm warning for Cuba, Jamaica, Grand Cayman, and the Bahamas.  The Florida Keys are under a hurricane warning that is expected to hit early Monday morning.

The Port of Miami closed at 11:00pm Saturday night and will not reopen until Monday, August 27.

Carnival has made the following changes to cruises:

Royal Caribbean has made the following changes for cruises:

Royal Caribbean has asked guests that are sailing on the Allure of the Seas, Majesty of the Seas, and Monarch of the Seas to monitor their website for any additional changes.

Norwegian Cruise Line has made the following changes due to Tropical Storm Issac:

Disney Cruise Line has not made any changes to itineraries for the Fantasy, Magic, and Dream.  They are monitoring the storms and will make any changes that are necessary for the safety of the passengers and crew members.

For the latest on Tropical Storm Isaac and Joyce, visit the National Hurricane Center.

Ben Souza
Ben is a world traveler who has visited 40+ countries and taken over 70 cruises. His writings have appeared and been cited in various media outlets such as Yahoo News, MSN, NPR, Drudge Report, CNN, Fox, and ABC News. Ben currently resides in Cincinnati, Ohio. Follow Ben on Instagram. Visit Ben Souza on Linkedin. You may email Ben at [email protected]
Cruise NewsTropical Storms Joyce & Isaac Force Cruise Lines to Alter Itineraries
Previous article
Traffic Warning for Carnival Cruises out of Tampa August 25-30, 2012
Next article
Isaac Delays Half a Dozen Cruise Ships From Coming to Florida