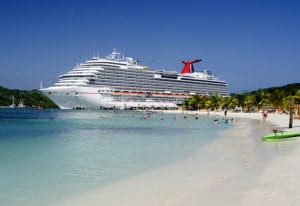 The Miami NewTimes has reported that a passenger is suing Carnival after a “Hairy Man Contest” led to his feet being burned by the surface of the pool deck of the Carnival Legend.  Kurt Gies is seeking damages and medical costs and said that he “lost the value of his cruise vacation”.  He claims that he received severe burns on his feet and got an infection from them, although Carnival has stated that there is no record of a passenger reporting burned feet at the ship’s medical center.

He claims that crew members had towels laying on the Lido Deck but removed them before the contest started.  The combination of hairless foot soles and roasting deck surface led to nasty burns, as well as “serious and permanent scarring, disfigurement, and embarrassment,” the lawsuit claims.

A different passenger has sued P&O Cruises Australia over “cougar” comments at a singing competition.  Kate Strahan took a 10 day South Pacific cruise last November when she entered the “Pop Stars” competition.  After a judge made a comment about her clothing and physical features, she playfully responded that she could call him a cougar anytime.

She has now filed a lawsuit against the cruise line for sexual harassment.  She is asking for over $1 million dollars in damages and made the following statement:  “I could not believe or understand how such a thing could happen. As a mother and a grandmother Rory’s actions were absolutely abhorrent for a man of his age and he should know better as a cruise entertainer.”

P&O Cruises has issued an apology to Ms Strahan and has not renewed Mr Healey’s contract.  They are seeking to have the lawsuit dismissed as the incident happened in international waters where Australian laws do not apply.  They also called the lawsuit excessive.

In May the mother of a 39 year old woman named Angel Holcomb sued Carnival Corp. after her daughter died on a cruise.  The lawsuit states that Carnival was “fostering a party atmosphere” and for failing to properly train its staff.

Angel Holcomb had too much to drink and a relative watched her “stumbling and eventually fall in the hallway because she was intoxicated and wearing heels.”  After she went to the bathroom to get some water, she dropped the glass and a piece of it cut through her left arm severing her ulnar artery.  Her fiance said blood was “spraying everywhere” as he went to help her.

The lawsuits accuses Carnival of not training employees properly in a way to serve alcohol to passengers or to respond to emergencies.  It stated that Carnival allowed guests to become dangerously drunk and to hurt themselves.

Two crew members came to help and brought a canoe instead of a stretcher.  It took an hour to get her in the infirmary and she died 15 minutes later when she went into cardiac arrest.

This lawsuit has the most merit of the 3 since the crew members did seem to not know how to act properly in an emergency.  However, blaming Carnival because someone was too drunk is well, ridiculous.

Cruise Fever would love to hear your opinion on what you think of these lawsuits and if you think they are justifiable.