Royal Caribbean is Raising the Bar with Harmony of the Seas

Royal Caribbean is raising the bar on water parks at sea when Harmony of the Seas makes its debut in the spring of 2016.  The cruise line announced today that the world’s largest cruise ship will feature an interactive water park for kids called Splashaway Bay. 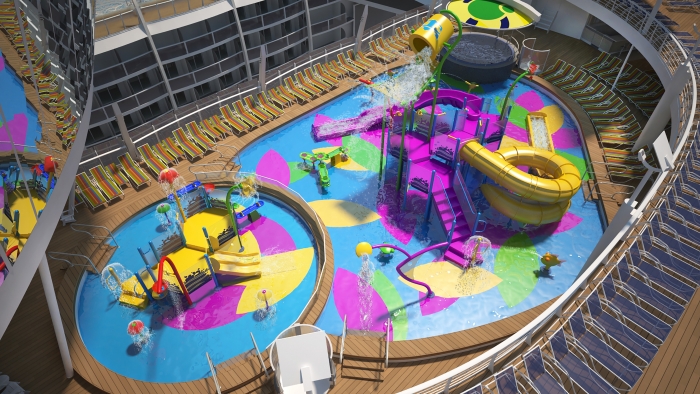 Splashaway Bay will be in addition to the Ultimate Abyss, the tallest slide (will not be a water slide) at sea with a dramatic 100 foot plunge.  A trio of water slides, The Perfect Storm, will make Harmony of the Seas the ultimate vacation experience.

Harmony of the Seas will be the first in a new generation of Oasis class ships where groundbreaking architectural innovations are combined with breakthrough technologies of the Quantum class. The ship will debut in May 2016 for her inaugural summer season showcasing Europe’s most popular cruise destinations on seven-night Western Mediterranean itineraries calling on Barcelona, Palma de Mallorca, Spain; Provence, France; Florence/Pisa, Rome and Naples, Italy. In November 2016, Harmony will arrive to her homeport of Port Everglades in Ft. Lauderdale, Fla. offering seven-night Eastern and Western Caribbean sailings. 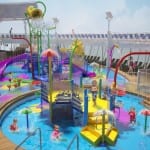 Splashaway Bay will be a vibrant waterscape for kids and toddlers with sea creature water cannons, winding slides, a gigantic drench bucket and a multi-platform jungle-gym to keep everyone entertained for hours. Guests of all ages will get the ultimate heart-pounding thrill ride on the Ultimate Abyss, a 10 story slide that begins in the Pool and Sports Zone at the aft of the ship down to the Boardwalk neighborhood below. Spiraling five decks above the lushly landscaped, open-air Central Park in the center of the ship, water slides Cyclone, Typhoon and Supercell come together as The Perfect Storm, inviting travelers to slide into an incredible adventure. Thrill seekers can test their mettle in Supercell, featuring a champagne bowl swirling guests around as they descend into their approach towards a big splash finale. 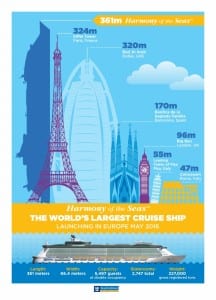 Harmony of the Seas will be home to the seven distinct neighborhoods for which Oasis class of ships is known and feature technological advancements now synonymous with the award-winning cruise line. Revolutionary features include the Bionic Bar dancing robot bartenders on the Royal Promenade; Virtual Balconies in many interior staterooms offering sea and port views; the Royal WOWBands with RFID technology to simplify the guest experience; and VOOM, the fastest internet at sea found exclusively on Royal Caribbean ships. Catering to every craving, Harmony will offer the most dining options at sea, including new specialty restaurants Izumi Hibachi & Sushi, Sabor Taqueria and Tequila Bar, and Wonderland Imaginative Cuisine, a whimsical setting where Royal Caribbean chefs twist their culinary kaleidoscopes.

Ben Souza
Ben, a world traveler who has visited 41 countries, currently takes between 8-10 cruises a year. His writings have appeared and been cited in various media outlets such as Yahoo News, MSN, NPR, Drudge Report, CNN, Fox, and ABC News. Ben currently resides in Cincinnati, Ohio. Follow Ben on Instagram. Visit Ben Souza on Linkedin. You may email Ben at [email protected]
Cruise News Royal Caribbean is Raising the Bar with Harmony of the Seas
Previous articleNorwegian Escape Floated Out of Drydock at Meyer Werft
Next articlePrincess Cruises Adding Family Style Specialty Restaurant

Azamara has unveiled 22 new cruises for the fourth cruise ship that is joining their fleet, Azamara Onward. Scheduled to set sail in spring 2022...
Read more

Royal Caribbean’s First Cruises From Miami Will Have Separate Dining for...