Crystal Cruises has released details of a major expansion that includes three new luxury polar ice-class cruise ships, a luxury yacht, river cruises, and their own 787 airplane.  The cruise ships will have 48 unique homes on the top deck that can be purchased and used as a 2nd home. 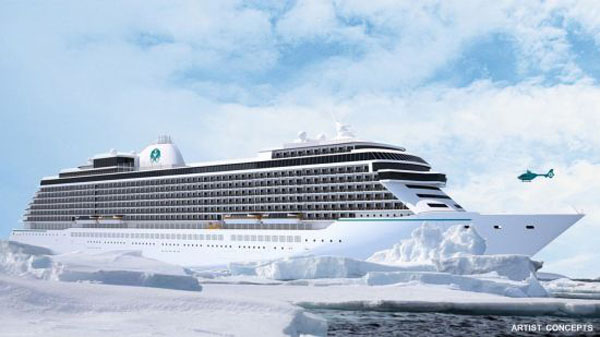 The three cruise ships ordered to be built at Lloyd Werft will be over 100,000 gross tons in size but will hold only 1,000 passengers.  The average space ratio will be an impressive 100 tons per passenger, almost double that of other luxury lines.  In addition, there will be 1,000 crew members giving the ships a passenger/crew ratio of 1:1.

Dreaming of living on a cruise ship? The top deck of each ship will have 48 residences that can be purchased and used as a residence or 2nd home.  They will have their own private restaurant, reception and facilities, and nine foot ceilings.  They will range from 600 square feet to the largest at sea at more than 4,000 square feet.

Every stateroom on the polar ice-class ships will be a suite of at least 400 square feet.  The ships will have the following features: helicopters, rubberized zodiacs for adventuring, and submarines.  The first of the three ships is expected to be completed in 2018.  Each vessel will be designed with polar ice-rated hulls for trips to Antarctica and the Arctic.

Along with these three cruise ships, Crystal will be launching Crystal Luxury Air.  The cruise line plans on converting a Boeing 787 Dreamliner for 28 day tips to 10-12 remote or sought after locations.

The planes will hold only 60 passengers (the planes typically fly with 300 seats) with each seat being a fully reclining business class seat.  Accommodations will be at the finest hotels and destination inspired cuisine will be prepared by celebrity chefs. 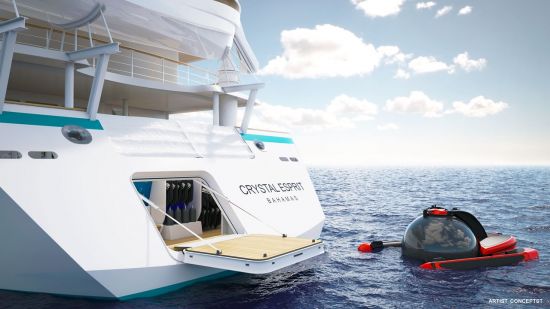 Crystal Esprit will be a new luxury yacht that will hold 62 passengers. This new brand called Crystal Yacht will debut in December 2015.  The yacht will carry a 32 foot boat for adventuring and a two person submarine that will be available for underwater weddings.

There will also be four ten passenger zodiacs that will go along with the 32 passenger tender boat.  Bookings for Crystal Esprit open today for members of Crystal’s frequent cruiser program.

Ben Souza
Ben is a world traveler who has visited 40+ countries and taken over 70 cruises. His writings have appeared and been cited in various media outlets such as Yahoo News, MSN, NPR, Drudge Report, CNN, Fox, and ABC News. Ben currently resides in Cincinnati, Ohio. Follow Ben on Instagram. Visit Ben Souza on Linkedin. You may email Ben at [email protected]
Cruise NewsCabins on New Cruise Ships Can Be Purchased as a 2nd Home
Previous article
Harmony of the Seas Will Feature a Ten-Story Waterslide
Next article
Cruise Line Will Match Loyalty Status from other Cruise Lines