Norwegian Dawn Runs Aground off Bermuda – No Injuries or Damage Reported

Update: 5:00 p.m.: Statement from Norwegian Cruise Line: “On Wednesday, May 20, a thorough assessment of Norwegian Dawn was completed by Norwegian’s technical operations team, an independent dive team, and DNVGL inspectors, representing the ship’s classification society, while the ship was alongside in Heritage Wharf, Bermuda. The team confirmed the structural integrity of the ship and the technical issue which caused the steering malfunction was identified and corrected. The ship is expected to be cleared to depart Bermuda at 3pm today and resume sailing to Boston, and is expected to arrive on Friday as scheduled. Norwegian Dawn’s next voyage will depart as scheduled on May 22.  We sincerely apologize for the inconvenience and greatly appreciate our guests’ understanding. All guests sailing on the current voyage will receive a future cruise credit of 15% of their cruise fare to use towards a future Norwegian cruise.”

Update 6:30 a.m. EST: The Norwegian Dawn has been freed from the reef and was safely anchored offshore for the night.  There are reports of no damage to the ship and all on board services are fully operational.  The ship will be thoroughly inspected by DNVGL before returning to Boston.

Original Article: A cruise ship ran aground this evening after hitting a coral reef after leaving port in Bermuda.  The incident happened at approximately 5:10 p.m. local time when the Norwegian Dawn temporarily lost power which caused the vessel to lose propulsion.  The ship then made contact with the channel bed. 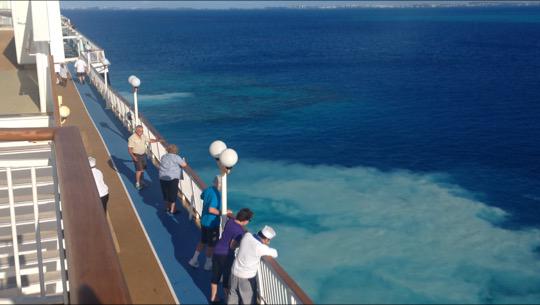 There are no reports of injuries to any of the 3,502 passengers and crew members that are currently on the cruise ship.  The captain has made an announcement that they will not be going anywhere anytime soon as the ship is stuck in the North Channel.  Full power has been restored to the vessel and all systems are running as normal.  There is also no water leaking into the ship and no visible damage.

The Norwegian Dawn is currently on a seven night cruise out of Boston, Massachusetts with a port stop in King’s Wharf, Bermuda.  The incident happened when the ship was leaving King’s Wharf.  A passenger on the Norwegian Dawn posted on Twitter that a small boat has been sent out to check for damage.

Norwegian Cruise Line posted a statement on their website:

On Tuesday, May 19th at approximately 5:00 pm ET, Norwegian Dawn had a temporary malfunction of its steering system, causing the ship to sail slightly off course as the ship was departing Bermuda, resulting in the vessel making contact with the sea bed. All guests and crew are safe and there were absolutely no injuries.

The ship’s officers, engineers and an independent dive team have confirmed the structural integrity of the ship. With high-tide this evening, the ship was floated and moved to a nearby anchorage position where it will remain overnight. The ship will be thoroughly inspected in Bermuda by DNVGL, the ship’s classification society, before returning to Boston. The ship is fully operational with the full complement of onboard services available to guests.

The ship is sailing on a seven-night Boston to Bermuda cruise with 2,443 passengers and 1,059 crew. We will provide additional updates in the morning when more information becomes available.

Cruise Fever will continue to monitor this breaking story and will have all details as they become available.  Photo Credit: @ThatCantB_Right