Several media outlets are reporting that Royal Caribbean’s Rhapsody of the Seas was hit by a rogue wave early yesterday morning. 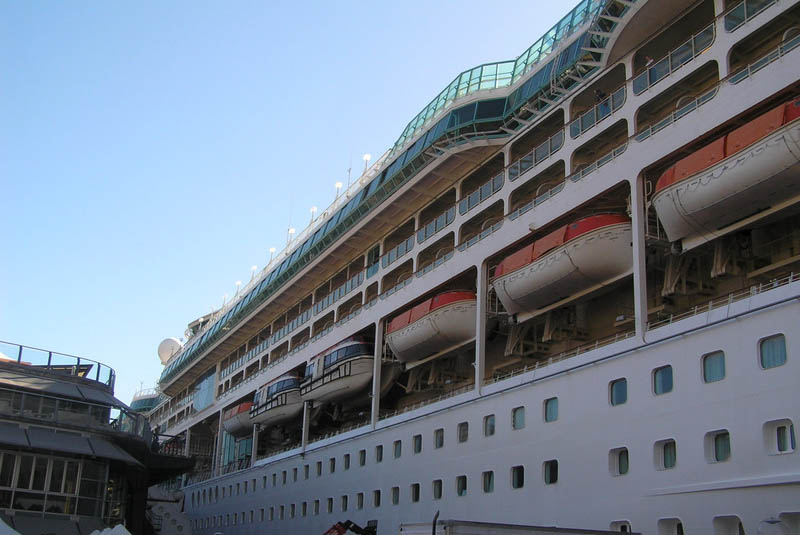 Rhapsody of the Seas was on the first night of a nine night Mediterranean cruise when a rogue wave hit the ship and broke five cabin windows on Deck 3. Six staterooms were damaged and water flooded the hallway and cabins on the deck.  Repairs were made to the ship while the vessel was docked in Ajaccio, Corsica, the first port stop of the cruise.

There were 89 passengers on the cruise affected by the flooding.  Royal Caribbean was able to move 45 guests to different staterooms, but the other 44 passengers had to depart the ship and end their cruise early.  The cruise line paid for all airfare and hotel costs for the passengers who had to leave the ship.

Royal Caribbean is taking care of the passengers who were affected by giving them a full refund and a future cruise certificate for 100% of the cruise fare that they paid for the current cruise.  There are no reported injuries.

Rhapsody of the Seas remained in port for an extra six hours in Ajaccio so the windows that were damaged could be replaced.  All other port stops are expected to be made on schedule.

Rhapsody of the Seas is a 78,000 gross ton, 2,435 passenger cruise ship that entered service in May 1997.  The ship is currently on a nine night cruise from Barcelona, Spain to Venice, Italy with port stops in Ajaccio, Naples, Messina, La Valletta, Kotor, and Ravenna.

Ben Souza
Ben is a world traveler who has visited 42 countries and taken over 50 cruises. His writings have appeared and been cited in various media outlets such as Yahoo News, MSN, NPR, Drudge Report, CNN, Fox, and ABC News. Ben currently resides in Cincinnati, Ohio. Follow Ben on Instagram. Visit Ben Souza on Linkedin. You may email Ben at [email protected]
Cruise NewsRoyal Caribbean Gives Full Refund and Credit to Passengers Affected by Rogue...
Previous article
Carnival Reduces Deposits to $50 Per Person For the Rest of April
Next article
Dramatic Footage of Couple Pleading at the Pier as Cruise Ship Departs with Kids On Board