While the whole purpose of cruising is to be able to totally relax and lose track of time, punctuality is never more important than when you’re a cruise passenger exploring a port. 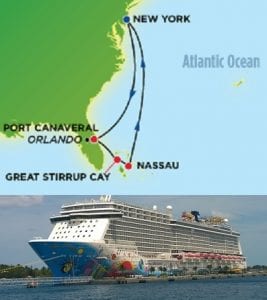 A mother and father looked on helplessly from the dock as their cruise ship left Nassau to head back to New York.  However, their children were still on board the ship.  The dramatic moment was caught on tape as the mother was seen pleading on her knees for the ship to wait for them, but by then it was too late.

The Norwegian Breakaway was on a 7 day voyage to the Bahamas and the couple was late getting back on the ship as it was about to head home to the Big Apple.

The ship’s captain had already waited beyond the allotted time, and an extra half hour was given to the couple.

In the video below you can see the wife on her knees begging the ship to come back.

For some reason the family had split up and the father and children were back on the ship waiting for the mother to return.  But she was still somewhere in Nassau.

So the father brought his travel documents with him as he searched for his wife but realized he might not make it back in time.

The children, a boy (9) and a girl (12) were supervised by crew members while the father frantically looked for his wife.

Cruise passengers watched as a buggy drove down the dock to attempt to help the parents make it back on the ship, but the Breakaway had already “broken away” and was headed home.

In the video you can hear cruise passengers in disbelief that the ship would leave the couple at port with their children still on board, but the ship had already gone well beyond protocol to try to reunite the family.

Passengers are always told to be back on the ship at least an hour before the ship ever leaves port, but from time to time we still see “pier runners” trying to make a last second sprint to their floating vacation.

According to reports from Daily Mail, there was an uncle on the ship that helped take care of the children on the 3 day sailing back to New York.

During Norwegian Breakaway’s seven-night Bahamas cruise from New York that departed on April 17, one female guest did not return to the vessel by the widely communicated scheduled all aboard time of 5:30pm during the ship’s call in Nassau, Bahamas, on April 21.

‘The onboard team located her husband and children on board but the family was not able to reach her nor did they know when she would be returning.

‘Due to the circumstances, the ship went beyond normal protocol and waited alongside an additional half an hour for the guest. When she had still not returned and following consultation with the family, it was decided that the husband would disembark with their travel documents to wait for his wife while the children would stay with their uncle and his family on the ship for the remainder of the voyage.

‘The company offered travel and lodging assistance to the couple and arrangements were made for them to reunite with the ship upon her return to New York on April 24.

Frieden wrote on YouTube: ‘We saw several people running late and started taping. This couple was the latest and we later found out that their kids were not with them on shore, but on the boat with relatives.

‘We followed up with the crew and they said they were all safe. We really were hoping they made it or they turned around for them. Posting this so others can see how important is to be back to the ship on time. Just terrible.’

Some reports are saying that the wife was on a land excursion, but that is still not clear.  The news of the parents being left behind was met with mixed views from cruise passengers on board with some saying the ship should have turned around and others being less sympathetic saying that the ship tells you over and over again to be back on time.

What is your take?  Leave a comment below and let us know.

J. Souza
Jon got hooked on cruising after his first cruise on his honeymoon, and today he is always looking for cruise deals and reading information about the cruise industry. Jon lives in the foothills of North Carolina and wishes there were a cruise port that far inland. Jon can be reached at [email protected]
VideosDramatic Footage of Couple Pleading at the Pier as Cruise Ship Departs...
Previous article
Royal Caribbean Gives Full Refund and Credit to Passengers Affected by Rogue Wave
Next article
10 Reasons Why You Should Take a Cruise on Fathom

10 Worst Cabins on Cruises: How to Avoid Bad Staterooms

10 Worst Cabins on Cruises: How to Avoid Bad Staterooms