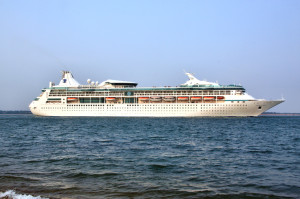 Royal Caribbean’s Vision of the Seas had a small norovirus outbreak on their 11 night cruise that just ended in Ft Lauderdale, Florida.   Out of the 2,700 passengers and crew members on board, a total of 108 caught the gastrointestinal illness.

The cruise ship was given a special cleaning and departed as scheduled for its current cruise. The last port of call before the Vision returned to port in Florida was in Aruba.

While certain news outlets are calling this the latest black eye for the cruise industry, this wouldn’t even make news if the cruise lines wasn’t required to report the outbreak.  Anytime 2% or more of those on board develop a gastrointestinal illness, it is required that the U.S. Centers for Disease Control be notified.

Sicknesses such as the norovirus are easily spread on cruise ships due to the close proximity of the passengers and crew members.  The norovirus also spreads quickly in schools and dorm rooms.

Out of the thousands of cruises in 2012, there were 16 reported outbreaks of the norovirus.

If you are going on a cruise soon and worried about catching a sickness such as the norovirus, remember to wash your hands often.  While all cruise ships have plenty of hand sanitizer around the ship, washing your hands is the best way to fight germs.  If you are on a sailing where an outbreak happens, stay away from the buffet where germs are easily spread.

Before you go and cancel your cruise because of the news headlines in the past month (Carnival Triumph incident and now this outbreak), remember that over 21 million people are affected by the norovirus each year.  One in 17 Americans will come down with this illness sometime this year.  The cruise industry outbreak average?  Less than half of one percent of all cruises taken each year..