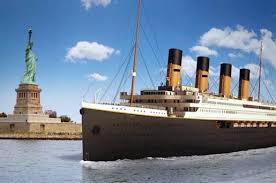 Construction is about to begin on a real life replica of the original Titanic cruise ship.  A spokesperson for the replica of the sunken ship involved in the most famous maritime disaster has said that this new ship will be the safest cruise ship in the world.   This might seem like a temptation of fate, but some supporters think this.

Australian billionaire, Clive Palmer, is the one funding the project, and he unveiled the blueprints for the building of the second Titanic at the air and space museum in New York, NY.  Construction is set to start soon in China.

The ship will take the same course as the original Titanic, from Southampton, England to New York.  The story of the Titanic has always been one that draws a lot of intrigue, and over 40,000 people have already expressed interest in obtaining tickets for this repeat voyage.

Palmer stated, “We all live on this planet, we all breathe the same air and, of course, the Titanic is about the things we’ve got in common,” he said. “It links three continents.”

The original ship was powered by coal, and even though the new Titanic will be diesel powered it will still have the 4 iconic smoke stacks.  It’s ironic because the billionaire who is funding the project made his fortune in real estate and the coal industry.

Cruisers will also be wearing clothing similar to the time period of the Titanic, and the dining rooms will be modeled meticulously after the original, with passengers eating food from the same menu as the ill-fated ship.

But not everything on the new ship will be the same as the original.  State of the art life boats and safety features played a huge role in the design, with safety chutes and slides.  Passengers can also enjoy the modern convenience of air conditioning

The second Titanic is scheduled to set sail in 2016 if everything goes as planned.

When asked about why he is spending so much money on this project, Palmer replied, “I want to spend the money I’ve got before I die,” he said. “You might as well spend it, not leave it to the kids to spend, there will be enough left for them anyway.”

More than 2,200 people were on board the Titanic when it sunk, but only 700 survived because of a lack of lifeboats among other problems.   Since then many improvements have been made to keep passengers safe.

What do you think?  Would you want to take a cruise on this ship?  Let us know.

J. Souza
Jon got hooked on cruising after his first cruise on his honeymoon, and today he is always looking for cruise deals and reading information about the cruise industry. Jon lives in the foothills of North Carolina and wishes there were a cruise port that far inland. Jon can be reached at [email protected]
Cruise NewsTitanic II Replica Cruise Ship to Sail Maiden Voyage in 2016
Previous article
Media Turns the Carnival Triumph Incident Into a Circus
Next article
Norovirus Hits Royal Caribbean Cruise Ship