Cause of Fire in Carnival Triumph Engine Room Revealed 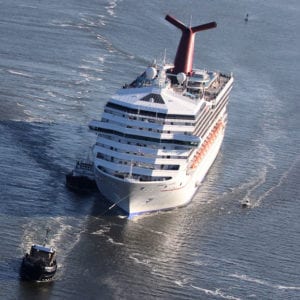 The Coast Guard announced today that the cause of the fire that crippled the Carnival Triumph for several days at sea was a leaky fuel oil return line.  Oil started spraying out of the fuel line and then the oil caught fire once it hit a hot surface.  The crews tried to contain the fire right away, but because of the heat of the fire the room had to be closed off until the suppression system put it out.

Lt. Cmdr. Teresa Hatfield, head of the U.S. Coast Guard Marine Casualty Investigation Team, declined to answer questions as to when the fuel lines were last inspected and why the damage was so severe, saying that investigations were ongoing.

The Coast Guard was on the scene as the powerless cruise ship was pulled into port on Thursday, and they have been interviewing passengers and crew.    The onsite side of the investigation should be finished by the end of the week.

There are three generators in the room where the fire broke out, and there is another room with 3 more generators where the fire did not reach.  The Carnival Triumph was having propulsion problems on one of the generators back in January, but investigators say that it cannot yet be determined if that generator and the recent fire were linked in some way.

Investigators are still trying to determine why the fire disabled the entire propulsion system of the ship.

Carnival has canceled the next 12 or more cruises on board the Triumph so they can investigate what caused the problem and clean everything up on the ship.  The ship lost propulsion and its main power source on the 3rd day of the 4 day cruise, leaving cruisers to stand in long lines for food and sleeping outside to keep cool from the lack of air circulation.

J. Souza
Jon got hooked on cruising after his first cruise on his honeymoon, and today he is always looking for cruise deals and reading information about the cruise industry. Jon lives in the foothills of North Carolina and wishes there were a cruise port that far inland. Jon can be reached at [email protected]
Cruise NewsCause of Fire in Carnival Triumph Engine Room Revealed
Previous article
How to Prepare for a Cruise Ship Losing Power like on Carnival Triumph
Next article
Media Turns the Carnival Triumph Incident Into a Circus