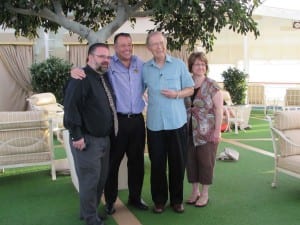 Bernie Kopell received a lifetime achievement award onboard the Ruby Princess cruise ship on February 14, 2014.  Kopell is currently onboard the ship for ‘Cruising for a Cause’ which is raising money and awareness for the American Heart Association.

Kopell is known for the role he played as Dr. Adam Bricker on the Love Boat.  The popular show ran for 10 season and was aired in 98 countries.  He is now a celebrity ambassador for Princess Cruises.

The award was given to Kopell by Barry and Terri Vaudrin of Cruising Authority to recognize all that Bernie has done for the amazing growth of the cruise industry since the 1970s.

However, Kopell would take not all the credit for the growth of the cruise industry.  He was quick to also name the other cast members of the show and said that they had an equal part in the success.  As he pointed out, they were a free commercial for the cruise lines every time an episode of the Love Boat aired.  The show was filmed in studio and onboard the Pacific Princess.

The award was given to Kopell in the Sanctuary of the Ruby Princess on the 4th day of ‘Cruising for a Cause‘.  Princess Cruises is donating a portion of each passenger’s cruise fare to the American Heart Association.  The cruise line is also giving a dollar for dollar match as they try and do their part in heart disease awareness.

Kopell is not the only celebrity on board for this special 5 night cruise to the Caribbean.  Four time Super Bowl champion Jesse Sapolu, Chef Marc Anthony Bynum, David and Karen Gamow, Kathy Magliato, Ary Nunez, and Diana Wentworth have also been brought onboard by Princess.

The ‘Cruising for a Cause’ concludes on February 15, 2014 when the Ruby Princess arrives back in Ft. Lauderdale, Florida. The Ruby Princess, launched in November 2008, is the 2nd largest cruise ship operated by Princess.

Ben Souza
Ben is a world traveler who has visited 42 countries and taken over 50 cruises. His writings have appeared and been cited in various media outlets such as Yahoo News, MSN, NPR, Drudge Report, CNN, Fox, and ABC News. Ben currently resides in Cincinnati, Ohio. Follow Ben on Instagram. Visit Ben Souza on Linkedin. You may email Ben at [email protected]
Cruise NewsBernie Kopell Receives Lifetime Achievement Award
Previous article
Princess Cruises Kicks off Sailing for Heart Health
Next article
Cruise For Heart Health Wraps Up On The Ruby Princess