Cruise For Heart Health Wraps Up On The Ruby Princess 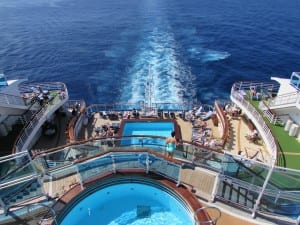 After a successful and informative day 1 on “Cruising for a Cause: Princess Has Heart”, the passengers onboard the Ruby Princess enjoyed two beautiful, sunny days in the ports of Grand Cayman and Cozumel, Mexico.

This special five night cruise was hosted by Princess Cruises and the cruise line donated a portion of each passenger’s cruise fare to the American Heart Association. Alvin Royse, the chairman-elect of the AHA, was onboard for this sailing as well as a host of well known speakers and celebrities.

Bernie Kopell, an ambassador for Princess Cruises who is most known for his role as Dr. Adam Bricker in the hit show The Love Boat, delighted the audience when he talked about the hit TV show and the role that it played in the growth of the cruise industry.

Kopell didn’t show his age one bit as his wit and humor throughout the cruise entertained everyone he came in contact with.  After telling stories about The Love Boat, he took time for a Q & A session with the passengers onboard the cruise.  The following day, Kopell received a lifetime achievement award in recognition of what he has done for the cruise industry. 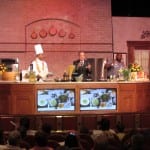 The seminars and activities for heart health picked back up on the last sea day when the executive chef onboard and celebrity chef Marc Anthony Bynum put on a cooking demonstration similar to the one that he did on the first day.  A few of the tips and nuggets of wisdom that were given were: 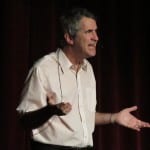 David and Karen Gamow are founders of Clarity Seminars and he is author of the Book, “Breaking the Cycle of Stress”.  Karen started the session off with a guided meditation practice.  She combined relaxation, equal measured breathing, and watching the breath to show exactly how it is done.  Everyone in the audience received a CD of the session as well as instruction pamphlet.

One of the best points that David Gamow stressed is that you should never speak in order to relieve stress.  Clients of the Gamows include NASA, the U.S. Government, CBS, Westin Hotels, and Stanford University. 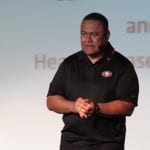 Jesse Sapolu, one of 6 NFL players to win 4 Super Bowls, was the final speaker for the cruise.  He talked about his dangerous heart condition and his 2 heart surgeries.   He played his entire 15 year career for the San Francisco 49ers.

He opened up his Q & A session with the following statement:

I would be happy to answer any of your questions.  But if you are a Cleveland Browns fan and just need a hug, go ahead and come up on stage.

He took many questions regarding the NFL and was asked who was the better QB, Joe Montana or Steve Young.  His answer? Joe Montana.  He said that the NFL has changed since he was a player and the stats that players are putting up today are inflated due to the new rules that have been put in place.

Sapolu was even asked if he ever hiked the football over the QB’s head like what had happened in this year’s Super Bowl.  He said that he never did that to a QB but did hike it over the punter’s head in his career. 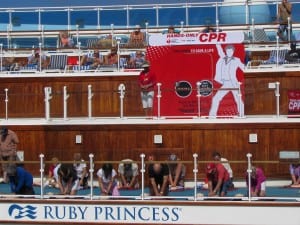 After the seminars were over, a “Hands-Only CPR” training took place on the pool deck.  Passengers were taught the basics of Hands-Only CPR.  Step 1 is to call 911.  Step 2 is to push hard and fast in the center of the chest.  Each push should be to the beat of the Bees Gees hit song, Stayin’ Alive.

This event was done twice during the cruise and had a large group of participants around the pool deck each time.  One passenger from Canada said that he took this cruise without knowing about the event for the American Heart Association. He told Cruise Fever that he took the Hands-Only CPR training so he could save someone’s life if he needed to.

This is the second “Cruising for a Cause” that Princess Cruises has held onboard one of their cruise ships. The first raised $600,000 for Operation Homefront and the Vietnam Veterans Memorial Fund.  The cruise line is looking to make a difference with these special cruises where they not only donate a portion of each cruiser’s fare to charity, but they give a matching contribution as well.