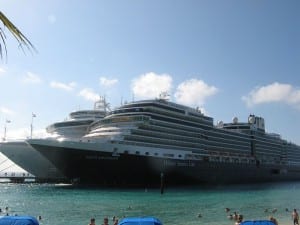 A worker on a Holland America cruise ship is accused of raping a passenger on the MS Nieuw Amsterdam and attempting to throw her overboard according to several news sources including Fox News, CNN, and the Sun-Sentinel.

The worker, 28 year old Indonesian Ketut Pujayasa, was arrested on Sunday morning when the cruise ship arrived back in Port Everglades in Ft. Lauderdale, Florida.  Pujayasa admitted to authorities that he raped a passenger, a 31 year old U.S. woman whose name is being withheld at this time.

The incident began on the Bare Necessities cruise when the room service attendant felt that the woman had disrespected him. He used his company master key to gain access to her cabin and waited on her balcony for her to return that night.

When she returned, he raped, beat, punched, and tried to strangle her.  He then tried to throw her overboard off the coast of Roatan, Honduras.  The attack stopped when another passenger heard the struggle between the two and began to knock on the cabin door.  Pujayasa escaped by jumping from balcony to balcony before entering into another room and into the ship.

When Pujayasa returned to his stateroom, he told his roommate that he tried to kill a passenger and to contact security.  He was quickly detained and held until the ship returned home to Ft. Lauderdale.

The woman was flown by air ambulance to a hospital in South Florida to be treated for her severe injuries.  The cruise line is flying her family to South Florida so they can be with her as she receives medical treatment.

Holland America Line’s CEO, Stein Kruse gave the following statement: “At Holland America Line, the safety of our guests is our highest priority, and we are shocked and deeply saddened by this incident. To our knowledge, no incident like this has occurred in our company’s 140-year history.”

Cruise Fever will continue to follow this breaking story and will update this page as more information becomes available.