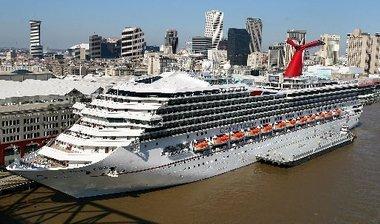 A spokesperson for Carnival has stated the company has booked over 1,500 hotel rooms in Mobile, Alabama and New Orleans, as the Carnival Triumph plans to arrive in port on Thursday.  This many rooms means fewer rooms for those celebrating Mardi Gras in the area which began on Tuesday.

Over 20 charter flights have also been booked for passengers aboard the crippled cruise ship, and these flights are scheduled to take place on Friday.  The weary cruisers will fly to Houston and then be bused to Galveston where their cruise trip began.

A press conference was held yesterday with the general manager of the Mobile cruise terminal, Sheila Gurganus.  Gurganus stated that although the terminal was not used for cruise ships last year preparations are being made to make the terminal fully operational for the large cruise ship and ensure everyone’s security.

The Carnival Elation was the last Carnival ship to call Mobile home, and the Triumph is about 40 feet longer.  When asked about the port’s ability to handle over 4,000 people coming in to the port on the cruise ship, Gurganus responded,

“I don’t think we’ll have a problem with it. I’ve had an offer from Mobile Infirmary Health Services. They called and graciously offered to put a triage unit in here in case someone comes off and needs health services. I think that is an excellent idea. For every cruise we’ve had here, I’ve had at least 2 EMT’s here on staff. I believe you are not talking but about 300 more passengers we’ve had on one of our heaviest cruises. I don’t think it’s difficult to do.”

For anyone needing medical attention there will be personnel in place to handle it, and there will be about 100 extra security personnel to make sure everything runs smoothly.

Currently there are 2 tug boats pulling in the disabled ship.  But even if the ship arrives on Wednesday night, it will not be able to pull into port in the dark and passengers will have to wait until Thursday morning.

Gurganus: “It has to be brought in during the daylight. You can’t tow a vessel like that with that many passengers in it during the dark.”

Carnival and the port at Mobile, Alabama are not strangers.  For 80 years the cruise line operated out of Mobile before moving their ship to New Orleans.  The port’s CEO stated that they are glad to be able to help the cruise line again with any needs they may have, stating:

“It’s not a matter of making a good point to them.. It’s not about money, it’s not a pat me on the back…it’s about the passengers, that’s what it’s about…and yes, we can take care of 300 more passengers than we have in the past.”

J. Souza
Jon got hooked on cruising after his first cruise on his honeymoon, and today he is always looking for cruise deals and reading information about the cruise industry. Jon lives in the foothills of North Carolina and wishes there were a cruise port that far inland. Jon can be reached at [email protected]
Cruise NewsMobile Port Readies for Arrival of Crippled Cruise Ship
Previous article
Life On Board Disabled Cruise Ship Deteriorates
Next article
Will the Carnival Triumph Incident Affect Cruise Bookings?