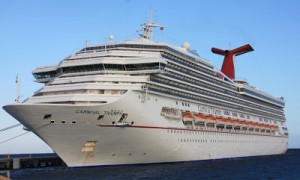 This past Sunday, a fire broke out in the aft engine room of the Carnival Triumph cruise ship.  The fire was quickly contained and there were no injuries or causalities.  However, the fire caused the ship to lose propulsion, causing it to run on emergency power while drifting in the Gulf of Mexico.

Carnival issued a statement on Carnival.com saying that public and cabin restroom are operational in certain areas of the ship.  The statement also said that hot coffee and some hot food service was available in the Lido dining area.

Doesn’t seem so bad, does it?  Who wouldn’t want to spend a few extra days on a cruise ship in the warm waters of the Gulf of Mexico?

However, there have been conflicting reports about the true conditions on board the Triumph made by family and friends of passengers that are currently stuck on the stranded cruise ship.  When the Carnival Elation and Legend made an emergency stop to drop off food and beverages for the passengers and crew, it gave those on board a chance to use the Elation’s and Legend’s cell phone towers to call and text home.

Statements made on Carnival’s Facebook wall by family and friends that received phone calls and text messages paint a much different picture of life on board the Triumph.  Since there is no air conditioning on the ship, cabins that do not have a balcony are uninhabitable due to lack of ventilation.  Some Passengers are making makeshift tents and sleeping on the outside decks of the ship.  Passengers are also sleeping in the theater or anywhere they can find a comfortable spot to get some rest.

Before the ship was able to get some bathroom facilities operational, passengers had to use red bags for their human waste.  While there was one report of sewage running down walls, Cruise Fever was unable to verify that at the time of press.  However, due to having only a few toilets working, there are long lines to use them.

The ship stopped serving alcohol after the fire.  Carnival is providing water for the passengers and crew members.  Reports coming in from the ship are longs lines for food.  One man said he had to wait hours in line for a hamburger.  Other reports were that most of the food being served was salad and fruit.  One passenger sent a text message saying that they were served an onion and cucumber sandwich for dinner.

Without air conditional, proper ventilation, and few working toilets, the ship has begun to develop a strong smell.  Most have described the ship has having pretty poor conditions with one person describing it as similar to living in Somalia.   The conditions will no doubt grow worse unless they can get more than 40% of the power back on the ship.

The Triumph is now being pulled by tug boat to Mobile, Alabama where it is scheduled to dock sometime Thursday evening.  When passengers are able to disembark in Mobile, we will be able to find what the life on the Triumph was really like.

There really isn’t much that Carnival Cruise Lines can do at this point.  While there have been many that have wondered why Carnival doesn’t just send an empty cruise ship to the Gulf of Mexico to rescue everyone. Carnival does not have spare ships just laying around.  Virtually every ship that they have sails full each week.

It is far too dangerous for passengers or crew members to transfer from one ship to another in open waters.  There are many ports such as Grand Cayman that require tendering.  These ports are often canceled when weather makes it unsafe to tender.  The ships are anchored when tendering takes place and would be near impossible in open waters.

Cruise Fever will continue to monitor this developing story and update this page as more information becomes available.

Ben Souza
Ben is a world traveler who has visited 42 countries and taken over 50 cruises. His writings have appeared and been cited in various media outlets such as Yahoo News, MSN, NPR, Drudge Report, CNN, Fox, and ABC News. Ben currently resides in Cincinnati, Ohio. Follow Ben on Instagram. Visit Ben Souza on Linkedin. You may email Ben at [email protected]
Opinion Life On Board Disabled Cruise Ship Deteriorates
Previous articleConditions Aboard Carnival Triumph as it Gets Towed to Mobile, Alabama
Next articleMobile Port Readies for Arrival of Crippled Cruise Ship