Conditions Aboard Carnival Triumph as it Gets Towed to Mobile, Alabama 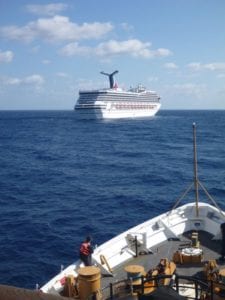 The Carnival Triumph is now being towed back to land after being stranded at sea for 2 days 150 miles off the coast of Mexico after an engine fire left the ship powerless at sea.  Originally the ship was going to be towed back to Texas, but after drifting 90 miles north on its own, the decision was made to tow the ship to Mobile, Alabama.

According to Carnival, the next two cruises with this ship have been canceled so the company can fix the engine and get things cleaned up.

Conditions on the ship have been somewhat miserable, with power from a backup generator only going to power the elevators and to keep food warm.  According to reports from some of the passengers, for some time there was no running water available and passengers were given little red bags.   There was a stench in the air and not having any air circulation in the rooms made things more uncomfortable and unpleasant.

Because of the heat and lack of air circulation in the rooms some of the passengers have been sleeping in tents on the decks and some in the hallways.

Some of the Triumphs 3000 passengers were getting sick as well.  Some of this has been due to the ship’s stabilizers not being operational, and for some time the ship was listing slightly to one side, although reports have stated that the ship is upright again.  The Triumph would certainly face more rocking since it is powerless in the water.

Food has also become a problem aboard the crippled ship.  Some have sent text messages reporting of people hoarding food, and others have mentioned the long lines just to get food.  And since the ship will not arrive in port until Thursday, some of the passengers are fearing that conditions will only get worse.

The coastguard has already delivered several loads of food and supplies for the ship and has reported that the fresh water system and some of the ship’s sewage system was operational as of Monday.

Another cruise ship, the Carnival Legend has aided the Triumph with some supplies as well.  This brief visit allowed for some of the cruise passengers to get a cell signal from the sister ship and send out texts and tweets about conditions aboard the ship.

Carnival’s CEO, Gerry Cahill, has promised a less complicated re-entry for passengers without passports so people can get off the ship as efficiently as possible.

If you have any more information about this ship or the people aboard it, feel free to leave a comment or let us know.  We know this is a difficult time for the cruisers aboard the Triumph and we pray for their swift return.

J. Souza
Jon got hooked on cruising after his first cruise on his honeymoon, and today he is always looking for cruise deals and reading information about the cruise industry. Jon lives in the foothills of North Carolina and wishes there were a cruise port that far inland. Jon can be reached at [email protected]
Cruise NewsConditions Aboard Carnival Triumph as it Gets Towed to Mobile, Alabama
Previous article
Carnival Triumph Loses Propulsion Due to Fire
Next article
Life On Board Disabled Cruise Ship Deteriorates